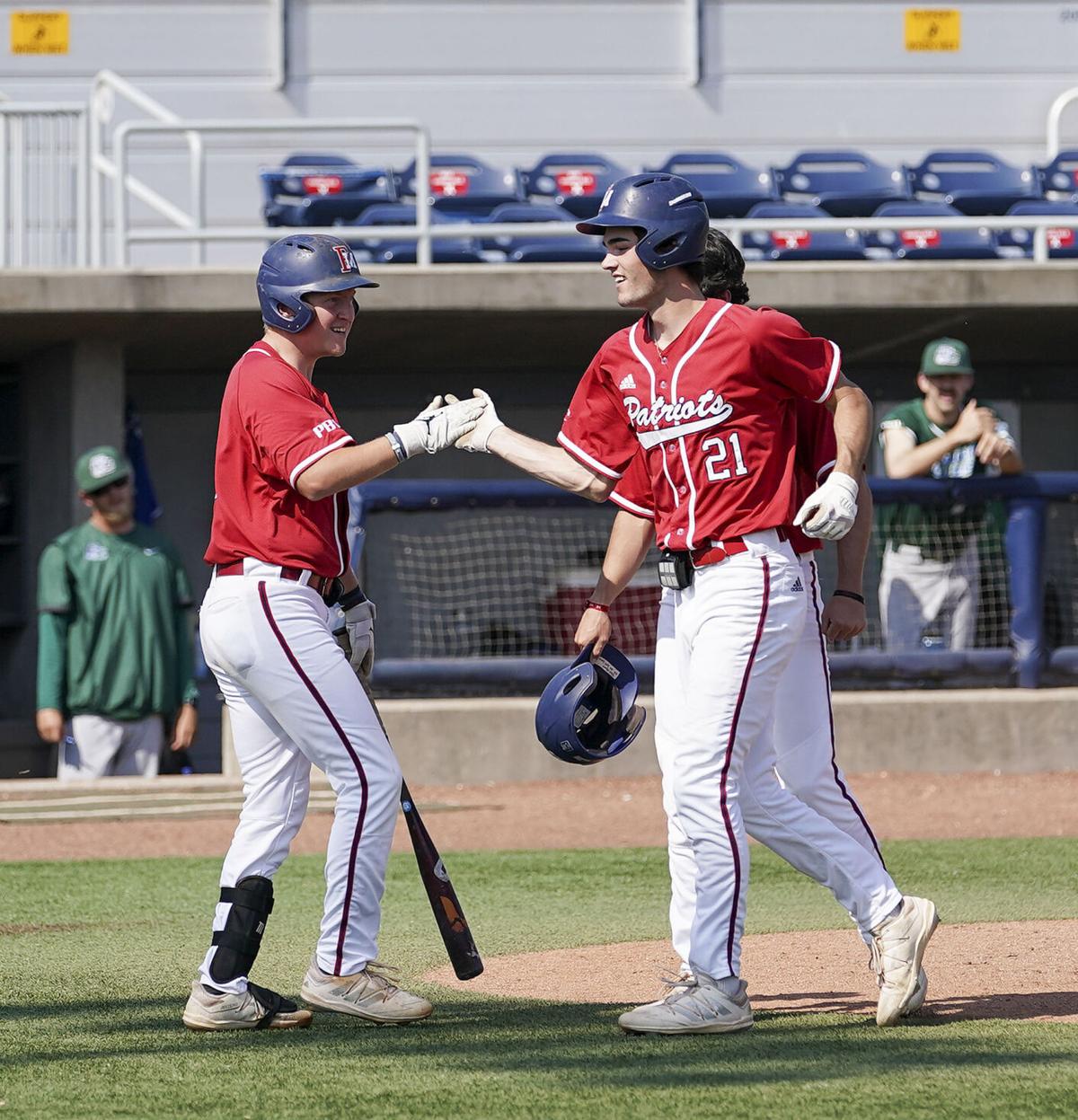 Jack Hegan (21) is congratulated by a teammate after hitting a fourth-inning grand slam during game one of Francis Marion's doubleheader against Georgia College on Wednesday at Sparrow Stadium. 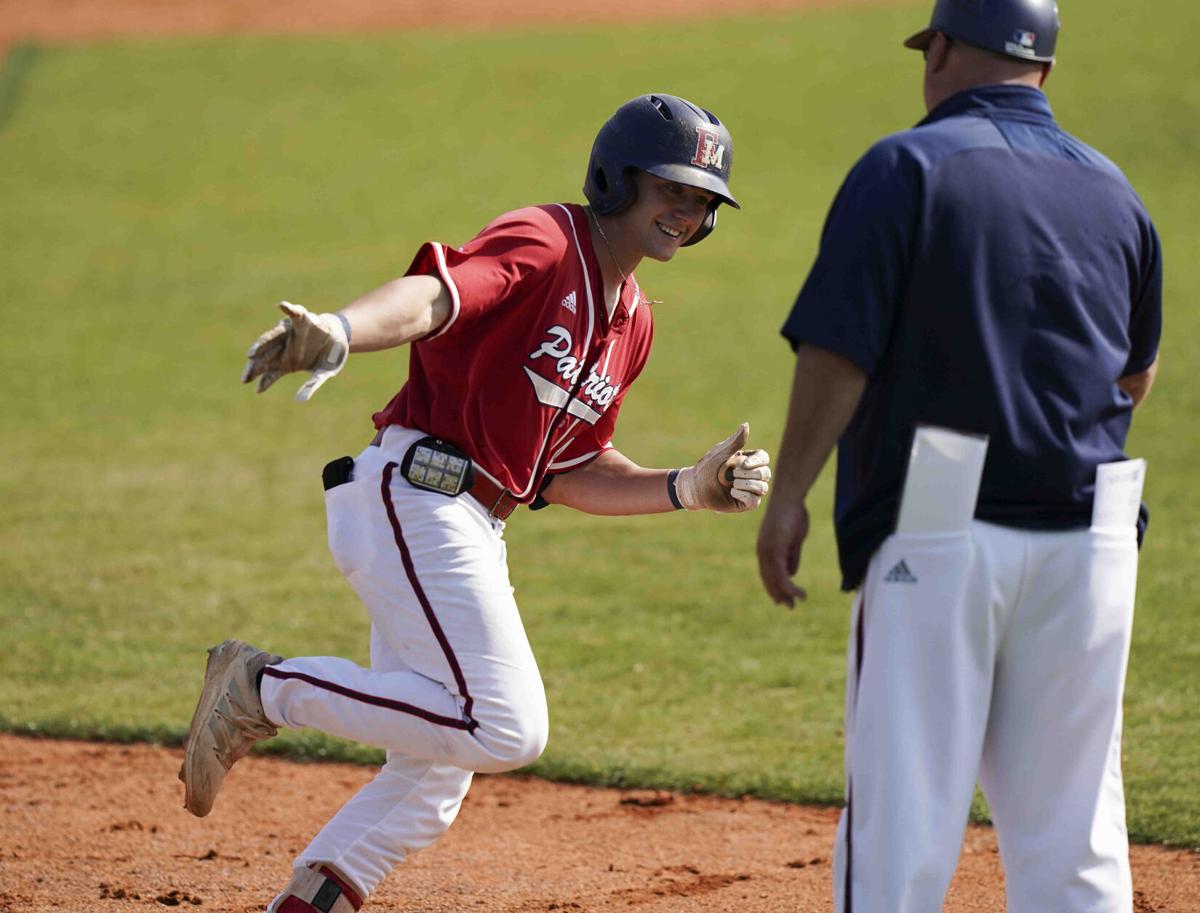 Tanner Wakefield (49) is congratulated by Francis Marion coach Art Inabinet after hitting a two-run homer in the Patriots' 14-6 victory over Georgia College on Wednesday in the opening game of a doubleheader at Sparrow Stadium.

FLORENCE, S.C. – Jack Hegan was mired in a bit of a slump entering Wednesday’s makeup doubleheader against Georgia College.

The Francis Marion University sophomore was 4 for 36 in his last nine games, and entered Sparrow Stadium 0 for his last 10 as the Patriots looked to grab a couple of key Peach Belt Conference victories.

Hegan broke out of his slump in a big way – and his fourth-inning grand slam started to turn the tide as FMU’s offense exploded in a 14-6 victory over the Bobcats.

Francis Marion will now travel to 16th-ranked UNC Pembroke for a three-game series starting on Saturday.

“I’ve been in a slump for a few weeks and it felt good to just finally connect on something,” Hegan said of his fourth-inning blast. “…It definitely felt like we just kind of took off from there, for sure.”

Hegan went 3 for 5 in the opener and drove in six – adding a two-run single in the fifth inning as part of FMU’s 16-hit barrage.

The Patriots, who were held scoreless through the first three innings, turned a 3-0 deficit into a blowout the rest of the way.

“We got a bunch of hits consecutively, and that’s how you put big innings up,” Francis Marion coach Art Inabinet said. “Really proud of these guys. We’re missing a lot of key hitters right now, and those guys hadn’t complained and said we’re missing anybody.

“They just got out there and got the job done in that game today.”

The combination of Hegan and Tanner Wakefield was key as the duo combined to drive in nine of the Patriots’ runs. An inning after Hegan’s fireworks, Wakefield connected on the first long ball of his career with a two-run shot.

He added an RBI single in the sixth as he extended his hitting streak to nine games.

“Tanner’s got some surprising power,” Inabinet said. “He’ll do that every now and then, even in batting practice he’ll juice one up against the scoreboard. Happy for him – he’s seeing the ball really well right now and hopefully that continues.”

Inabinet also praised the outing by reliever Chas DeBruhl, who was making just his second appearance all year. The freshman went four innings and allowed just one run, unearned, on no hits with one walk and two strikeouts.

“The guy’s had one outing all year and he came in against one of the best hitting teams in the conference and went four innings and only gave up one run,” Inabinet said. “So proud of him.”

Will Hardee, Kolby Crepeau and Mickey Skole each had two hits for FMU. Todd Mattox had a hit to extend his steak of reaching base safely to 32 straight games. He made it 33 in the nightcap.

The Patriots were also able to overcome five errors in the field. Of the six runs the Bobcats scored, only three were earned.

Miscues were costly in the second game as well for FMU. Of the eight Bobcat runs, only four were earned.

GC starter Byrson Smeltzer went five innings and allowed just one earned run with seven strikeouts to get the win.

The Bobcats led 8-3 in the ninth before the Patriots plated a pair of runs on a Bill Hanna homer. He drove in three of FMU's runs in the second game, with Mattox and Skole getting the other two.

Will Hardee and Austin Moore each had two hits.

Jack Hegan (21) is congratulated by a teammate after hitting a fourth-inning grand slam during game one of Francis Marion's doubleheader against Georgia College on Wednesday at Sparrow Stadium.

Tanner Wakefield (49) is congratulated by Francis Marion coach Art Inabinet after hitting a two-run homer in the Patriots' 14-6 victory over Georgia College on Wednesday in the opening game of a doubleheader at Sparrow Stadium.