Packers vs. Buccaneers: Scores and updates from the NFC championship 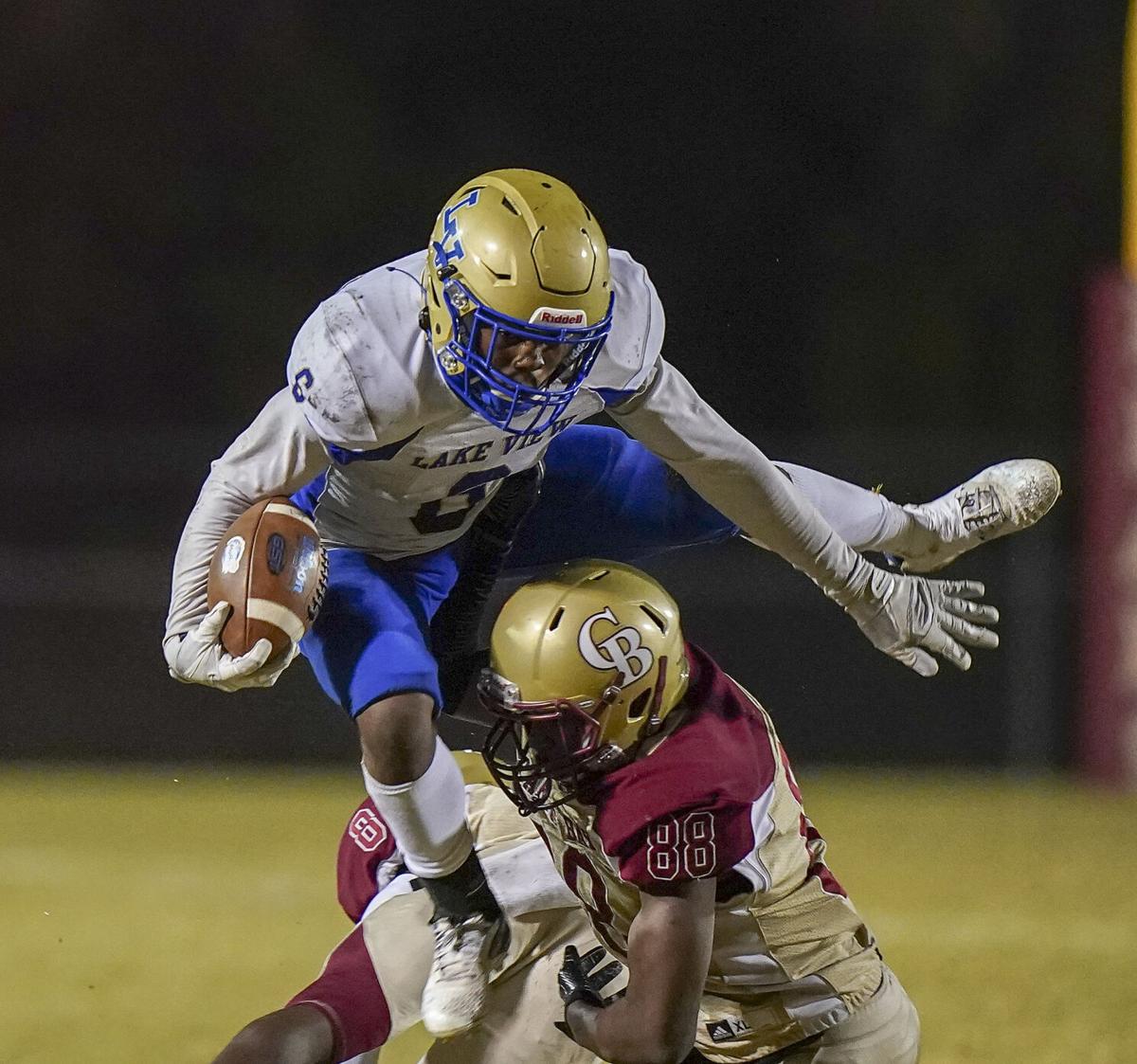 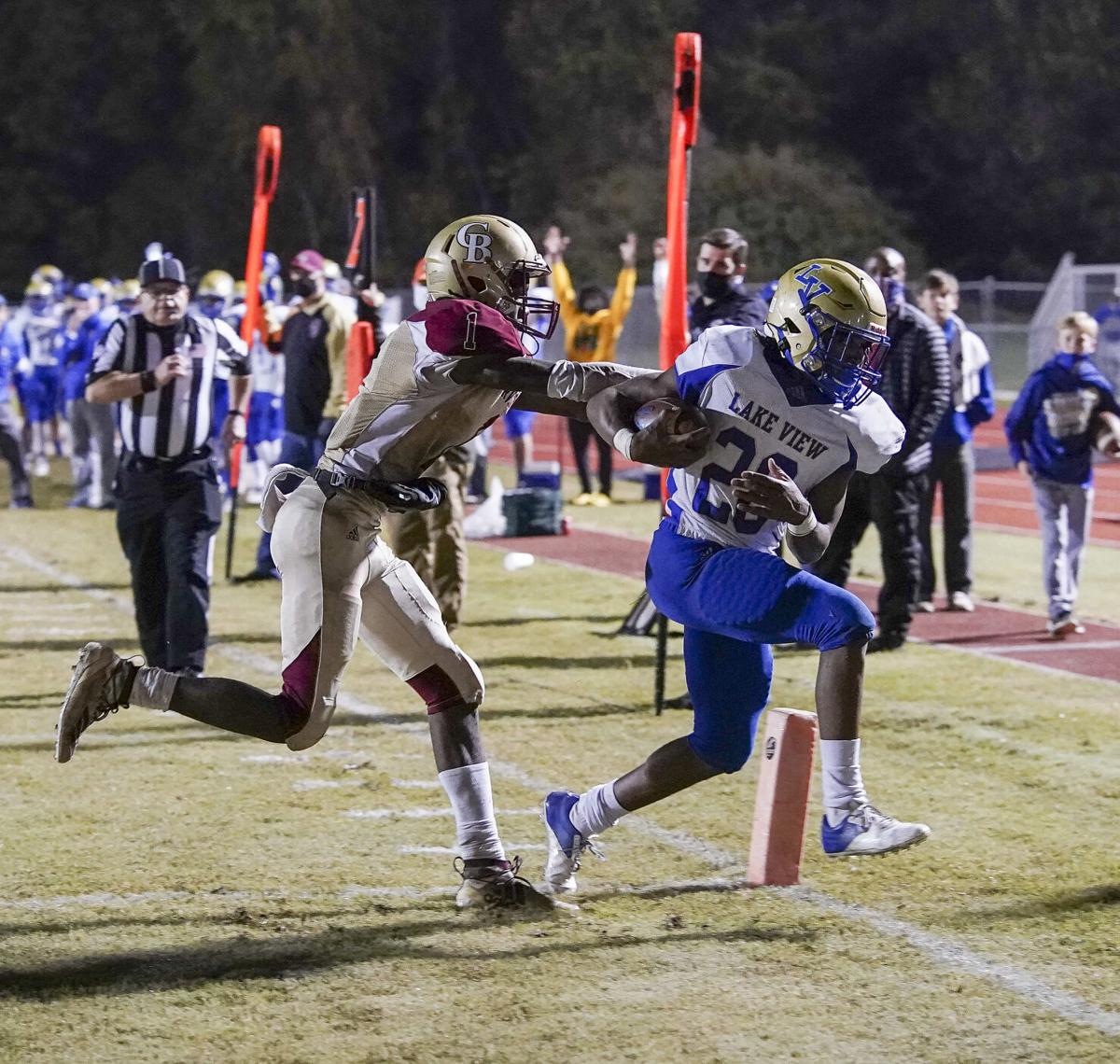 Lake View's Ja'Correus Ford (28) crosses the goal line ahead of a shove by Carvers Bay's M.J. Bromell (1) during the Wild Gators' 30-22 victory Friday in the 1A state playoffs. 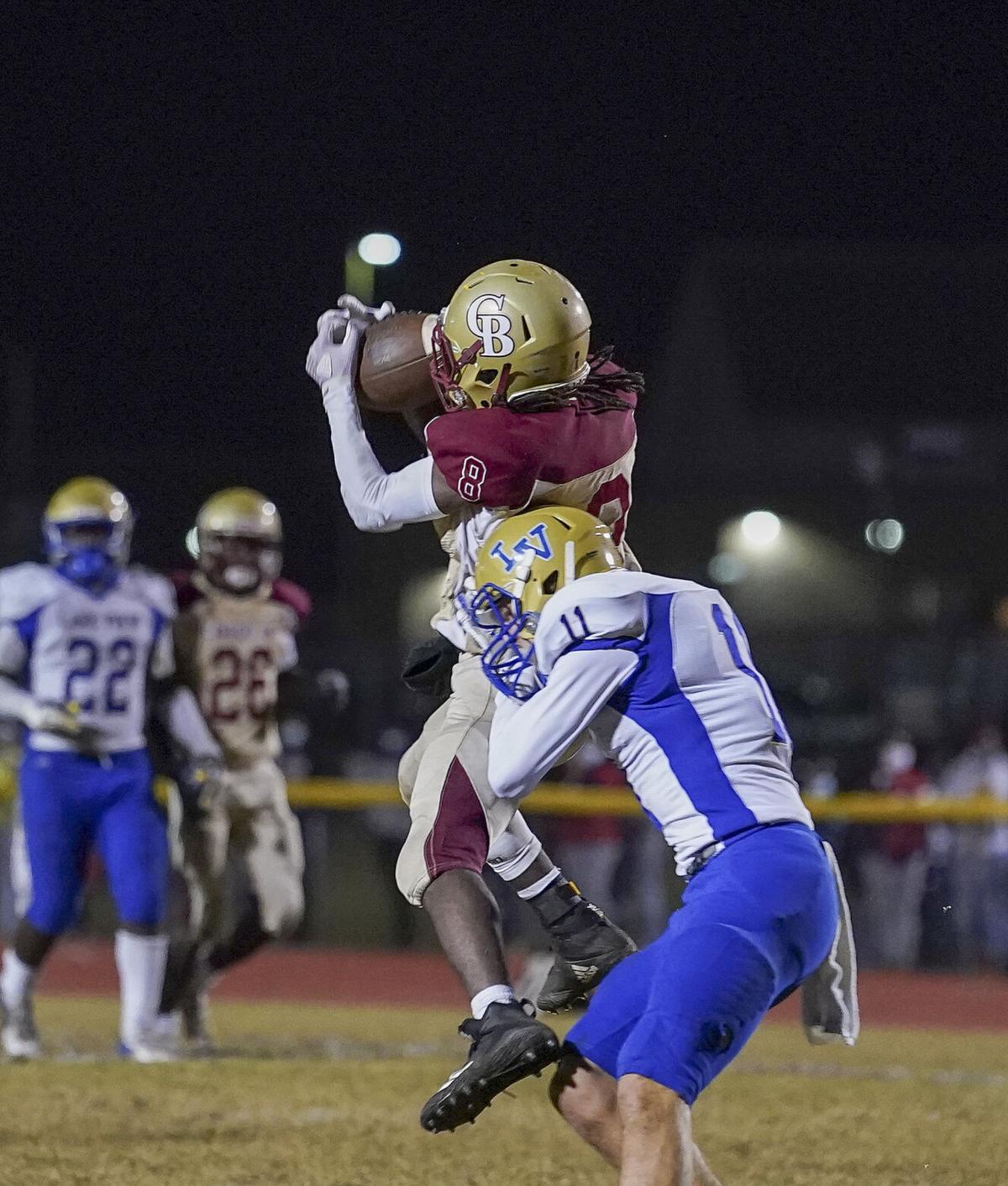 Lake View's Braxton Dimery (11) puts a shoulder to Carvers Bay's Tony Bell (8) as he tries to catch a pass Friday.

But he’ll probably just stick with the last one. That one sealed a 30-22 victory.

“Bottom line is, when we needed to make a play, we did,” he said. “All the stuff before that is neither here nor there now.”

Instead, the Wild Gators (7-0) can focus on what’s ahead of them – hosting Bamberg-Ehrhardt this week for the 1A lower state championship.

Adarrian Dawkins and Michael McInnis broke up a pass in the end zone as Carvers Bay quarterback Kayshaun Brockington was trying to hit M.J. Bromell for a potential tying score in the final seconds at Big Bear Stadium.

That ended a late-game surge by the Bears (6-2), who were attempting to come back from a 16-point deficit.

“We were one play away against the top-ranked team in the state,” Carvers Bay coach Matt Richard said. “Coming off a 2-5 season, our guys have nothing to hang their heads about. I believe next year we’ll learn our lessons from this and move on and be better.”

The Bears found themselves in a hole thanks to a dominant second half of play by Lake View. For nearly a quarter and a half, the Wild Gators held the ball for all but 11 plays – running 26 of their own by comparison.

“But it was a great overall team effort.”

LVHS turned a 14-14 halftime stalemate into a two-score advantage behind its rushing attack. Dawkins put the Wild Gators up 22-14 in the third on a 5-yard run. Ja’Correus Ford – who led all rushers with 26 carries for 187 yards – added his third score of the night in the fourth quarter on a 7-yard run as Lake View took a 30-14 lead.

But it was the Carvers Bay passing attack that got the Bears back in the game. Brockington completed three passes of more than 20 yards on their next drive and took it in himself from 3 yards out to cut Lake View's lead to 30-20. He then found Bromell for the 2-point conversion as Carvers Bay was back in business with 3:34 left.

Lake View recovered the ensuing onside kick, but the Bears' defense bowed up to get the ball back at the Carvers Bay 20 with exactly one minute to go.

Brockington guided his team all the way down the Lake View 17 – connecting with Bromell on a 30-yard pass along the way – but his final three pass attempts fell incomplete.

“I think the biggest thing in the second half was we had a few drops that we should have caught, but again we were one play away," Richard said. "We make no excuses. The standard is the standard here.”

Running back Joshua Walker completed his strong junior season with a big game for the Bears. He had 88 yards on 13 carries and both of the first-half touchdowns for Carvers Bay.

Brockington wound up completing 10 of 20 passes for 167 yards with 92 of those going to Bromell and Tony Bell.

Dawkins finished with 94 yards for Lake View while Ford also had two receptions – the only two of the game as the Wild Gators did not attempt a pass in the second half.

Ford scored both of Lake View's first-half TDs on long runs of 61 and 28 yards, respectively.

NEXT GAME: Lake View will host Bamberg-Ehrhardt next Friday at 7:30 p.m. for the 1A lower state championship.

FLORENCE, S.C. – All of Region 6-4A’s teams will be in some sort of action Monday.

Powell: Wilson boys will be locked in when season resumes

Winter sports will go on in FSD 3 after all

LAKE CITY, S.C. -- Florence School District 3 has reversed its decision to cancel the Lake City High School winter sports seasons and will all…

FLORENCE, S.C. — All of Region 6-4A’s teams will be in some sort of action Monday.

HARTSVILLE, S.C. — Mike Adams goes every day to the grave of his late son, Dylan. After losing the 13-year-old to cancer in October, he’s taki…

JOHNSONVILLE, S.C. — Florence School District 5, which is represented on the high school level by Johnsonville, resumed practice Tuesday and w…

Lake View's Ja'Correus Ford (28) crosses the goal line ahead of a shove by Carvers Bay's M.J. Bromell (1) during the Wild Gators' 30-22 victory Friday in the 1A state playoffs.

Lake View's Braxton Dimery (11) puts a shoulder to Carvers Bay's Tony Bell (8) as he tries to catch a pass Friday.