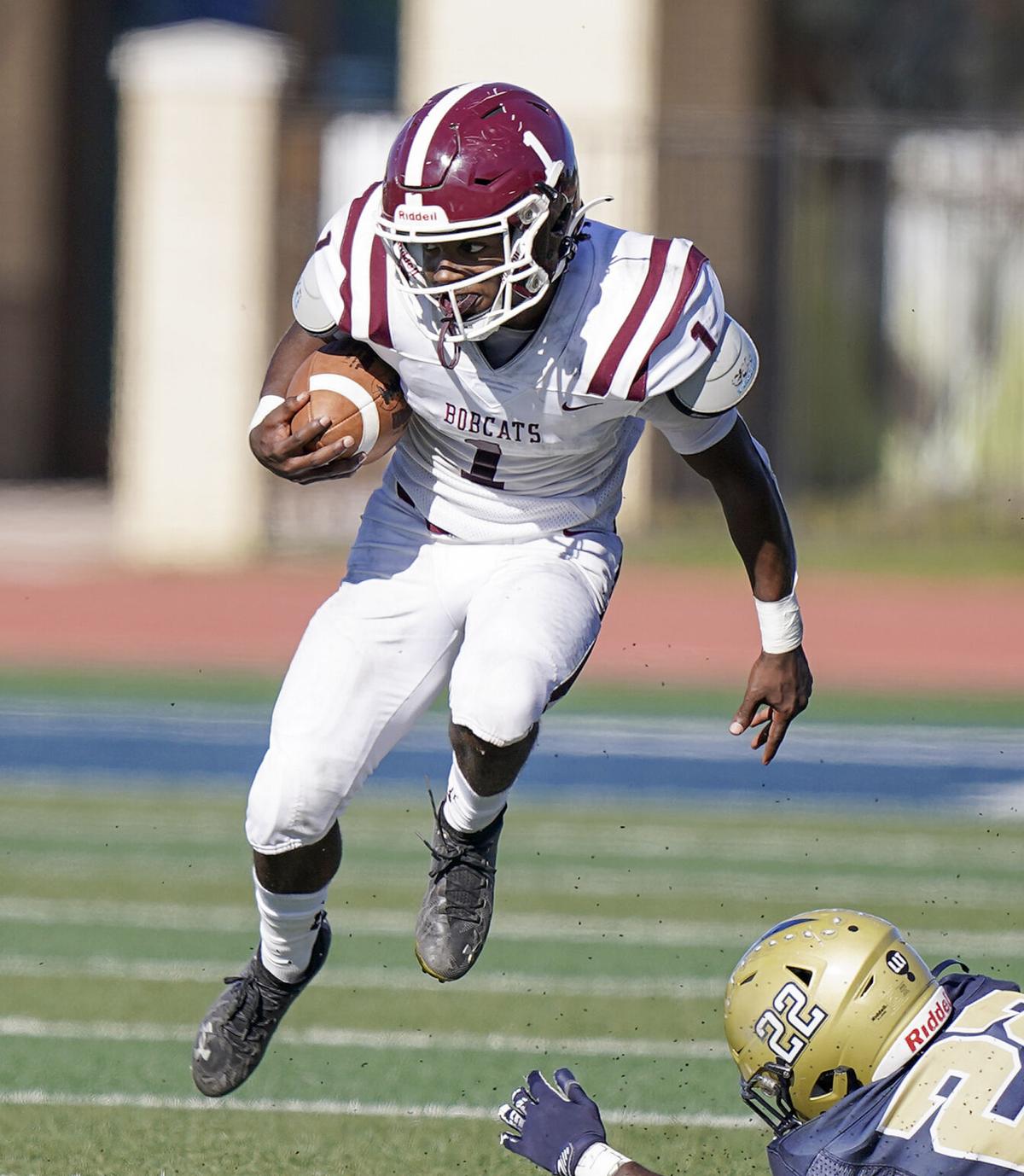 The Carolina Academy's Austin Brown (1) leaps over a defender during a state championship game against Hilton Head Christian on Saturday in North Charleston. 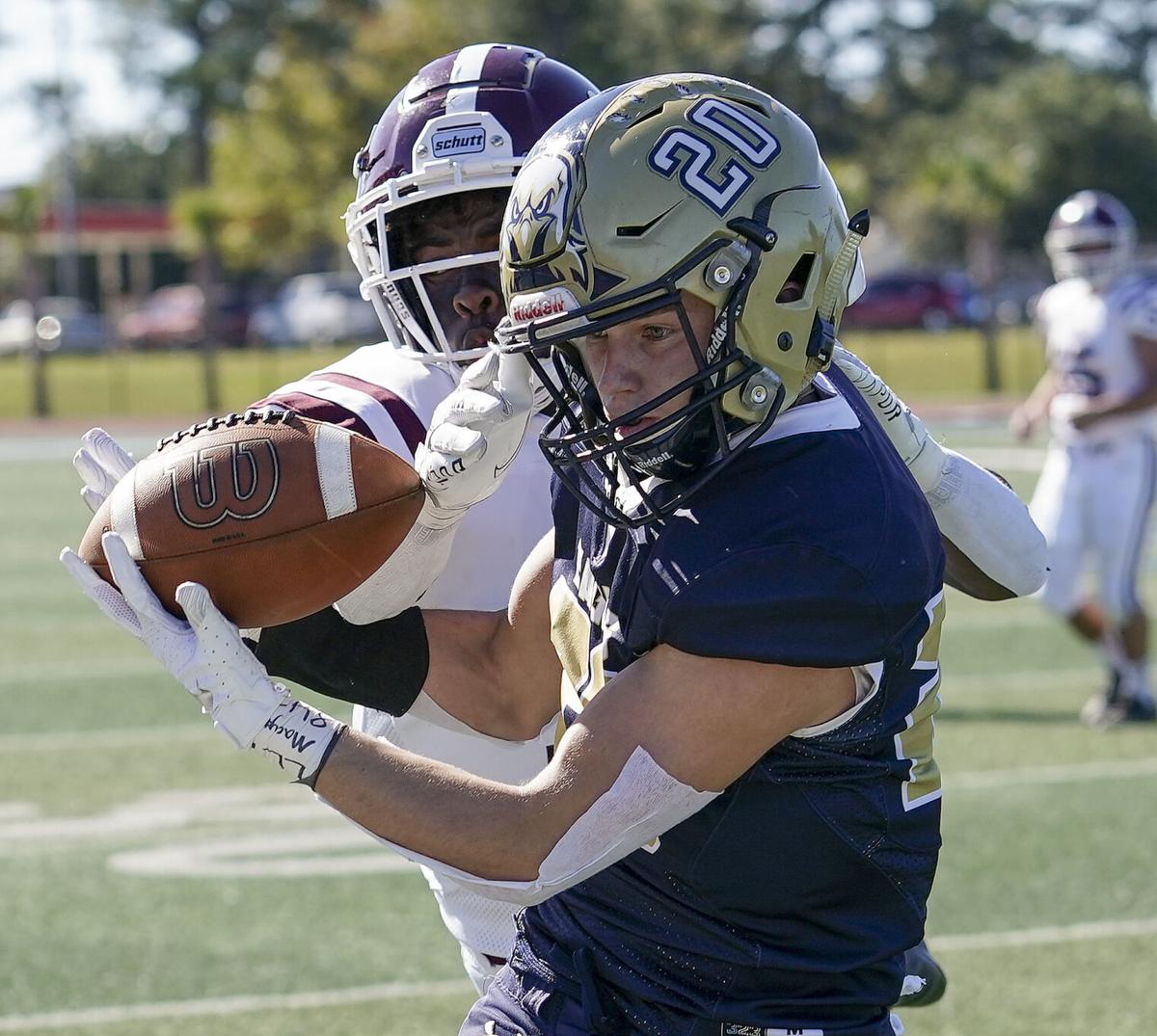 The Carolina Academy's George Wilder (3) gets a hand on the ball to break up a pass intended for Cameron Strickland (20) during a state championship game Saturday against Hilton Head Christian in North Charleston.

NORTH CHARLESTON, S.C. — When a state championship is out of reach, a team can either wilt or try for at least one positive memory.

A series. A play. Anything.

After Hilton Head Christian scored the SCISA Class 2A state championship game’s first 35 points Saturday at Charleston Southern University in what eventually would end as a 42-14 score, coach T.J. Joye’s Carolina Academy Bobcats were determined to do just that.

The results were 14 points during the Bobcats’ final three drives.

“The thing I try to teach my kids is to never give up, no matter what adversity you’re in,” Joye said. “That’s why I love football so much. If you get knocked down, get up and try again. That’s the only thing I told them: ‘Look, this is life. Nobody is going to feel sorry for you. Let’s try to score and do what we can', and we did. We put 14 on the board.”

After rushing the ball for most of Saturday’s game, the Bobcats reached deeper into their bag of tricks to finally get something going. Star running back Austin Brown completed a 22-yard pass to Matt Gaskins. A short time later, Gaskins caught a 33-yard pass on fourth- and-long from Joye’s son, Matthew, before George Wilder put the Bobcats on the board Saturday for the first time.

T.J. Joye, the Florence County sheriff-elect who finished his 23rd and final year as the Bobcats’ coach Saturday, then drew from his days in the state patrol while being a supervisor and Troop 5 lieutenant and applied it toward his team.

“I’ve been in some bad altercations on the road and all over the place. And if I gave up, I’d be dead,” Joye said. “Just get back up and continue the journey.”

Although the Eagles responded with yet another touchdown, the Bobcats kept pushing on their final possession. After Carolina held Hilton Head Christian on fourth down, Matthew Joye connected with Gaskins for a 36-yard touchdown, and then again for the two-point conversion. Joye finished with 118 total yards (91 passing), and Gaskins had three catches for 91.

“But it was a little too late against a team like that,” T.J. Joye said.

And Hilton Head Christian is quite the team, bouncing back from losing in overtime to Trinity-Byrnes last year in the state final and storming through this season undefeated.

For all the impressive defense Carolina Academy played during the first half Saturday, Hilton Head Christian was even better at conversions on third-and-long to keep scoring drives alive. After forcing the Eagles to punt on their opening possession, they faced third-and-20 from the Bobcat 39 – only for quarterback John Patrick Peduzzi to complete a 27-yard toss to Cameron Strickland. Then, after the Bobcats forced fourth-and-goal from the 3, James Crosby took a pitch and scored for a 7-0 lead.

Although the Bobcats stuffed Hilton Head Christian at the CA 1 on the Eagles’ next possession, Joye’s team was too far back in its own territory, and Wilder was tackled in the end zone for a safety. Then, starting at its 45, the Eagles drove and converted on fourth- and-15 from the Bobcats' 26 with a 23-yard run by Jace Blackshear. Blackshear scored a short time later to make it 16-0.

“They beat us, hands down,” T.J. Joye said. “They’re the better football team.”

Carolina Academy, which has based much of its offensive success on the rushing success of Brown, Wilder and Matthew Joye, simply was unable to carry that over into Saturday.

“We knew we had our work cut out. I knew we’d struggle up front,” Joye said. “We hadn’t executed well up front all year. We had great running backs that broke loose and then had great runs.”

Carolina Academy knew it had to convert a successful pass play to somewhat distract Hilton Head Christian from its running game. The first huge attempt was a flee-flicker that found no one open. Although that play did result in an 8-yard run by Joye, it put the Eagles’ defenders on their heels for the rest of the series. Carolina Academy advanced to the Hilton Head Christian 41 before Joye was sacked for an 8-yard loss. Then, on fourth down, a pass by Joye while being tackled was intercepted by Peduzzi.

Things did not get any better in the third quarter as the Eagles added 19 more unanswered points. The first 12 points were indirect and direct results of Carolina Academy turnovers. After recovering an early Bobcat fumble, Jackson Lanier caught a 20-yard TD pass from Blackshear. After Peduzzi returned a Joye interception 55 yards for a score, the Bobcats then attempted to go for it in its own territory. After Hilton Head Christian stopped that, Lanier eventually powered his way into the end zone from the 2 to give the Eagles their 35-0 lead.

But Joye is proud of other acts of resilience than two fourth-quarter touchdowns. After his team was unable to play for a month because of COVID-19-related situations, just the fact the Bobcats made it to Saturday’s state final was quite a feat.

“I told my kids after the game that we’re blessed to be able to make it to this game,” T.J. Joye said. “We were out four games, and we didn’t even play for a month. We did a lot of praying that we would finish the season, and we did. And look where we are. And to be honest with you, we beat some teams we were not supposed to beat.

“I love the resilience in these kids. They went a month without actually practicing, and they never quit practicing. They were practicing like we were going to play Friday,” said T.J. Joye, who in his 23 years as coach guided the Bobcats to four state runner-up finishes in 8-man ball and Saturday’s second-place finish in 11-man.

With a sheriff’s sticker already on his cell phone, Joye was asked if there was a chance further down the road that he might return to coaching football.

But what the Bobcats know and learned from playing for Joye shined through late in Saturday’s game.

FLORENCE, S.C. – No matter which way Executive Director Neal Zimmerman and the Boys & Girls Clubs of the Pee Dee Area went, they always hit a wall.

SUMMERTON, S.C. — The Hartsville boys' basketball team’s Cesare Edwards scored 11 points in the 51-34 loss to Sumter at the Zaxby’s Tip-Off at…

The Carolina Academy's Austin Brown (1) leaps over a defender during a state championship game against Hilton Head Christian on Saturday in North Charleston.

The Carolina Academy's George Wilder (3) gets a hand on the ball to break up a pass intended for Cameron Strickland (20) during a state championship game Saturday against Hilton Head Christian in North Charleston.