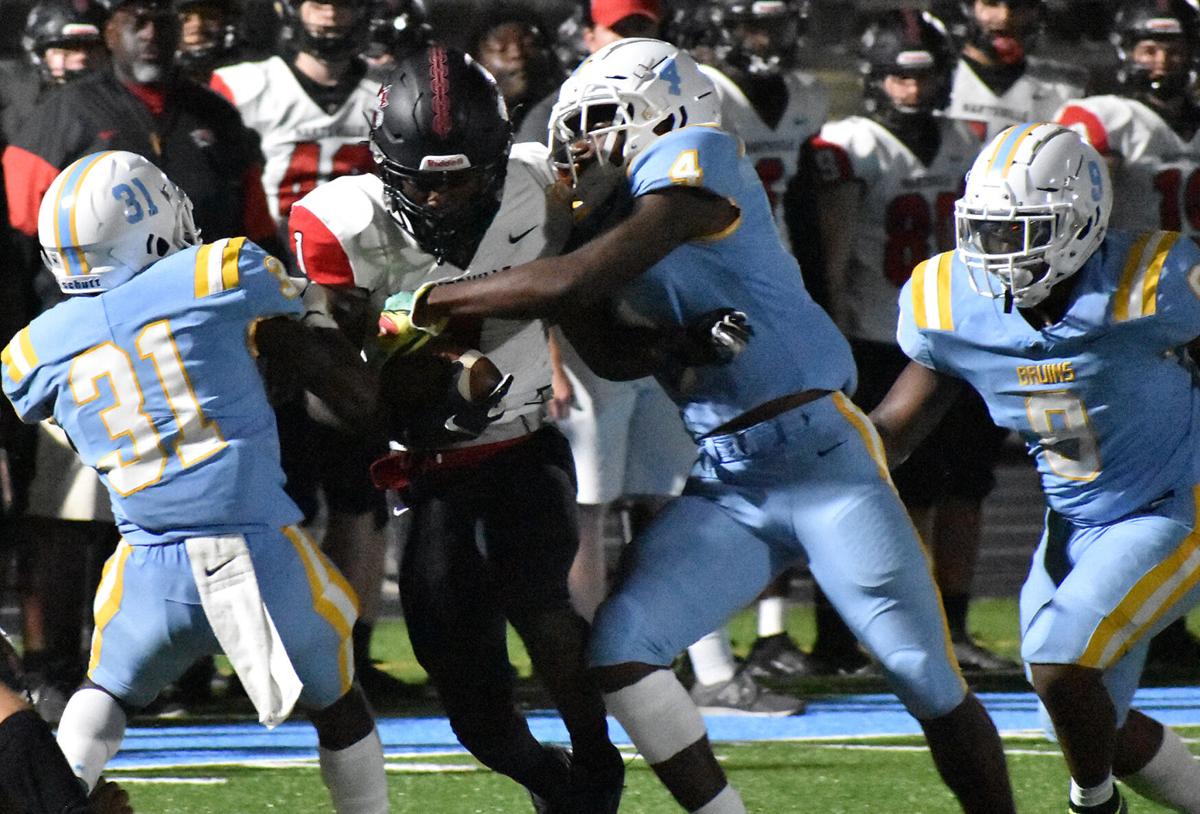 Hartsville running back Carmello McDaniel (1) is taken down by South Florence defenders Eric Cooper (4) and Dashad McFadden (31) during the Bruins’ 28-21 victory Friday. 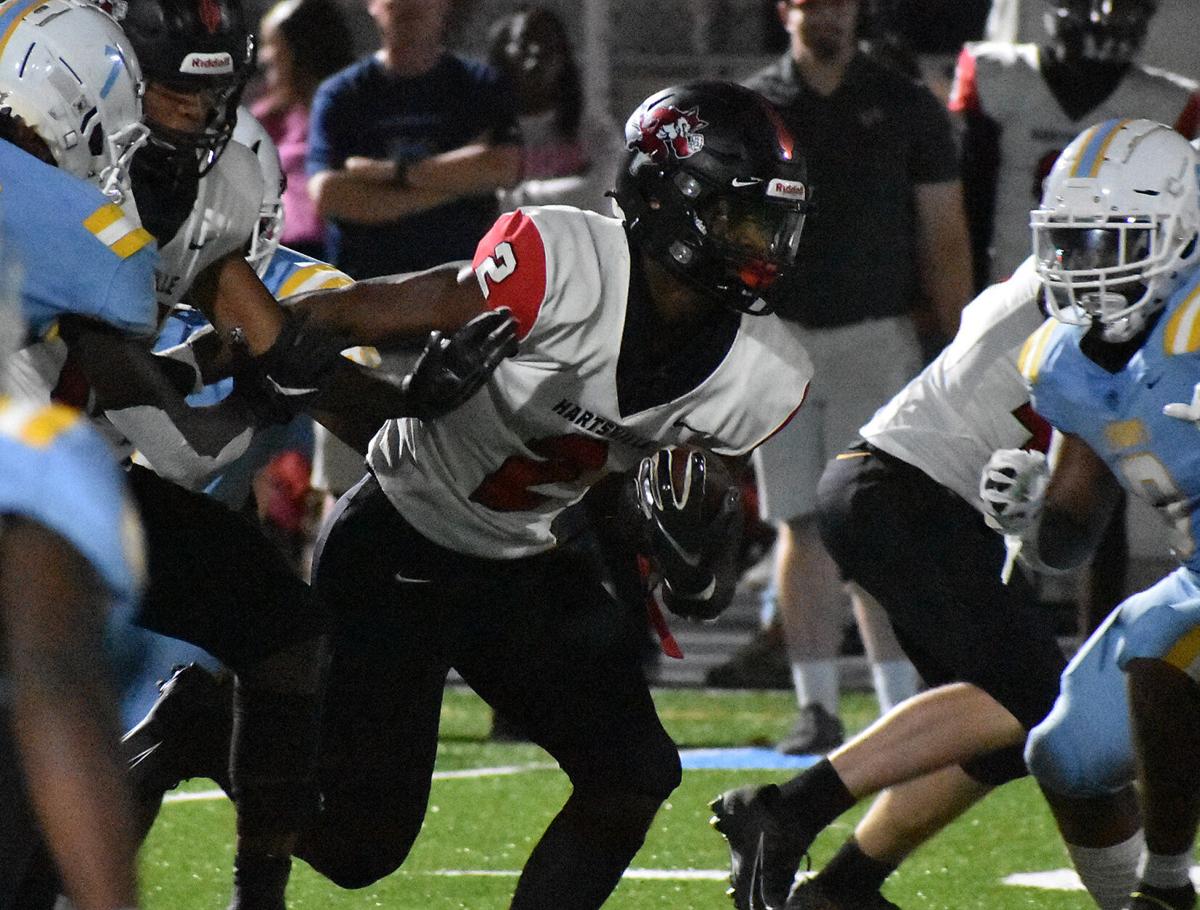 Hartsville’s J’Shawn Anderson (2) breaks away for a run Friday during a 28-21 loss to at South Florence. 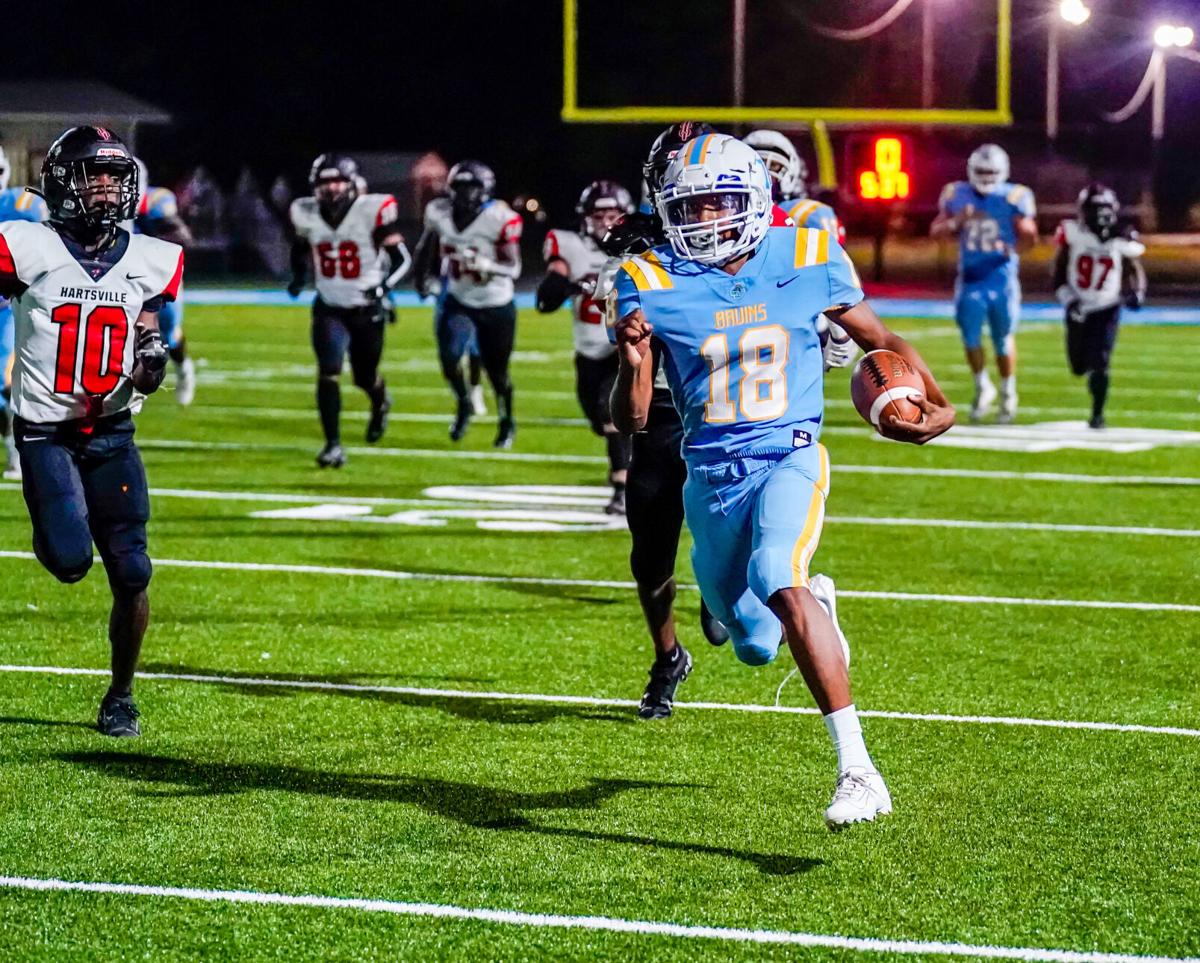 And like many other times this season, the second-year South Florence coach wasn’t disappointed.

With the Bruins up by a touchdown with 6:25 to go, Hartsville mounted its last rally attempt of the night – driving to the South Florence 19-yard line before the final pass from McKendrie Douglas fell short as the Bruins’ defense held on for a 28-21 victory at Bruin Stadium.

“Our defense, man … they really, really played well tonight,” Marlowe said after his team improved to 7-1 overall. “Other than that first drive, they really tightened down and kept us in the ballgame.

“We knew we were going to have to have them to win the game, and they did a phenomenal job.”

South Florence’s defense came away with two turnovers and three sacks – two by senior defensive lineman Xavier Barr to help set up an even bigger game this week against Myrtle Beach. Both teams are 4-0 in Region 6-4A play with two games remaining – meaning next Friday’s game in Florence will be for the region championship.

“We’re really excited. This is where we hoped we would be,” Marlowe said. “Myrtle Beach is a really good team…totally different from these guys. They’re alike in that they’ve got a system them believe in; they’re really, really good at it.

“So we’ve got to have a great, great week of practice to compete with those guys next week.”

The Bruins will also need a similar defensive effort and more big plays from their offense like they got Friday. They scored 28 points in the first half against the Red Foxes with three of the touchdowns covering 48 yards or more.

The game was tied at 7-7 in the first quarter when South Florence used a trick play near midfield. Quarterback Quincy Rhodes threw the ball back to wideout Evin Singletary behind him and Singletary then connected on a 48-yard bomb to Jabari Johnson to put South Florence up 14-7.

The game probably changed in the Bruins’ favor for good in the second quarter. After a 71-yard by J’Shawn Anderson tied things at 14-14, Rhodes ran 75 yards on the next play from scrimmage to put South Florence back in the lead.

He added a 50-yard run to close the half, finishing with 11 carries for 158 yards and the two TDs. He also threw a 25-yard TD pass to Singletary to open the scoring for the Bruins in the first quarter.

“We made some explosive plays,” Marlowe said. “Quincy did a phenomenal job tonight keeping the ball a couple times. We didn’t think he’d get to keep it as much as he did, but boy we were glad when he got into open space. He’s shifty, and he’s hard to tackle.”

That was it from the South Florence offense the rest of the night, as the Hartsville defense clamped down as well. The Bruins had only four offensive possessions in the second half until the final two minutes and just three first downs.

“I think the first half, we weren’t where we were supposed to be and we didn’t make the plays that we were supposed to,” Red Foxes coach Jeff Calabrese said. “The second half, we did. That’s really the difference. We had three run-fit issues, and they broke big runs and then we had coverage on a guy that we quit covering.

“So it’s not many mistakes, but those four cost you against a very good football team, and that’s what happened defensively.”

Hartsville had a big night from its two main running backs, which both crossed the century mark. Anderson finished with 161 yards and the one touchdown and Carmello McDaniel had 103 yards and a touchdown, a 34-yard romp that brought the Red Foxes back to within 28-21 at the end of the third quarter.

But Hartsville could not pick up short yardage on a fourth-down play on its first possession of the fourth quarter, and the other drive stalled at the Bruins’ 19-yard line that essentially ended the game.

“We had a chance at the end of the game to tie things up or maybe go ahead and just couldn’t complete the task,” Calabrese said. “This is a playoff-type football team in a playoff atmosphere, and our young team needs to grow up and figure out how to win some of these, because right now I think this is the fourth game we’ve lost within seven points.

“So we’ve just got to figure out how to get on the right side of these things.”

Hartsville running back Carmello McDaniel (1) is taken down by South Florence defenders Eric Cooper (4) and Dashad McFadden (31) during the Bruins’ 28-21 victory Friday.

Hartsville’s J’Shawn Anderson (2) breaks away for a run Friday during a 28-21 loss to at South Florence.