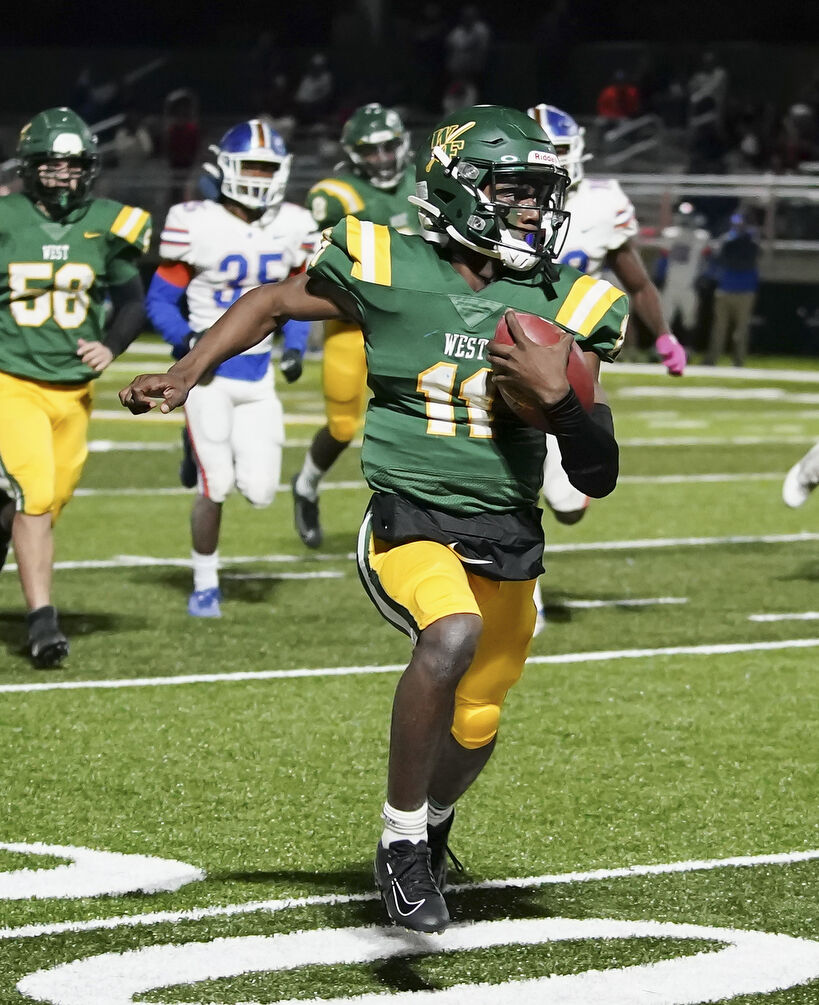 West Florence quarterback Deuce Hudson (11) runs the ball for a touchdown Friday during the Knights’ 38-15 victory over James Island at Knight Stadium in the opening round of the 4A state playoffs. 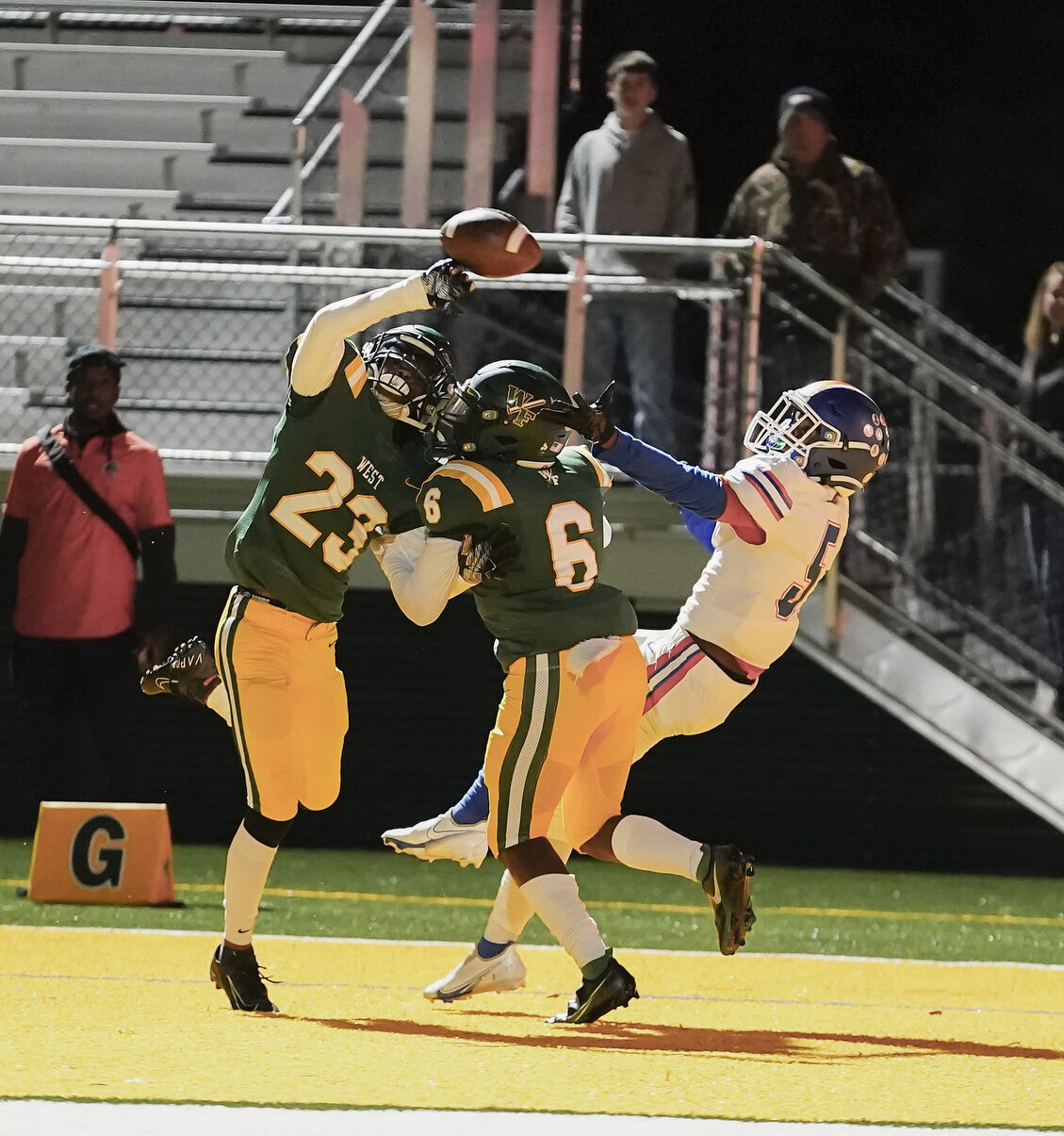 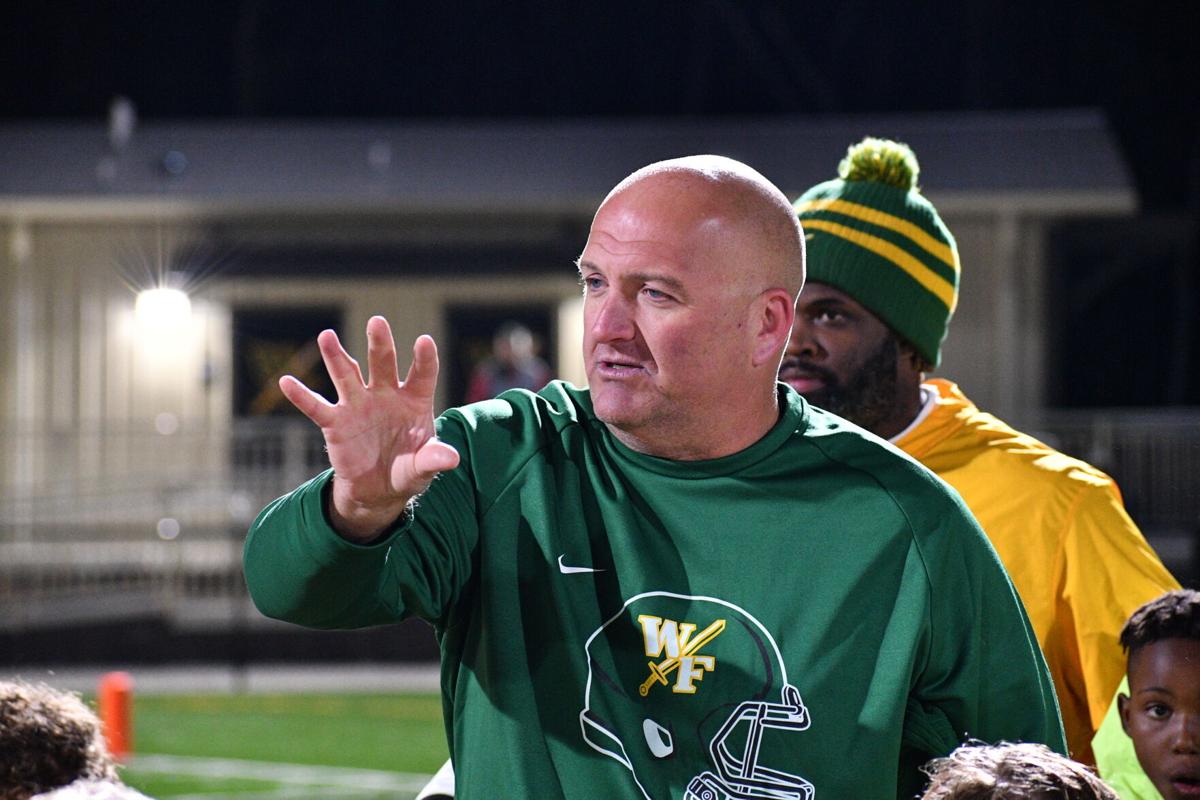 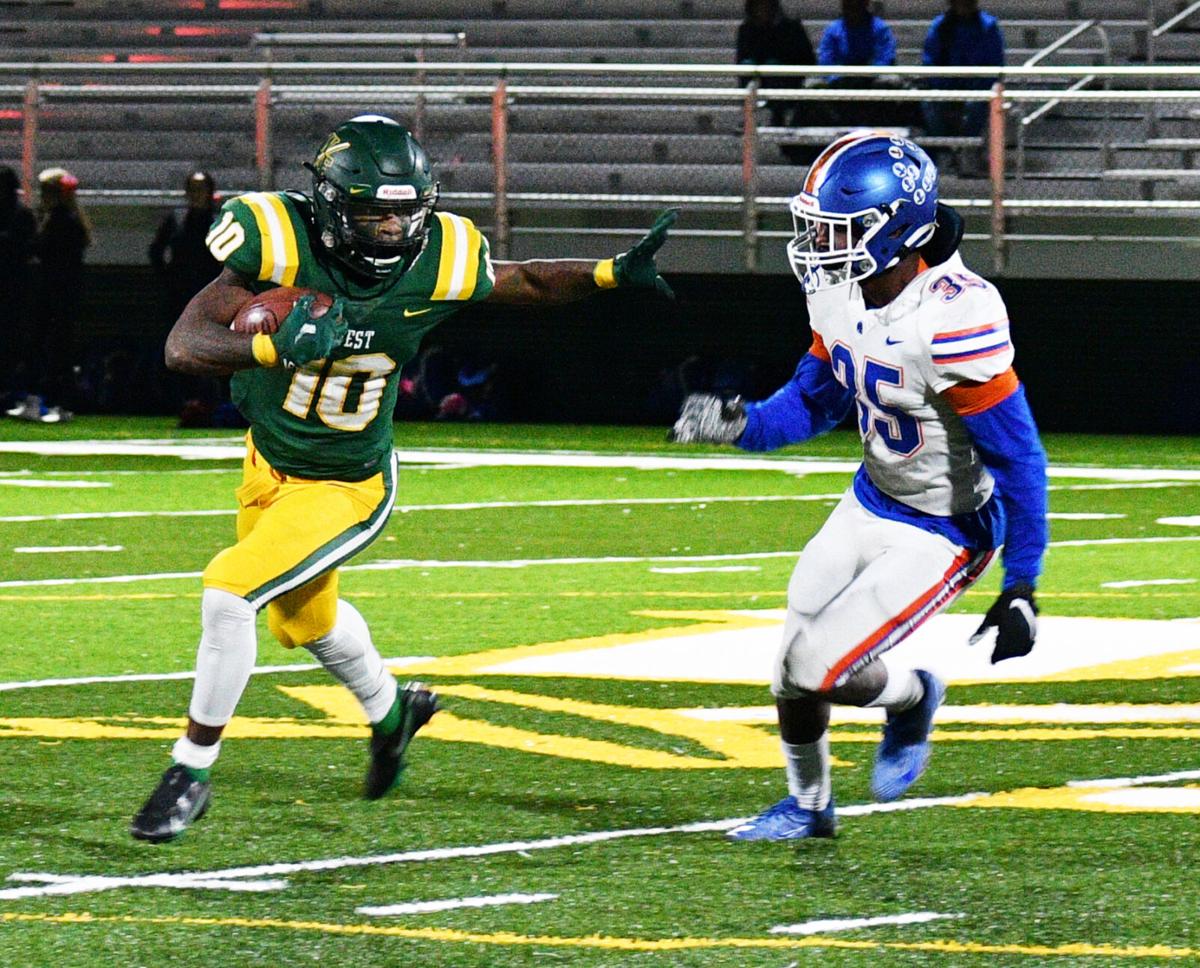 FLORENCE, S.C. — West Florence coach Jody Jenerette stated the obvious after his team’s 38-15 win over James Island in Friday’s first round of the Class 4A postseason.

“Defense travels in the playoffs,” he said.

The Knights intercepted two first-quarter passes, converted them into touchdown drives and never looked back. By game’s end, they had four interceptions.

West, which became the first Florence One Schools football team to not only host a playoff game, but win it, now plays 7:30 p.m. this Friday at South Aiken. The Thoroughbreds advanced by winning 28-14 at home over Wilson.

Before looking ahead, Jenerette reflected on Friday’s win.

“I can’t say enough about these guys,” Jenerette said. “We had two starters go down (Brody Cook, stomach illness before game; Dashawn Gamble, knee injury last week against South Florence). One of them was tonight at 7:25 (game time was 7:30). I had not ever had something like that happen before. So I can’t say enough about our defense. Those guys, they play every week.”

West’s Darren Lloyd intercepted a Braxton Scott pass, and running back Terry McKithen scored the first of his three touchdowns (he finished the game with 188 rushing yards) for a 7-0 Knights lead.

Another Trojan next drive ended when Steven Smalls made an interception. That led to a 2-yard rushing TD by Lloyd, which gave West a 14-0 advantage with 2:27 left in the opening quarter. After defense played such a prominent role in the Knights’ 28-27 win last week over South Florence, Jenerette was glad to see his unit come through again.

“(James Island) is a good football team. When I was watching film, I was like, ‘These guys are pretty good. They’ve got really good bodies; they’ve got like five or six guys who can really play,’” said Jenerette, whose team’s other two interceptions were made by Nashaun Frison and Tyler Brantley. “I was just happy with our guys to come out and do it again. We put our foot on their throats in the second half and played the way we were capable of playing.”

After the Trojans got on the board with a touchdown pass from Braxton Scott to Liam Nixon in the second quarter, West stretched its lead back to double digits, 21-7, with a 33-yard TD pass from Deuce Hudson to McKithen.

In the third quarter, after Sam Spence made a 24-yard field goal, West’s Avion McBride broke up a fourth-down pass in the end zone. Starting at its own 16, West then got to its 42, and McKithen broke loose for a 58-yard touchdown.

“We needed Terry to pop one,” Jenerette said. “He had not popped one in a long time. He got that one tonight, and that was a big play for us. When Terry’s rolling, we’re a pretty good football team.”

Spence’s ensuing kickoff bounced off a James Island player and the Knights recovered it around midfield. A couple of plays later, Hudson raced downfield for a 43-yard touchdown.

“I’ll tell you, we might be the latest blossoming offense in the history of high school football,” Jenerette said. “But we’re going to blossom at some time. And hopefully, it’s next Friday in the second round.”

Friday’s win was especially meaningful to Jenerette since it was West’s first playoff win since 2018.

“We’re obviously making history here every Friday night,” Jenerette said, referring to the team’s first on-campus playoff game and win. “But we also had not won a first-round playoff game here in two years. It was time to get the monkey off our back, so I’m glad we did that. This team is fun to coach. I love this group to death. I’m ready to get back on the bus and play next Friday.”

These rare photos show Tom Brady from his baseball days

FLORENCE, S.C. − West Florence's defense came away with four interceptions during a 38-15 victory over James Island on Friday at Knight Stadiu…

West Florence quarterback Deuce Hudson (11) runs the ball for a touchdown Friday during the Knights’ 38-15 victory over James Island at Knight Stadium in the opening round of the 4A state playoffs.