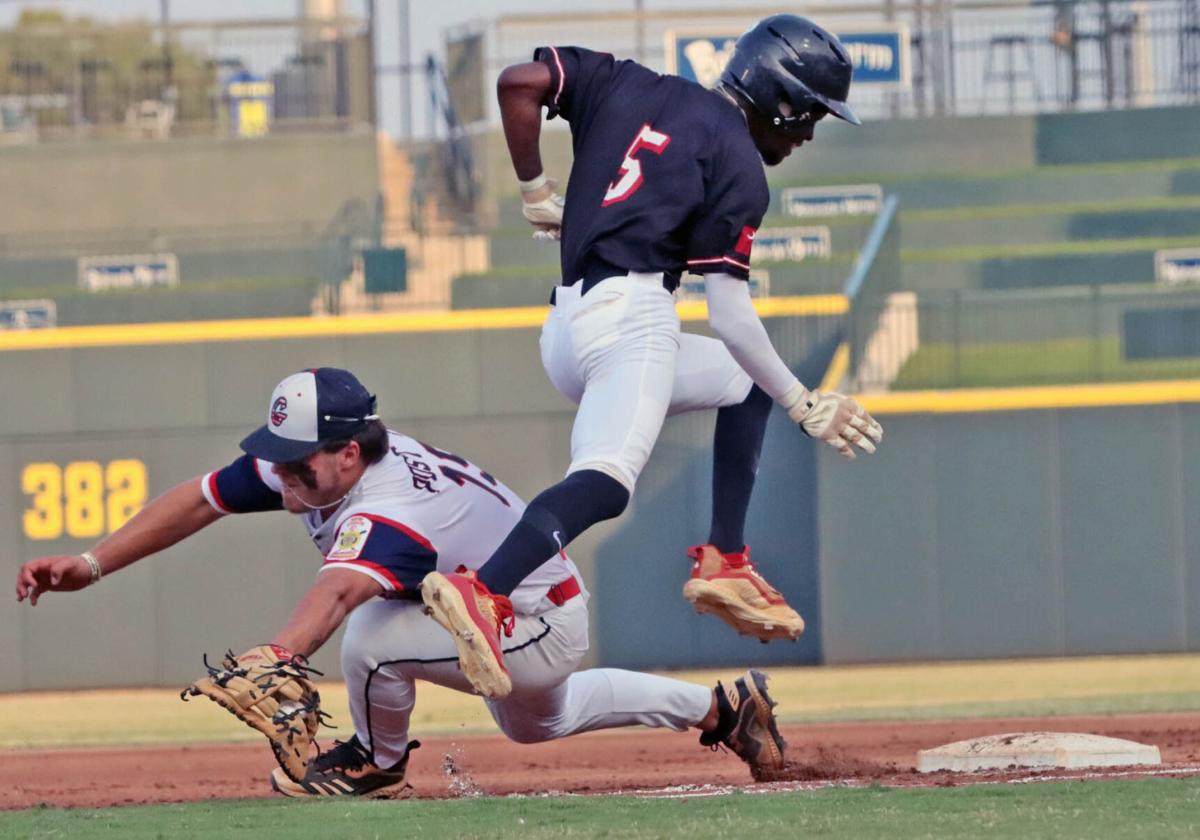 Florence's D.P. Pendergrass reaches on a bunt single to start the bottom of the first inning for Post 1. 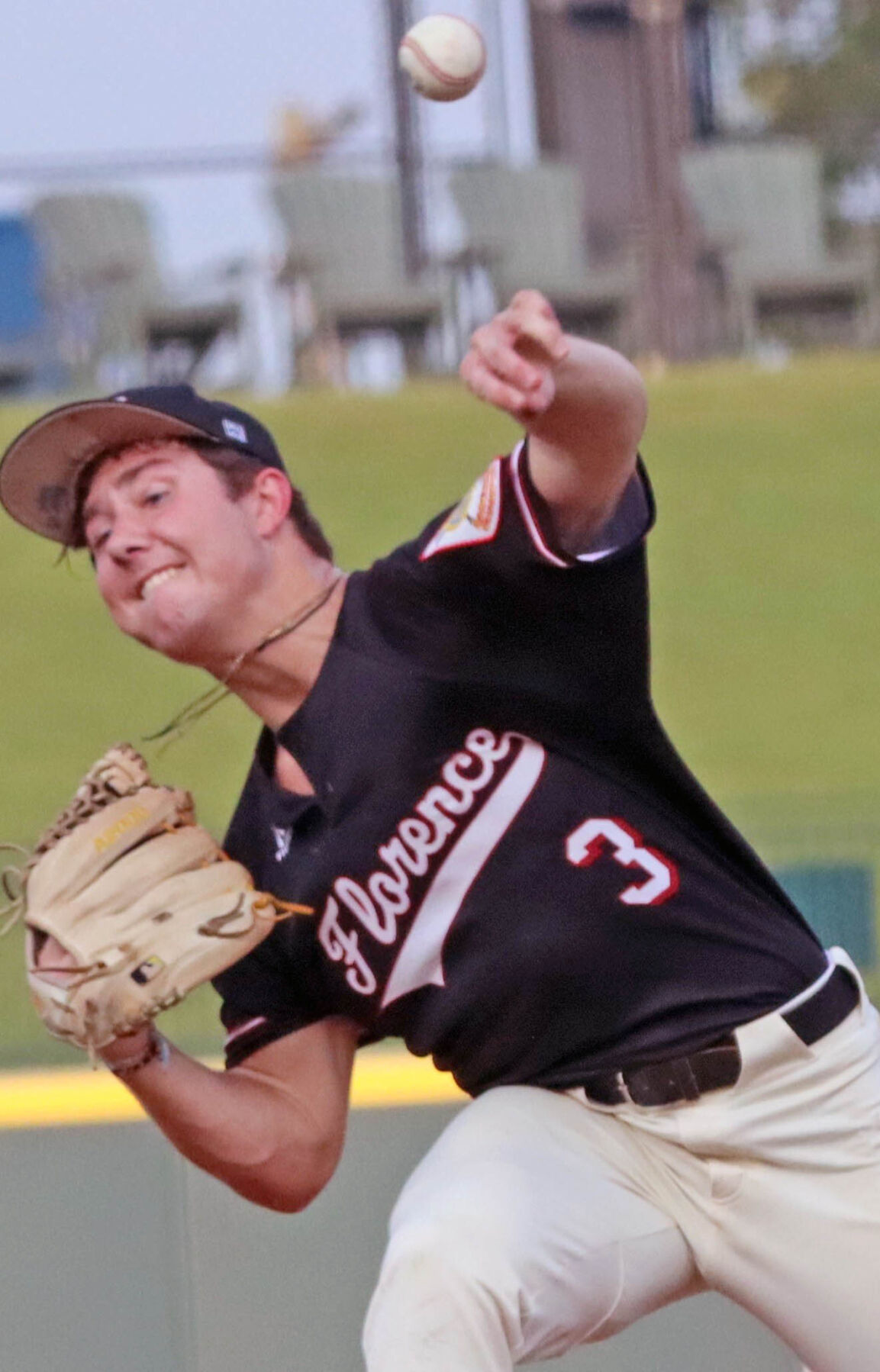 Florence's George Derrick Floyd throws during the first inning of Friday's game against Greer at Segra Park in Columbia, S.C.

COLUMBIA, S.C. — Florence is on its biggest stage this season, playing in the main draw of the American Legion state tournament. On Friday, Post 1 delivered its biggest performance.

George Derrick Floyd struck out eight batters in six innings, and Florence scored four in the first and won 10-0 over Greer at Segra Park. Post 1 will next play Fort Mill at 7 p.m. Saturday at Segra.

“That’s the best game we’ve played all year. And as far as in my coaching career, that’s one of the best performances on this stage that we’ve had,” Post 1 coach Derick Urquhart said. “We pitched outstanding, we played really good defense, we had timely hits. We took advantage of opportunities when they walked us and hit a couple of us. I thought it was a good game all around, and I’m really proud of the guys. But still, it doesn’t mean anything; we can’t take it for granted. We can’t take a night off and expect to come back and win Sunday.”

The game, called in the sixth inning because of the 10-run rule, featured 12 Post 1 hits. Four of Florence’s batters had at least two hits, and lead-off hitter D.P. Pendergrass had three.

After Floyd struck out two in the first inning, that momentum carried into the bottom half when Pendergrass beat out a bunt.

“That’s what we need out of (Pendergrass),” said Urquhart, whose team improves to 30-2. “He’s hitting for a high average, he’s getting on base and making things happen. Then, the batters at 2, 3 and 4 after him are doing their job of moving him around and getting him in.”

Case in point: Ashani McFarland followed Pendergrass in the first with a single of his own, and a bunt by Kody Hanna led to an error and Florence’s first run of the night. McFarland scored on a wild pitch; Hanna scored when Jacob Adams grounded into a double play, and Parker Winfield singled to left, bringing home the fourth run.

Urquhart talked about the job Floyd did, starting with his first inning that helped set the tone.

So does Floyd, a Citadel signee.

“My mindset going in was to just keep calm, pitch my game,” Floyd said. “I had not pitched a lot this year; I had a little bit of arm soreness. But I knew I had to come out tonight and just keep calm and throw strikes.”

Hanna doubled in the second inning and made it 5-0 when he scored on the first of two singles by Noah Carter (2 for 2).

Greer settled down after that, but Florence revved things back up in the bottom of the sixth to put the Warhawks away.

Pendergrass singled again. Then, on a strike three and passed ball, McFarland was safe because the catcher’s throw to first bounced off his shoulder. Pendergrass scored on a catcher’s error to make it 6-0, and Owen Taylor delivered an RBI single after that.

Adams followed with an RBI single to make it 8-0. Then, with the bases loaded, Florence won it after Winfield was hit by a pitch, and Pendergrass drew a walk.

Carter is hoping for repeat performances.

“We came out; we knew what we had to do. We knew they are a great team. We came out and we just handled business,” said Carter, a College of Charleston signee.

Florence's D.P. Pendergrass reaches on a bunt single to start the bottom of the first inning for Post 1.

Florence's George Derrick Floyd throws during the first inning of Friday's game against Greer at Segra Park in Columbia, S.C.