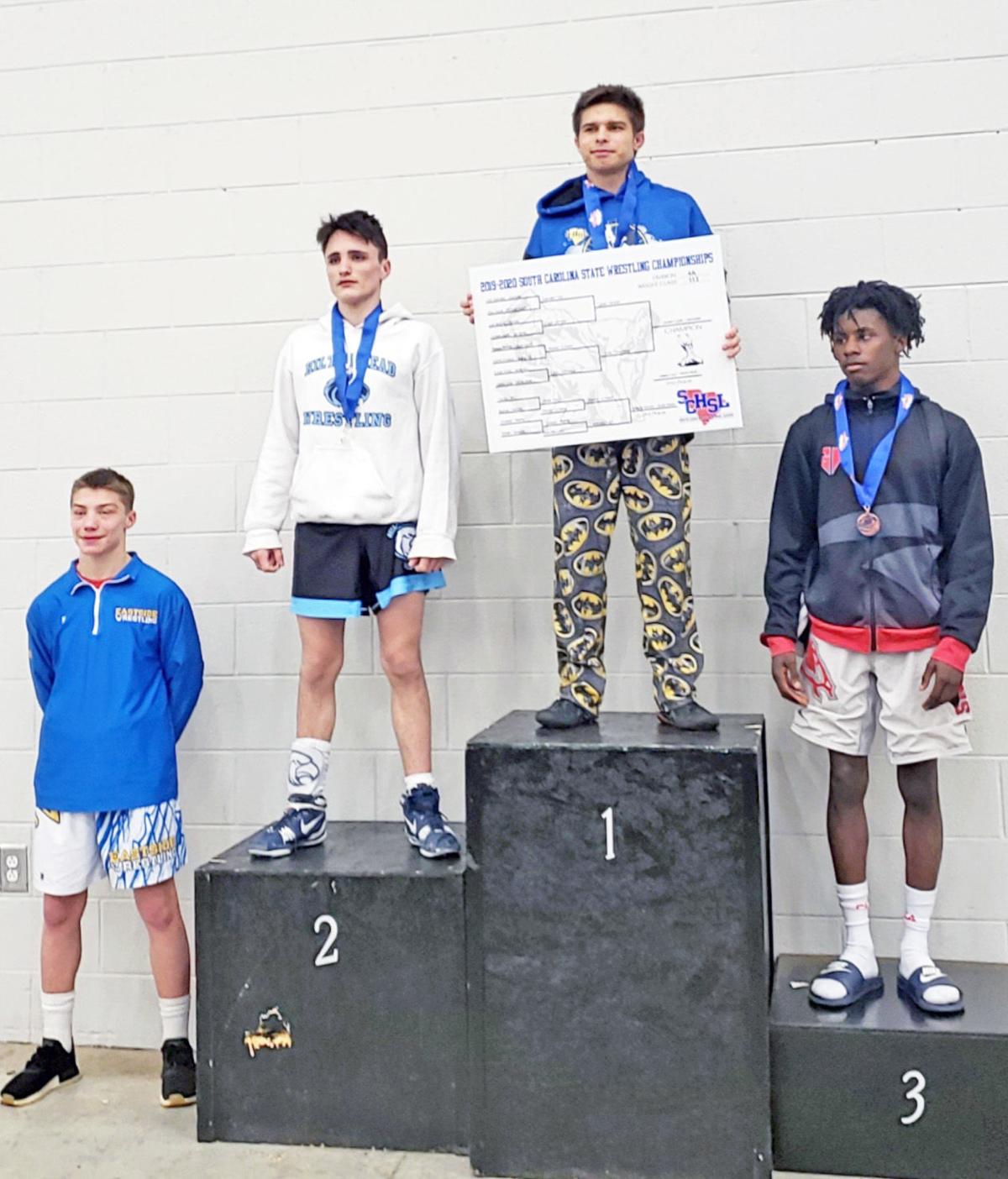 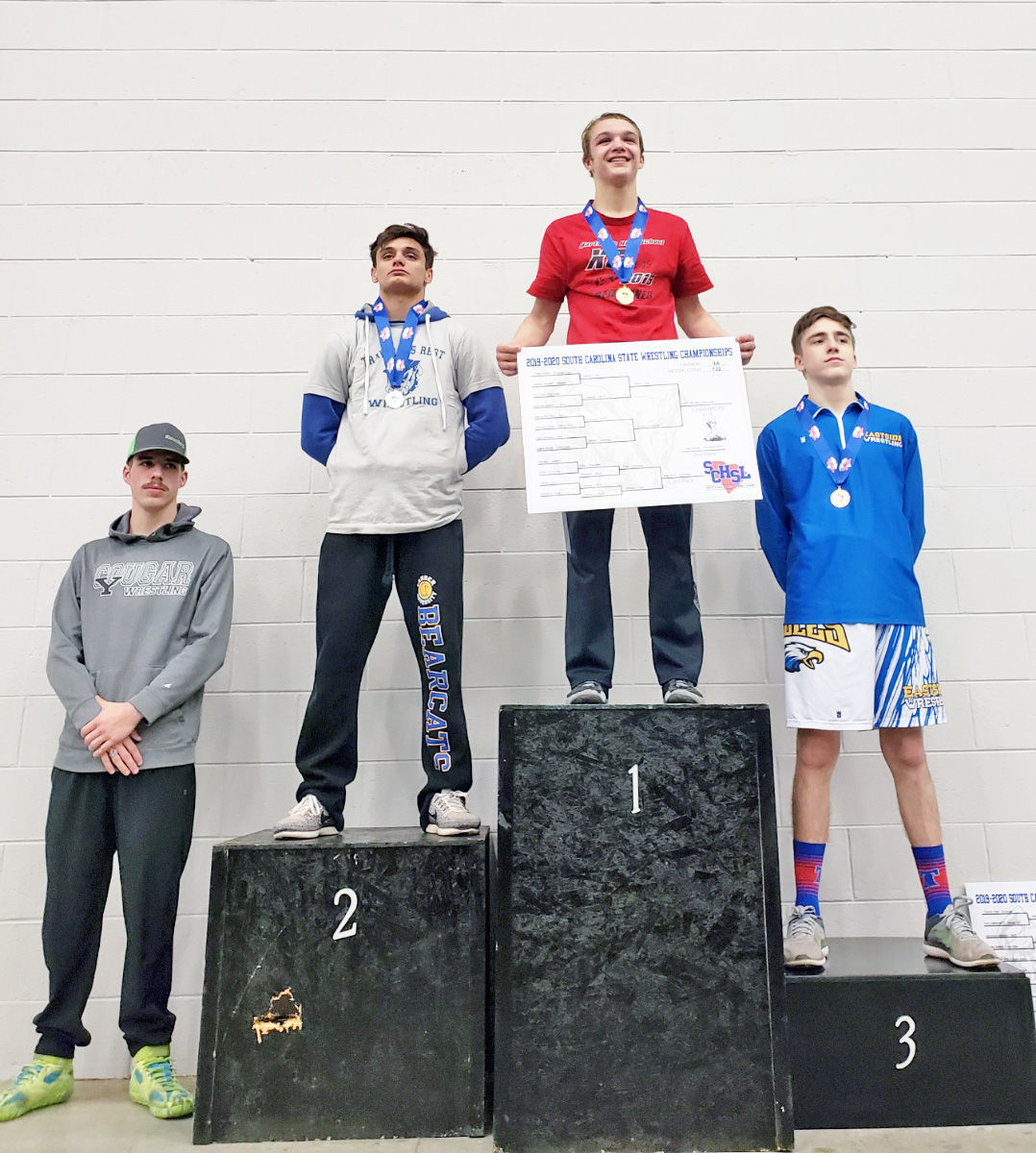 HARTSVILLE, S.C. — Hartsville’s Jordan Lynch and Logan Berger wrestled their way to the top of SCHSL Class 4A this past weekend in their respective weight classes.

Lynch, a senior and nephew of Red Fox coach Michael Lynch, won his 113-pound state final by a 10-7 decision over Hilton Head’s James Levy. And Berger, a sophomore, pinned Toby Foster of Travelers Rest in the third period while leading 11-0 to win the 132-pound state championship.

In last year’s state finals, Berger and Lynch were state runners-up at 113 and 120, respectively. But this latest performance was another jewel in this crown of a season for Hartsville, which finished as state runner-up in the 4A duals.

“This year’s team has broken lots of records this year,” Michael Lynch said. “I knew we should have a couple of state champs. Logan and Jordan both worked hard all year long, and they understand what it takes to be a champion. Lots of blood, sweat and tears. Jordan started wrestling when he was 8 years old, and Logan has been wrestling since he was able to crawl.”

After Lynch lost to Levy in this year’s 120 lower-state final by points in overtime, he was especially motivated to win the match against him that mattered most.

“Losing to (Levy) the first time worked in my favor because I knew all his moves this time,” Lynch said. “It was a big motivator, because losing the lower-state final made me very mad.”

As time ticked away in the third period, Lynch did not have to worry about looking at the clock.

“I didn’t have to try and look because people kept yelling the time at me,” said Lynch, who will compete in this weekend’s North-South All-Star Wrestling Matches at North Myrtle Beach High School. “My goal was to just work harder than the other guy.”

All that was left for Lynch was to stand atop the podium and celebrate.

“It felt really good. Working hard made it a lot easier,” Lynch said. “It now feels like everything I’ve worked for was accomplished.”

“Coming so close last year made me want it a lot more,” said Berger, who also won this year’s lower-state crown by pin. “Losing last year helped me to learn and know where I was. And, I wanted to be better.”

Then near the end of this year’s state final, Berger could hear the slap of the referee’s hand to the mat to signal his victorious pin.

“That was awesome,” Berger said. “It was pretty much what I worked for all season.”

Unlike Lynch, Berger did not have the advantage of having previously wrestled against his state final opponent.

“I had watched him a little bit,” Berger said. “So I knew he was a little bit of a leg-rider, and he was good on top. So my strategy was to grind him out until I could take the match.”

That was exactly what happened for Berger, whose father was a star wrestler at Oregon State. His father even wrestled in the 1986 South African Games and won his weight class.

After Jordan Lynch was asked what Michael Lynch told the two wrestlers before their state finals Saturday, the message was short and to the point.

“No matter what the score is, never give up,” Jordan said.

An eight-time APSE national award winner, Scott authored, "70 Years of Thrills and Chills, Drama and Dents at Darlington Raceway." Scott has received several SCPA awards, 8 for 1st place since moving to SC in 2010 from his home state of Georgia.

SUMTER, S.C. – Neil Minton has always stressed the importance of playing as a team.

MARION, S.C. – Marion boys basketball coach Andy Bostick in his first year as head coach guided his team to the Region 7-2A championship with a 62-43 win over rival Mullins Wednesday night.

FLORENCE, S.C. − Four players from the Pee Dee are honored by being placed on the Palmetto Champions All-Star Football Team, as determined by …

HARTSVILLE, S.C. -- Hartsville's Cesare Edwards was recently honored for surpassing 1,000 career points for the Red Foxes. He has signed to pl…

COLUMBIA, S.C. – The South Carolina Basketball Coaches Association announced its list of All-State selections and Players of the Year on Tuesday.

FLORENCE, S.C. -- The Williams Middle School girls' basketball team won the Florence One Schools championship Tuesday with a 32-31 win against…