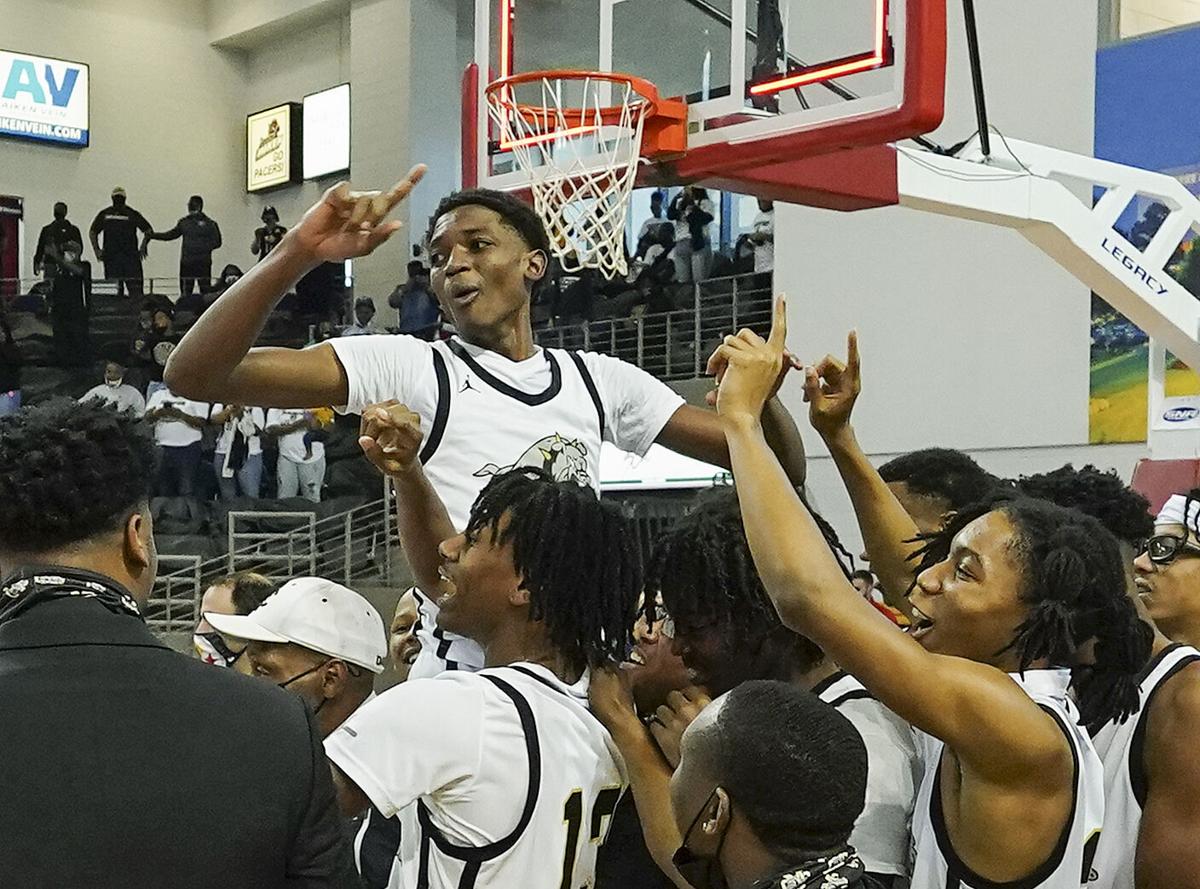 Marlboro County’s DeVonta Oliver is lifted by teammates as they celebrate their SCHSL Class 3A state championship victory over Seneca on Thursday in the USC Aiken Convocation Center. 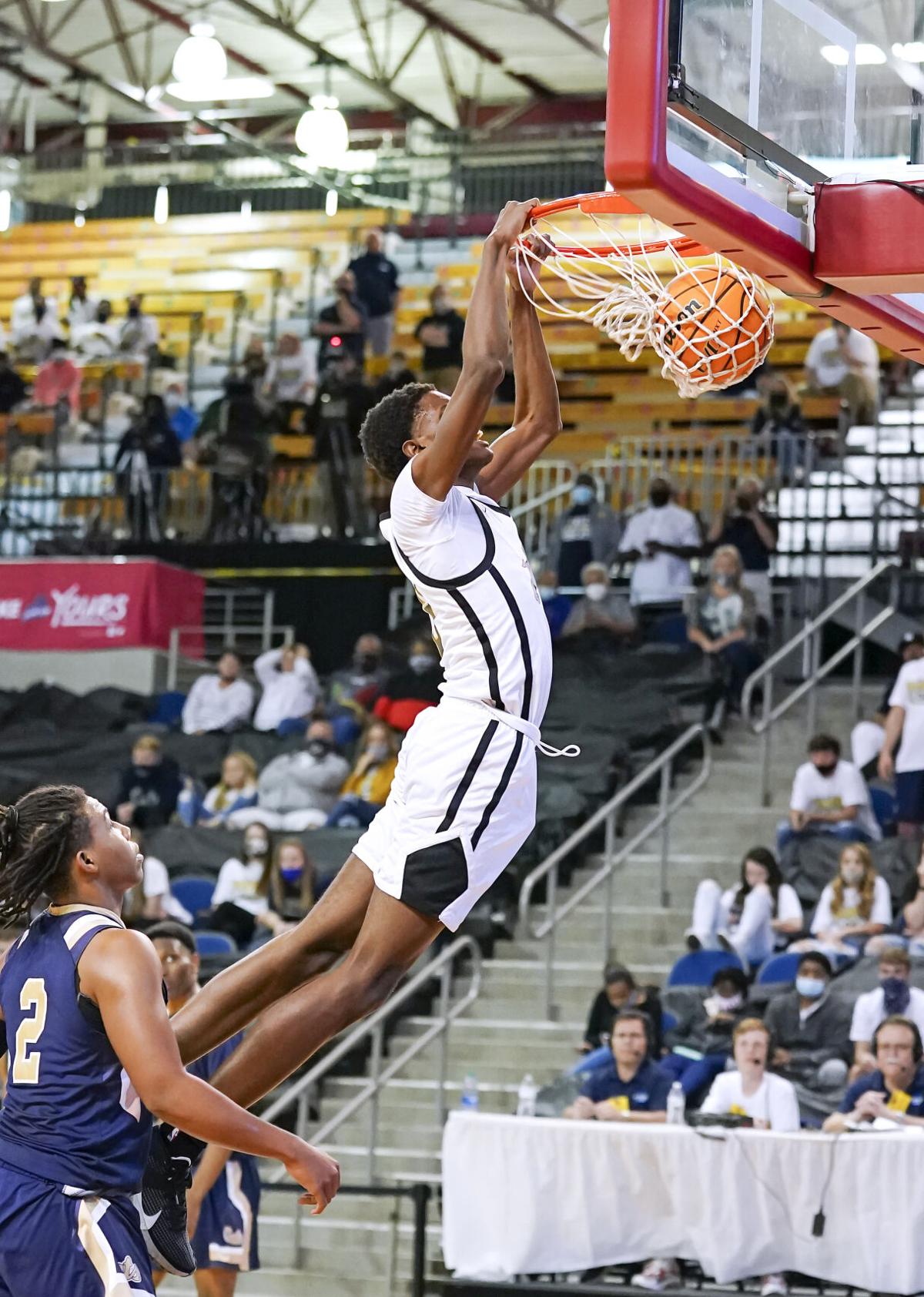 GRANITEVILLE, S.C. — Perhaps what LaTroy Brace said three seasons ago, in 2018, was a simple message of encouragement, to keep his young players’ eyes on the broader picture while rebuilding a program that had reached a lower-state final two years earlier.

He told his freshmen that by the time they graduated, they would play for a state championship.

The pieces were there, back then, but not yet primed to live up to their potential. Through occasional triumphs and devastating heartbreaks, what didn’t break Brace’s Bulldogs made them stronger.

Now, one season after losing one of those heartbreakers that kept Marlboro from reaching a lower-state final in 2020, Marlboro was determined not to let that happen again. This year, after willing their way to win three excruciatingly close playoff games, Brace’s words in 2018 to his Bulldogs proved prophetic as they won the SCHSL Class 3A state championship with a 71-60 win against Seneca on Thursday at the USC Aiken Convocation Center.

It’s the program’s first state crown since 2001, in 4A, when it was coached by Ken Spencer.

“I remember that talk,” Marlboro senior DeVonta Oliver said. “Us players trusted him, and he trusted us. We knew one day we could come out as state champs. To have done it, words can’t explain this.”

Oliver, whose tip-in at the buzzer in the lower-state final actually gave Marlboro the chance to play for Thursday’s state championship, had one of the biggest games of his career with 16 points, 12 rebounds and eight assists. Just as Oliver won Saturday’s game over Orangeburg-Wilkinson with the tip-in, he scored on three tip-ins on Thursday’s game alone. And on top of that, he added two dunks — the first with one hand, and the final one with two.

With Oliver and Scott, the Region 6-3A player of the year, at the peak of their game against Seneca, the Bulldogs started to roar ahead near the end of the first quarter.

Leading 12-11 , Marlboro began to establish its dominance, as teammate Tyler Thomas sank a 3-pointer at the buzzer. After the Bulldogs had the second quarter’s opening possession, a Johnson putback extended Marlboro’s lead to 17-11.

Marlboro’s lead reached double figures for the first time Thursday on a Thomas layup that made it 21-11.

“It was defense, that was our whole goal, to slow them down and make plays, one possession at a time,” said Brace, whose Bulldogs outscored Seneca 60-28 in the paint. “We knew they wanted to play fast, and we knew who their shooters are. So we wanted to execute on offense when we had the ball.”

Seneca made a brief run early in the third quarter, rallying within 41-38, but the Bulldogs re-established themselves and dominated from there.

“After they would score, we would often get big inbounds passes from DeVonta,” Brace said. “(Seneca) wouldn’t get back on assignment, and we would score right back.”

A Johnson jumper capped a Marlboro surge that gave the Bulldogs a 62-53 lead with 5:56 left in the game. And, a Thomas jumper with 4:24 left gave Marlboro a double-digit lead once again at 64-53.

Seneca never recovered. For the first time this postseason, the Bulldogs wouldn’t have to sweat a game out that hanged in the balance.

“It showed how we progressed and grew up like a team,” Scott said. “Those close games taught us to stay determined and never give up through the whole game.”

And now, this game is over, and Marlboro County’s players and coaches will soon fit themselves for championship rings.

Brace called this, but he also credits a higher power for his program’s rise.

“It’s amazing,” said Brace, whose team ends the season 11-2. “Put God first, and anything can happen. I’m so happy and excited for this program, this is an unreal feeling. But God is in control of all of it, and it was meant for us to be here.”

Marlboro County’s DeVonta Oliver is lifted by teammates as they celebrate their SCHSL Class 3A state championship victory over Seneca on Thursday in the USC Aiken Convocation Center.