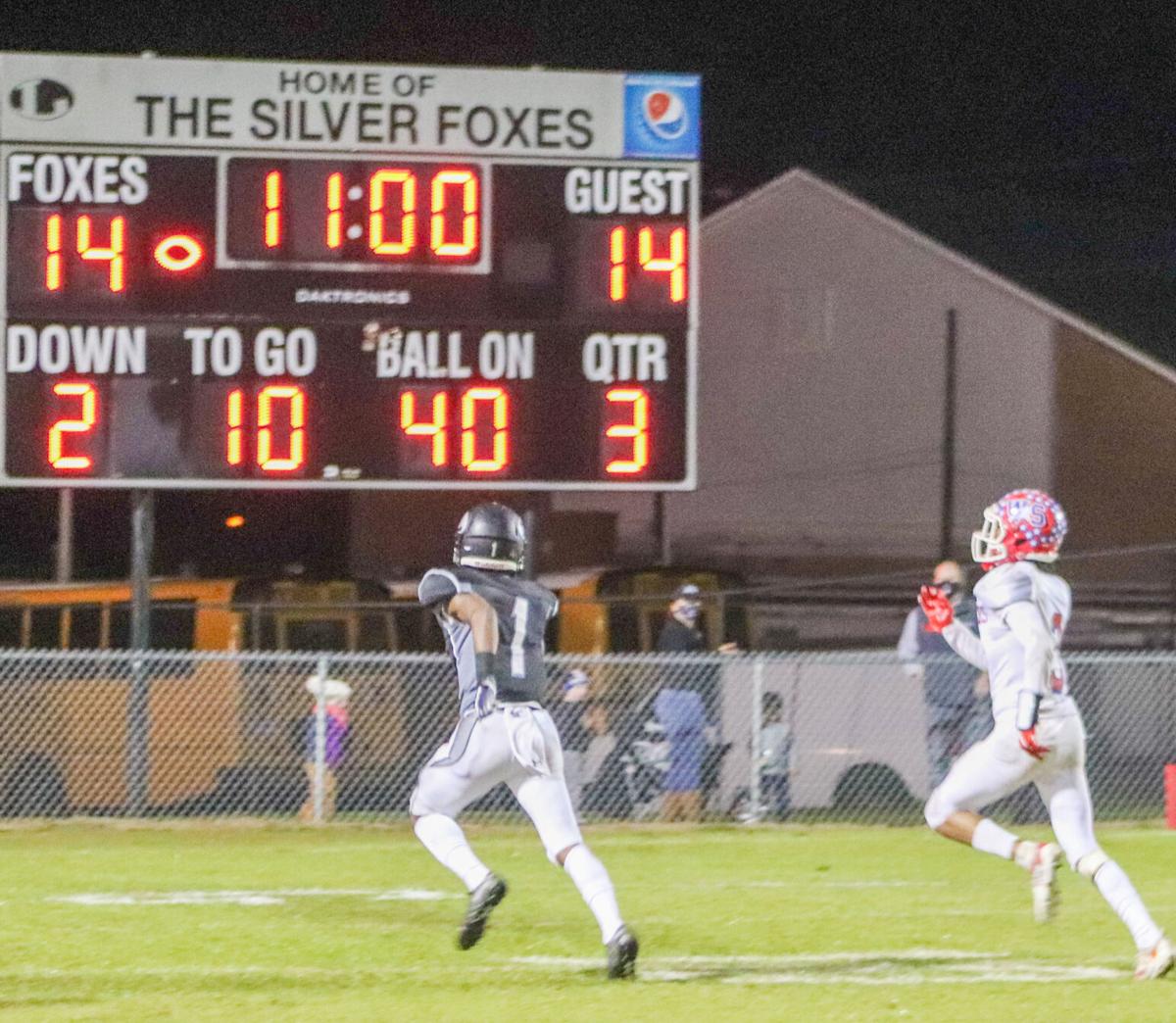 Lamar's Derrick Higgins breaks away and scores on a 60-yard touchdown pass from Tyler McManus to give the Silver Foxes a 22-14 lead early in the third quarter. It was a lead they would not relinquish. 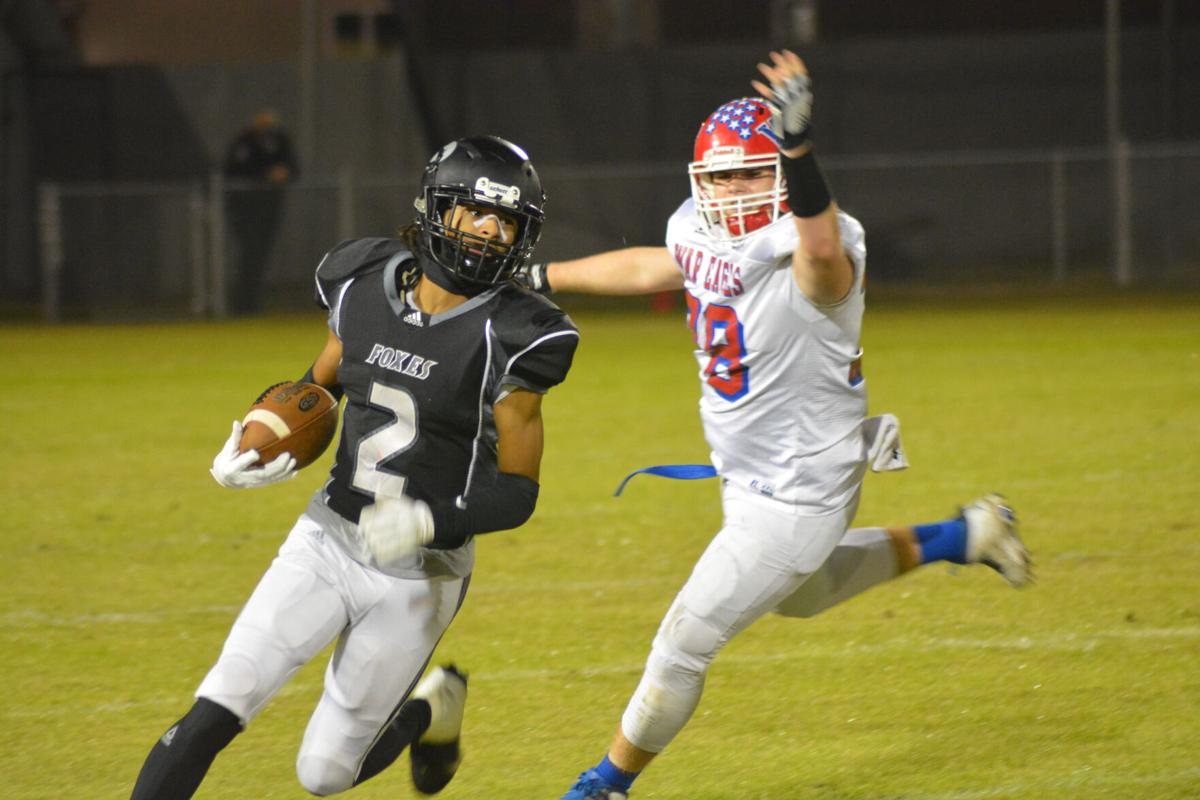 Lamar's Patrick Anderson looks for open field while a Wagener-Salley defender is in pursuit. 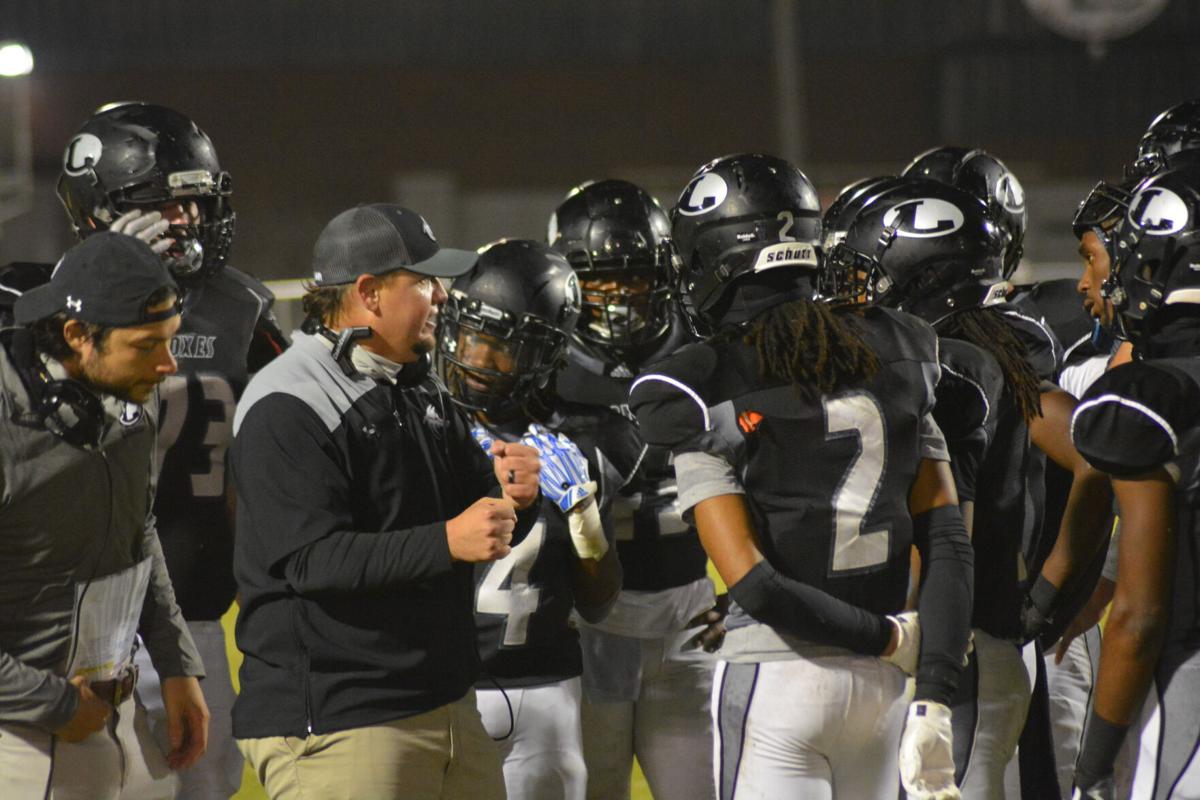 Coach Chad Wilkes’ team started the third quarter with 16 unanswered points and pulled away for a 52-28 home victory to reach the program’s sixth upper-state final in the past seven years. This year’s upper-state final will be at 7:30 p.m. Friday at Southside Christian. After falling short in last year’s upper-state semifinals against Wagener-Salley for the first time since 2012 (a loss to Ware Shoals), Wilkes wanted nothing more than revenge for last year's playoff loss.

“It means a lot. We knew when the brackets came out that this was kind of how it was going to shape up,” said Wilkes, Lamar’s second-year coach. “I was even cheering for (Wagener-Salley) last week, and they’re a good team, and it was a good test. But I’ll take my guys against anybody. I felt like we should have had them last year. We got some good revenge on them, and I’m happy for the players to get that feeling.”

Derrick Higgins scored on a 60-yard pass from Tyler McManus, and T.J. Dolford scored on an 18-yard run to give Lamar a 30-14 lead before the third quarter was halfway done.

“That was huge,” Wilkes said. “High School football, as much as us football coaches want to control it and write everything up on the chalkboard and do everything else, it’s a momentum game. Kids are emotional, coaches are emotional. Momentum matters. When you grab that momentum early, it’s natural to kind of dip your head. And we saw that. It happened to us last year against them.”

Lamar’s second-half surge, however, has been the trend this season.

“I told them at halftime we’ve been a second-half team all year. I don’t want to be a second-half team, I want us to be a whole-game team,” Wilkes said. “And then I told them what we had to do. I told them we were going to go down the field and score. I knew we could score with anybody. We were then going to get a three-and-out (it was actually a failed fourth-down conversion). And then, we’re going to score again, and we’re going to control the game from there. And that’s pretty much exactly what happened. I’m proud of them.

“But we’re going to have to play better in the first half next week, for sure.”

Dolford had a lot to do with that as he scored three of his four touchdowns after halftime and finished with 230 yards total offense (100 receiving on two catches). He even recovered a fumble by game’s end.

“He plays everything He does kick returns, he plays defense. We used him at the end of the game as a quarterback spy,” Wilkes said. “He plays running back and receiver. He does it all, and he’s a smaller guy, but he’s tough as nails. He doesn’t come off the field, no matter who he’s getting hit by. He could be getting hit by the biggest dude in the world, he don’t care. He just keeps getting up and keeps running.”

McManus also had an impressive night with 212 yards on 5-of-10 passing and three touchdowns. The other TD pass was Lamar’s first – to Higgins, which helped Lamar earn an 8-6 lead in the first quarter.

Wagener-Salley, on its ensuing drive, converted a fourth-down play, and then two on third down before Chandler completed a 9-yard touchdown pass to Antonio Swedenburg (followed by a Chandler two-point run) to give the War Eagles a 14-8 lead.

But Lamar was not done with its big plays before halftime. McManus completed a long pass to Dolford around the 20, and he scrambled past defenders before scoring on a 52-yard play to tie the score at 14-14.

Just as it seemed Wagener-Salley would strike back before halftime, facing fourth-and-goal from the Lamar 6, the Silver Fox defense stopped Swedenburg at the 1. Perhaps as a sign to come of Lamar’s force, McManus burst up the middle on the next play for a 25-yard gain.

But the ultimate sign of a successful season is still concentrating on football this coming week.

Lamar's Derrick Higgins breaks away and scores on a 60-yard touchdown pass from Tyler McManus to give the Silver Foxes a 22-14 lead early in the third quarter. It was a lead they would not relinquish.

Lamar's Patrick Anderson looks for open field while a Wagener-Salley defender is in pursuit.