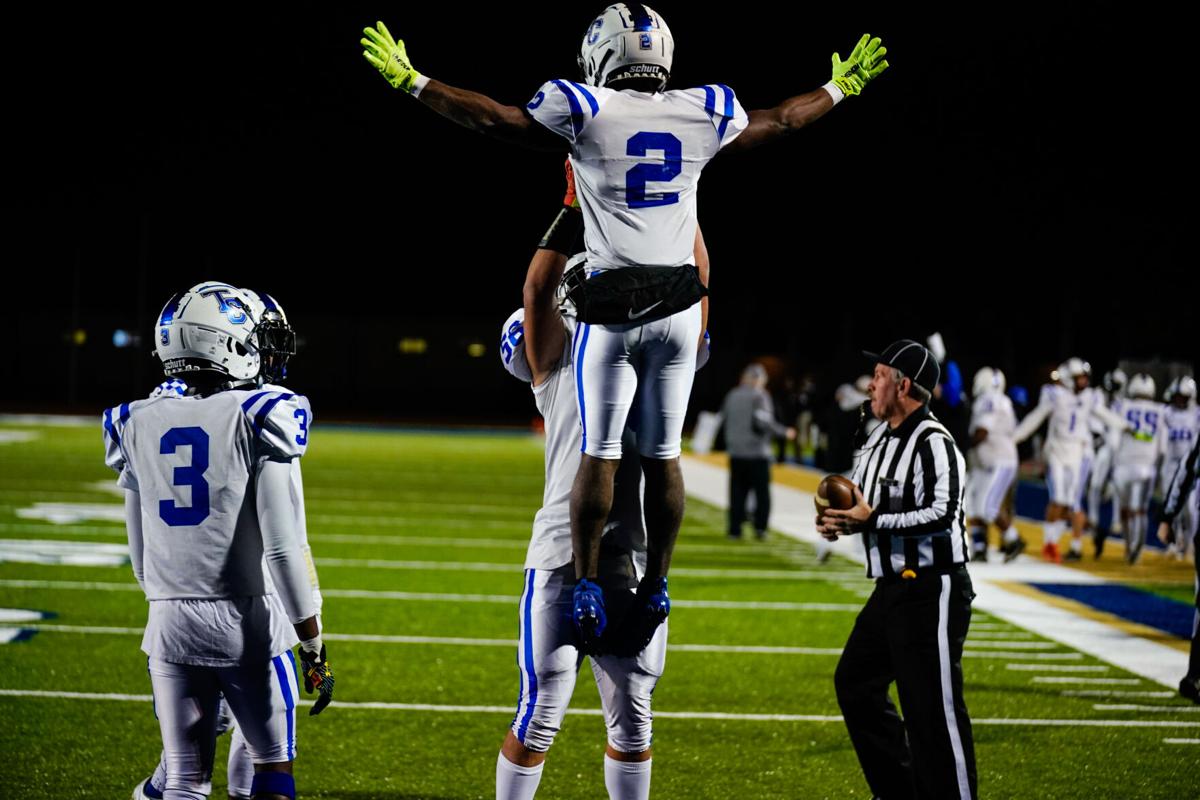 A teammate celebrates with Trinity Collegiate’s Reggion Bennett after Bennett scored on a TD pass from Carter Hardee. 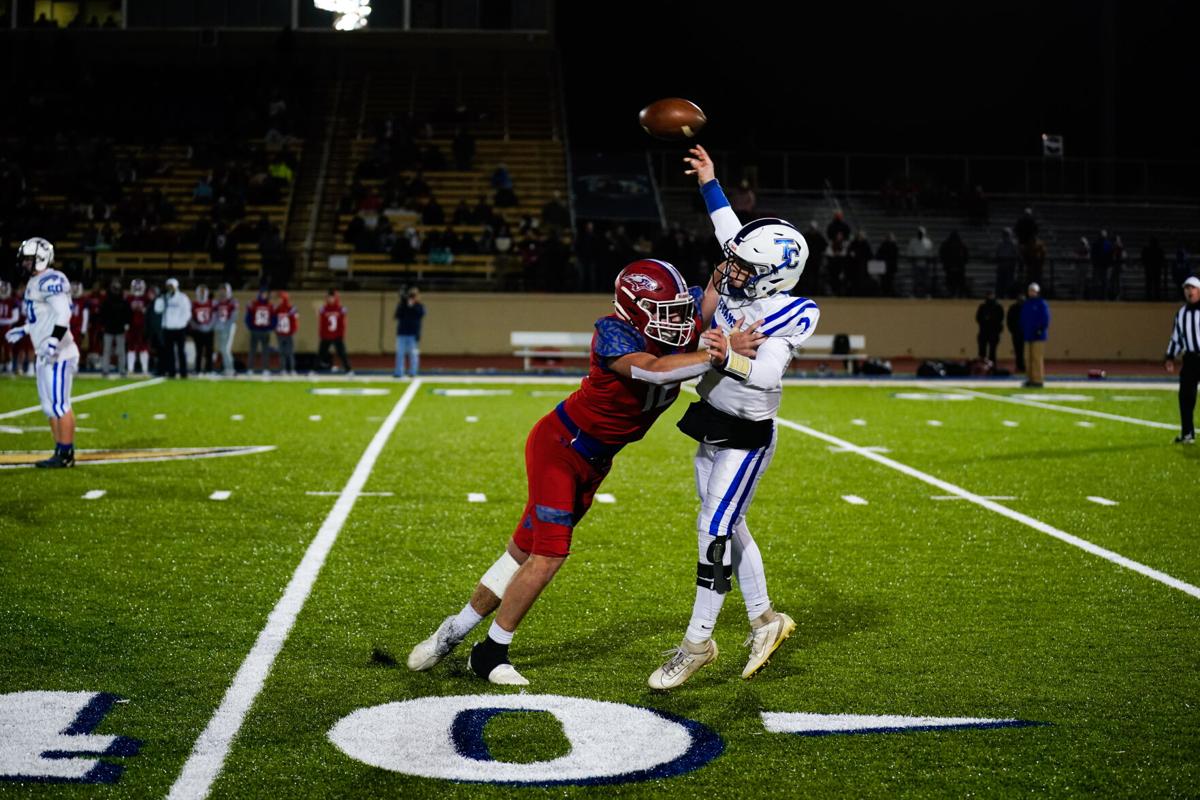 Trinity Collegiate quarterback Carter Hardee is pressured by a Hammond defender while attempting to pass the ball. 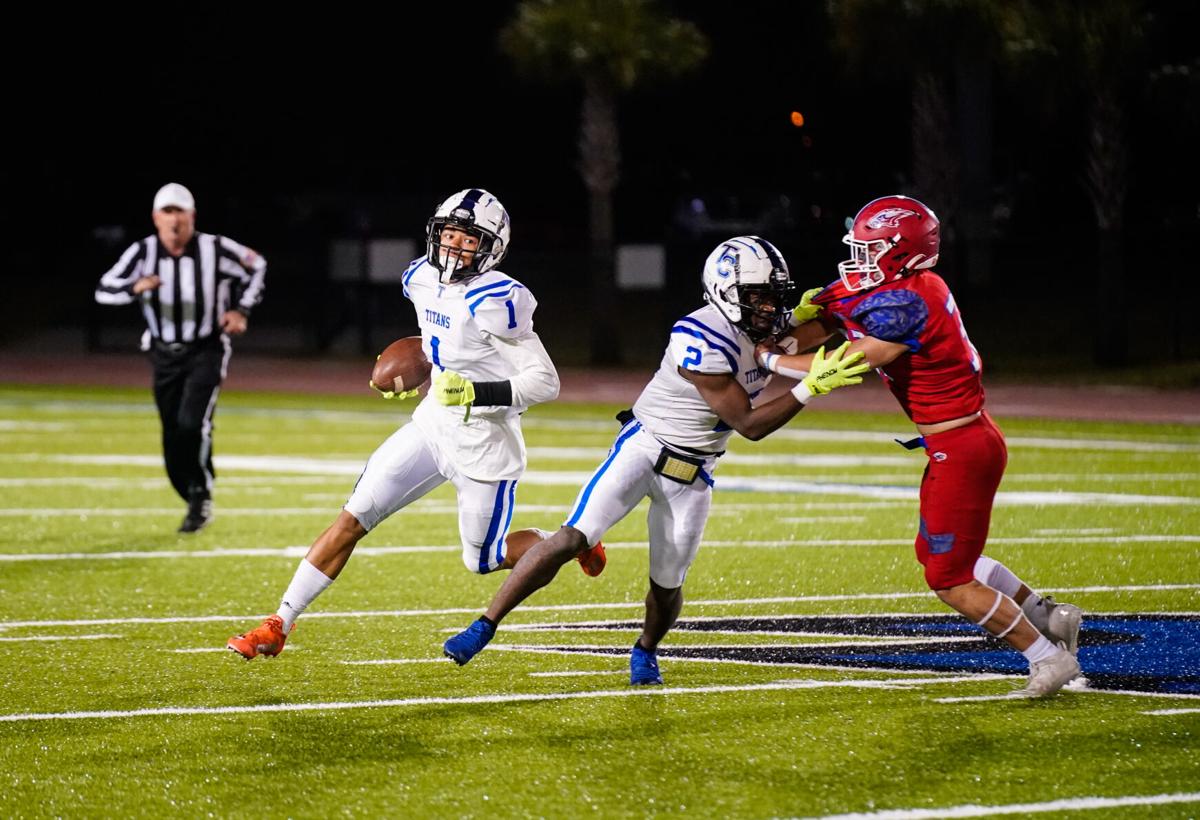 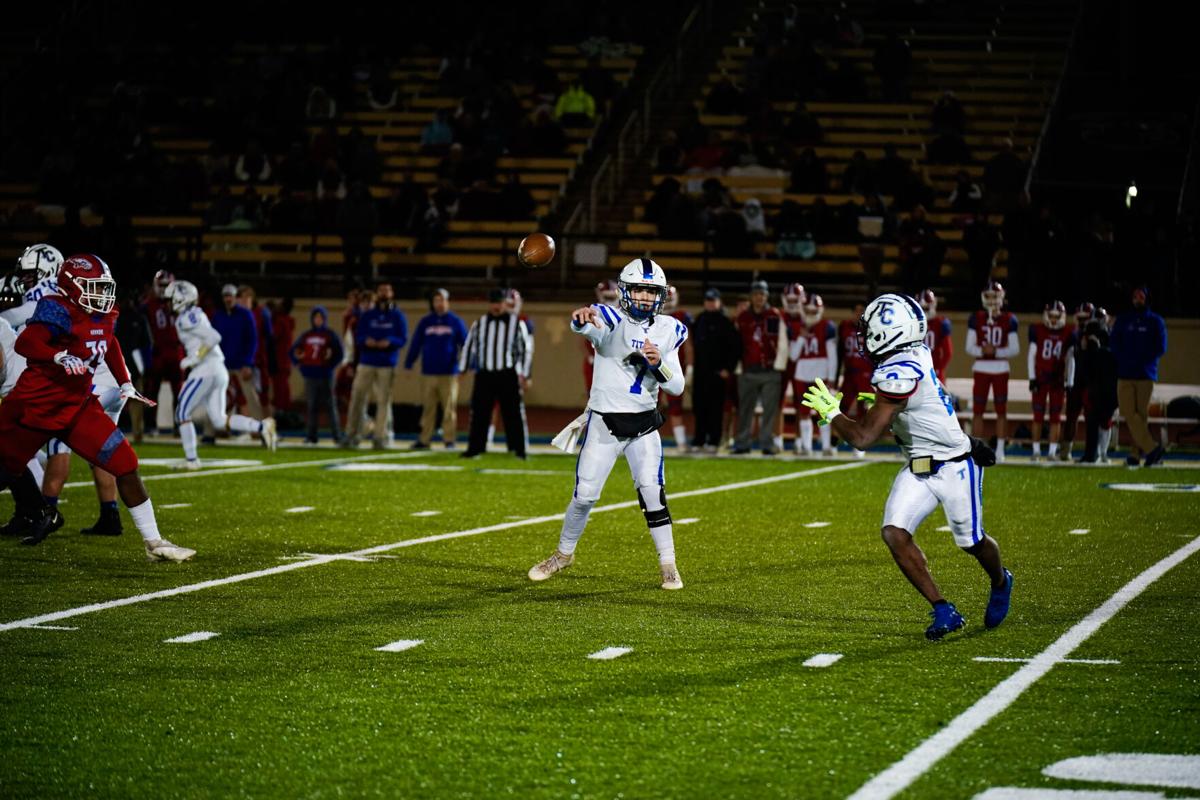 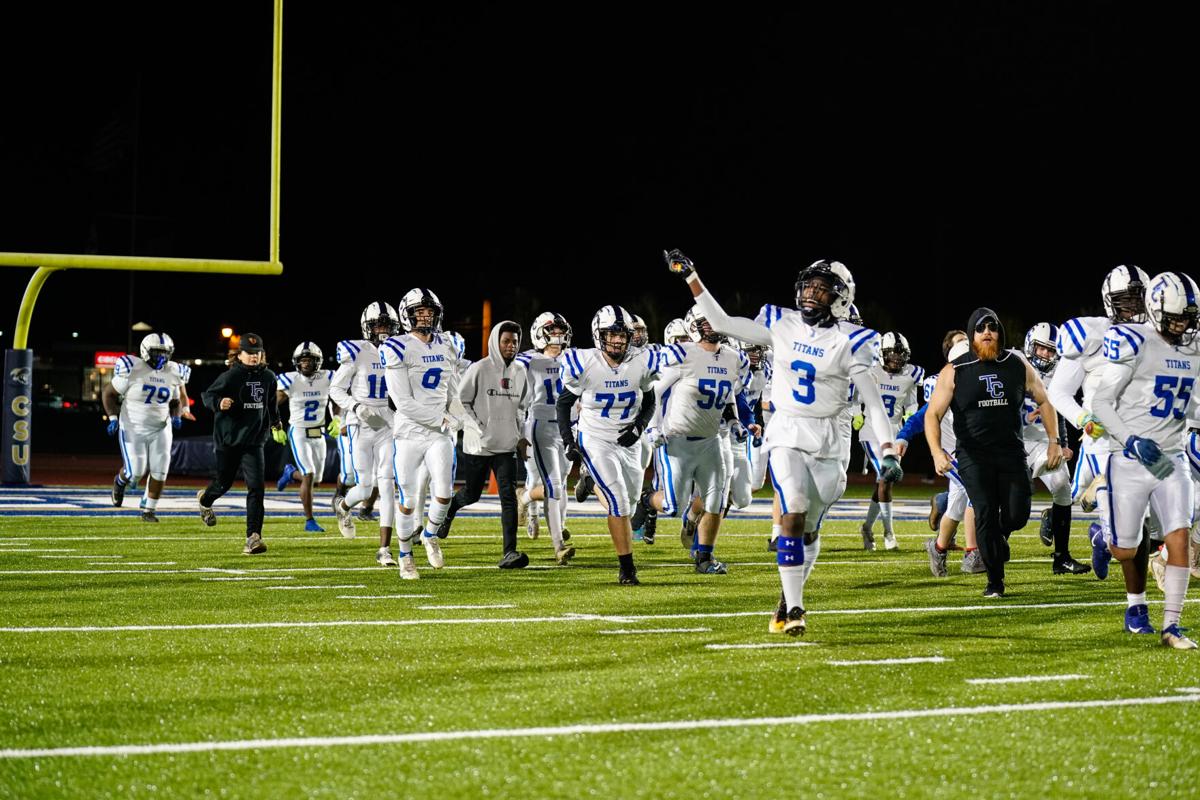 "That second quarter, we were kind of hanging on, you could feel we were hanging on," Amell said.

The Skyhawks then broke away for good, scoring 34 unanswered points and winning 48-15 to capture their fifth state championship in a row at Charleston Southern University's Buccaneer Stadium.

Trinity Collegiate finishes the season at 11-2 in their second year since moving up from 2A. Sure, the Titans will hang a banner to commemorate this year's accomplishment. But Amell wants his program to experience that same feeling it had in its final 2A game: Hoisting a state championship trophy.

"We'll keep building and regroup and hopefully be back next year," Amell said.

Hammond quarterback Dylan Richardson made sure the Titans would not experience a state championship this year, passing for 285 yards Friday and accounting for six of the Skyhawks' seven touchdowns (three through the air).

Richardson's receivers were even more spectacular, making catches while diving or being heavily defended.

Trinity Collegiate, which planned to use long drives to limit Hammond's possession time, worked that to perfection when it first got the ball. The Titans drove 80 yards, using almost half the first quarter and scored on quarterback Carter Hardee's 1-yard sneak. Tre McLeod, who caught a 27-yard pass that set up Hardee's score, ran in the two-point conversion for an 8-0 lead.

But by first quarter's end, McLeod, a Furman commit, injured his hamstring.

"When Tre got hurt, that changed the plans," Amell said. "We had planned to put him at quarterback a lot and mix things up (McLeod attempted one incomplete shovel pass). But after he went down, that went out the drain."

After Hammond took a 14-8 advantage, Hardee stepped up as the Titans had to resort to more shotgun and spread formations. He finished with 127 yards, including a 13-yard catch-and-run to Reggion Bennett that resulted in their final touchdown. During that drive, Hardee completed several key, third-down completions to keep it alive.

"I'm pleased because (passing) is something we don't ask him to do a whole lot," Amell said. "Obviously, going into next year without Tre and Reggion, he'll have to do a lot more of that. So, it was good to see him do that in live action."

"Our defense did a great job against the run 90 percent of the night," Amell said. "But too many long passes hurt us. At halftime, we asked the kids to dig down, this was the fight of their life.

Unfortunately, we just came up short."

Players and volunteers get ready for Arab Cup

Players and volunteers get ready for Arab Cup

Dillon RB Nemo Squire a star on, off field

DILLON, S.C. – Nemo Squire runs that much faster, pushes that much harder. It’s not just about effort; it’s a celebration the Dillon High Scho…

FLORENCE, S.C. — The City of Florence will bring all its existing youth baseball leagues under Little League Baseball, beginning in January. P…

LAMAR, S.C. — Ethan Hunt is a motor that won’t quit, regardless of where he plays.

A teammate celebrates with Trinity Collegiate’s Reggion Bennett after Bennett scored on a TD pass from Carter Hardee.

Trinity Collegiate quarterback Carter Hardee is pressured by a Hammond defender while attempting to pass the ball.