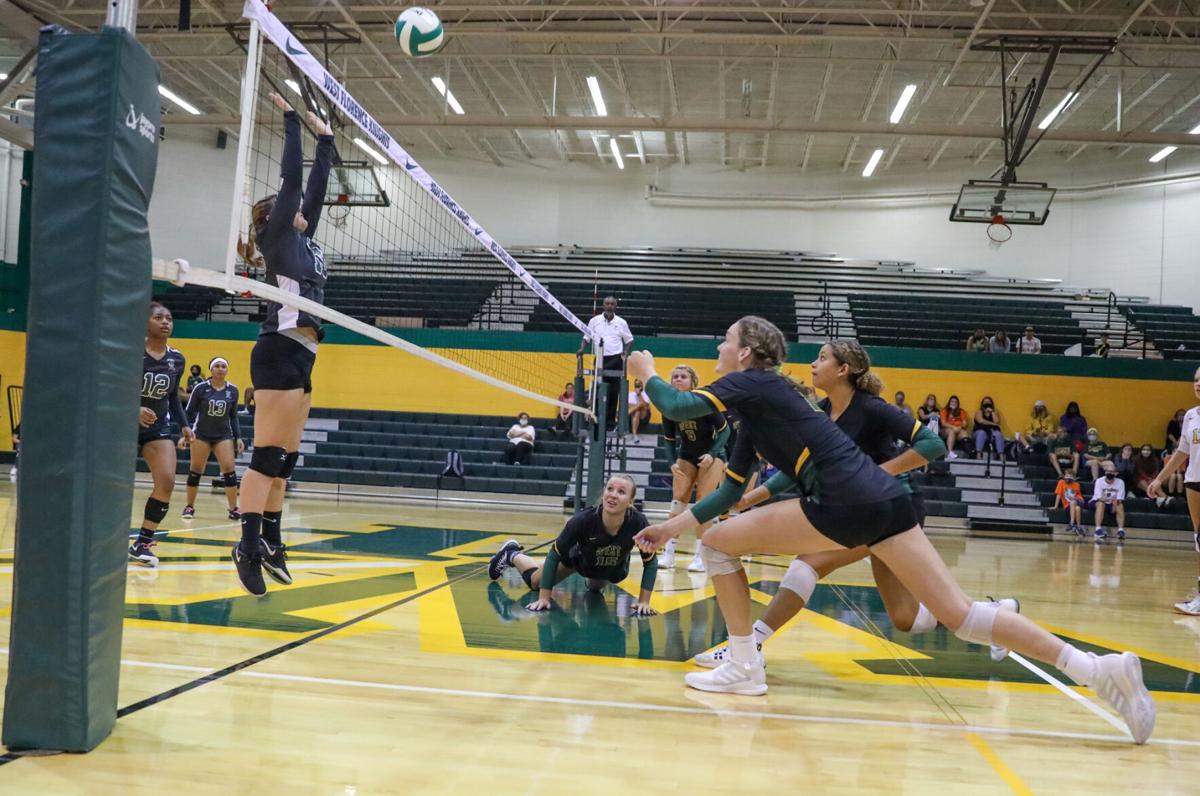 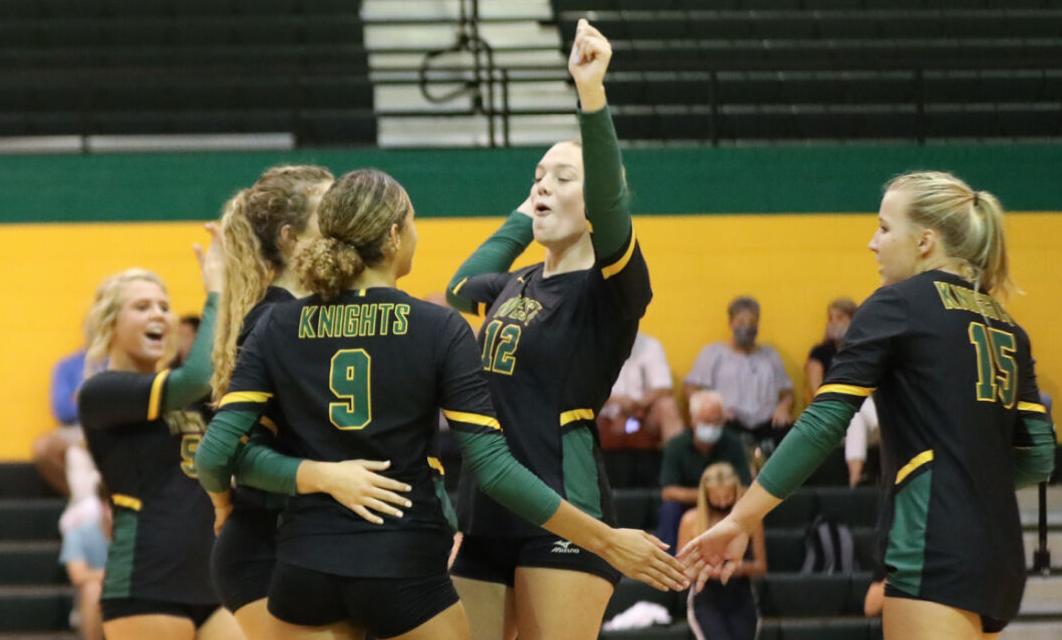 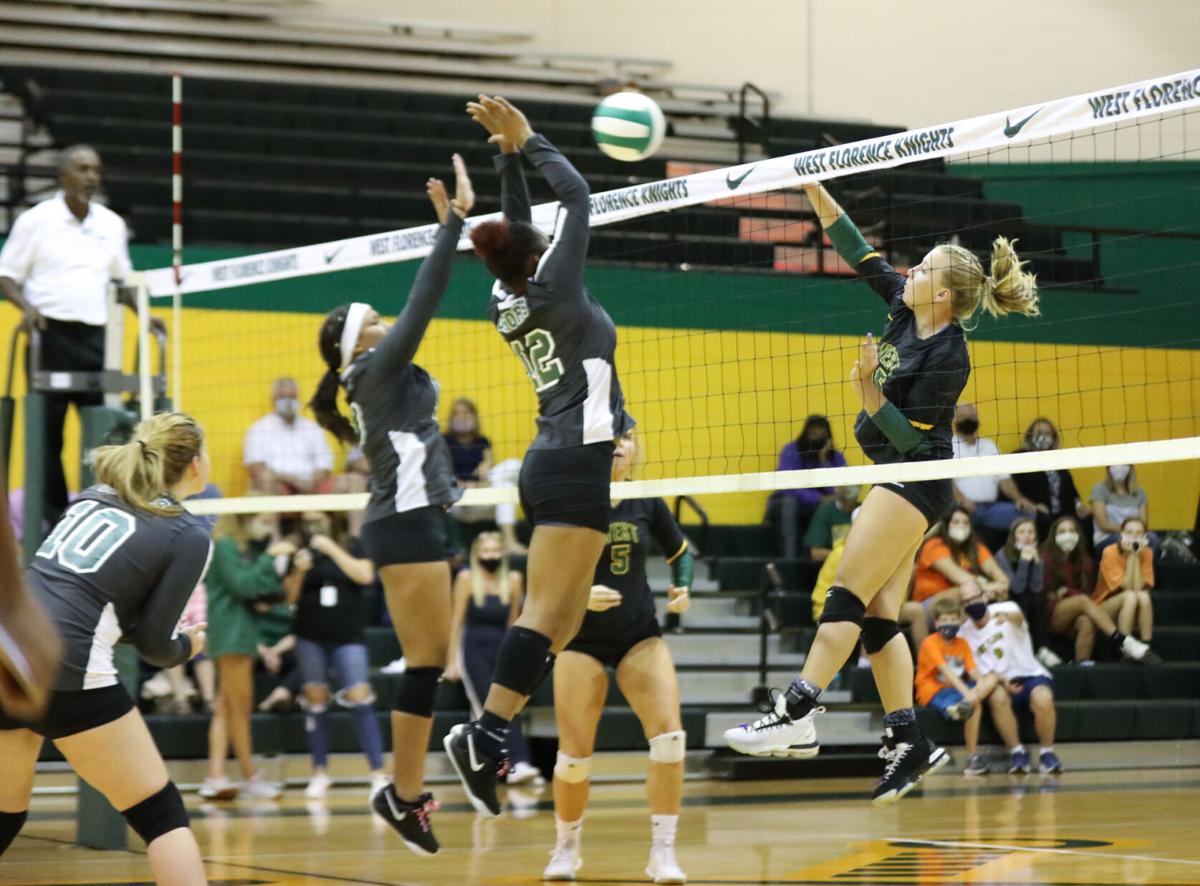 West Florence's Annalia Cook (15) hits the ball over the net Friday against Lakewood.

FLORENCE, S.C. — West Florence blitzed to a convincing first-game win against Lakewood on Friday in the Knights' home opener.

Although his Knights had a tougher time closing the next two games, it was still a sweep for coach Warren Coker’s team with scores of 25-10, 25-17 and 25-16.

Coker, however, noticed a difference in his team’s intensity between the first and the next two games.

“They fought through some times where they were just very flat,” Coker said. “But Lakewood was scrappy and was throwing balls back over that were three-balls, and we were used to playing more down balls. But give credit to them, they kept the ball alive. I don’t think we didn’t have our best night passing tonight. But at times, they came through with some big passes, too.”

West Florence, however, did not appear to have any problem with the Gators in Game 1.

“To me, we let our guard down a little bit after that first game and didn’t play with the same urgency or tenacity that we had in the first set,” Coker said.

Knowing his team’s next match is Wednesday at two-time defending state champion North Myrtle Beach, Coker wants his Knights to focus on the little things.

“I think we need to clean up our serve-receive and put together a complete game so we can be competitive in this region that we’re in,” Coker said.

After holding off Lakewood in the second game, things then got interesting in the third game when the score was tied at 14-14.

“I never feel like we were out of anything, but I felt like we were the stronger team, and we should have been more up in all of the games tonight,” Coker said. “But like I said, Lakewood kept throwing the ball and digging it up and getting it back to us, making us play the extra ball, and sometimes we were making the mistakes instead of them.”

Then, with Jordyn Perry on serve, the Knights won five more consecutive points and led 23-15. It was just a matter of time before Rollins closed the match out with one of her kills.

But even Owens had a similar postgame view to Coker’s.

“I just think that the team that we played wasn’t as tough as the competition we normally face. We kind of played down to them. But overall, we came out and we conquered and we finished on top,” Owens said. “We definitely didn’t do our best. But we always know there’s room for improvement, and we’re going to take this game as a lesson and be ready to move on to what’s next.”

West Florence's Annalia Cook (15) hits the ball over the net Friday against Lakewood.