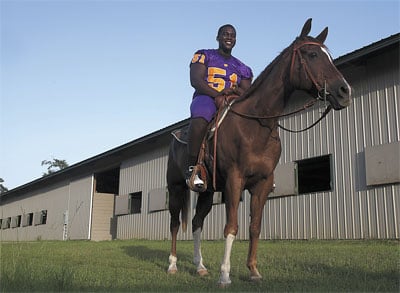 Wilson tiger Justin Evans  poses for a photo on Pokey, one of the pleasure horses belonging to Palmetto Arabian farm manager Melissa Johnson Bradshaw. Evans is one of the top offensive lineman in the state and is getting looks by several Division I schools. 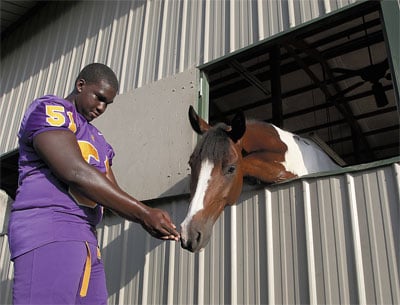 Wilson's Justin Evans plays with the horse Splash Dance Kid MG at the Palmetto Arabian farm in Timmonsville. Evans is one of the top offensive lineman in state.

Justin Evans says he always wanted to play quarterback, but his body had other ideas.

At 6-foot-6, 295 pounds, the Wilson senior’s frame isn’t too suited to being the team’s signal caller, so instead, Evans has been a force on the Tigers’ offensive line for the last three years.

Evans has emerged as not only one of the top tackles in the area, but also the state. The recruiting web service 247sports.com has Evans listed as the third-best offensive tackle prospect South Carolina and 23rd overall prospect for this year’s class. He has offers from Tennessee, East Carolina, Virginia Tech and S.C. State.

Evans spent a week at Virginia Tech’s camp this summer in July, but doesn’t have a favorite at this point.

“I am just neutral right now,” Evans said of his college choices. “I am just worried about going out there and having a strong season and giving it my best.”

Evans admits he actually didn’t want to play football at first and only went out after his mother urged him to when he was in the third grade. But once he got out on the field, he changed his mind.

“I didn’t really know the reason why I didn’t want to play. I guess I was a bit of a mama’s boy,” Evans said. “But I love the contact and the things that come with playing the game.”

And Evans remembers being in the stands at Williams-Brice Stadium in 2007, watching the Tigers win the Class 3A championship. He would love to help get them back there. Wilson hasn’t won a playoff game since that year.

Eaddy, the first-year Wilson coach, has been impressed with Evans so far and is expecting more out of him this year, not only with his play but as a leader. Eaddy brought Evans and the rest of the seniors in for a leadership retreat this year.

Former Wilson players spoke to the seniors on what it takes to become a leader in the locker room.

“Sometimes kids don’t really understand what it means to be a leader,” Eaddy said. “But you see a light bulb coming on for Justin and he is speaking a little bit more. When he speaks, it means a lot.”

As far as on the field, Eaddy has been preaching consistency to Evans, whom the coach says will mix in one bad play for every five or six good ones. But Eaddy said Evans’ consistency has gotten better, and that was on display against Sumter in the team’s first scrimmage.

Evans was beaten by a smaller defensive end early in the game but that was about the only time it happened that night.

“We have been stressing making adjustments and being a coach out there on the field,” Eaddy said. “Justin made his adjustments, got his kick-step back and the kid couldn’t get by him the rest of the evening.

“We want him to work hard and whatever program he ends up to continue to work hard and maybe one day add him to the shrine we are building in front of the school with the other NFL players who have played here.”

What sports are most affected by weather?

Olympian Tom Daley knits while watching in the stands in Tokyo

Olympian Tom Daley knits while watching in the stands in Tokyo

FLORENCE, S.C. — Former West Florence star pitcher Akeem Bostick, has been called up to join the New York Mets for their game tonight against …

COLUMBIA, S.C. — Florence Post 1 scored five runs in the bottom of the sixth, rallying past Fort Mill for a 10-6 victory and the program’s fir…

COLUMBIA, S.C. — Florence is on its biggest stage this season, playing in the main draw of the American Legion state tournament. On Friday, Po…

Simone Biles says she withdrew from final to protect team, self; plus more from Tokyo

Simone Biles says she withdrew from the Olympics gymnastics team final because she wasn't in the right headspace to compete. Here's the latest.

SUMTER, S.C. — The momentum shift was drastic and it was almost instantaneous.

FLORENCE, S.C. – Wilson High School is turning to a familiar face to guide its baseball program.

With Simone Biles out, Russians win gymnastics gold over US

The Russian Olympic Committee has won the gold medal in women’s gymnastics after U.S. star Simone Biles exited with a medical issue.

Wilson tiger Justin Evans  poses for a photo on Pokey, one of the pleasure horses belonging to Palmetto Arabian farm manager Melissa Johnson Bradshaw. Evans is one of the top offensive lineman in the state and is getting looks by several Division I schools.

Wilson's Justin Evans plays with the horse Splash Dance Kid MG at the Palmetto Arabian farm in Timmonsville. Evans is one of the top offensive lineman in state.