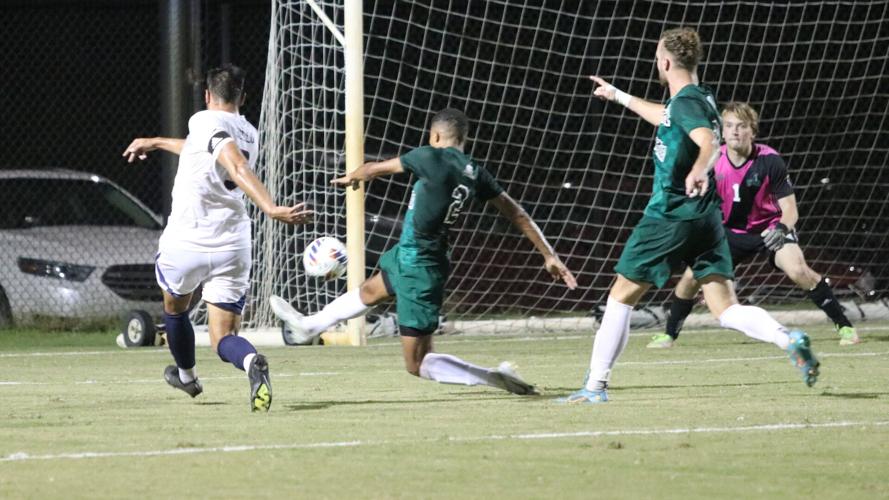 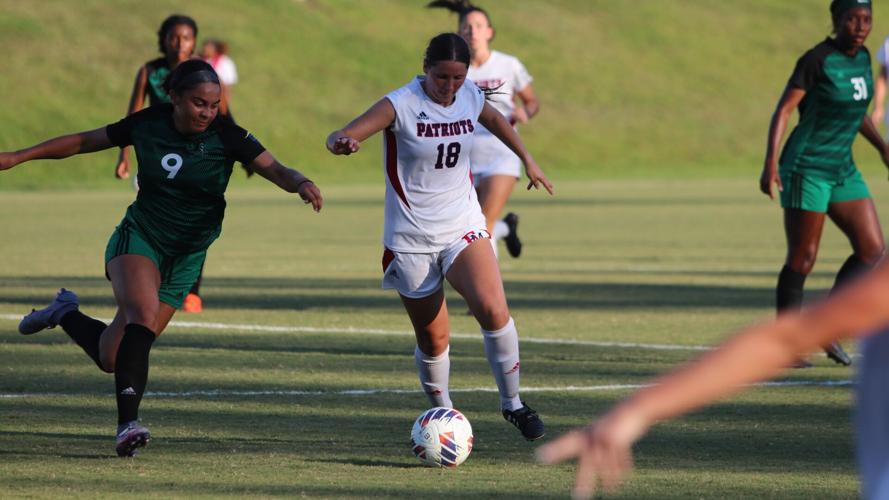 The Patriots outshot Mount Olive 13-5 and managed a 7-5 edge in corner kicks. However, the FMU defense did not allow a shot on goal allowing goalkeeper Andrea Scapolo to record his third shutout of the season without having to make a save.

Francis Marion held UMO without a shot for the opening 37 minutes while building a 1-0 advantage at halftime. The opening score, originally called an own goal, was credited to forward Nick Huenig after a post-game review. Bello sent a hard service into the 6-yard box from the left side and Huenig redirected it into the goal after sliding in front of Engren at the 20:49 mark.

Huenig has chances to add to the lead, but a 27th-minute header sailed outside the right post and his turn-and-shoot effort from the top of the box in the 35th minute was snagged by Engren. Bello forced a great save by Engren at 40:48 with a hard shot from 12 yards out.

Bello did double the margin to 2-0 just 3:13 into the second half. Midfielder Hugo Jonsson played a through ball to Bello who dribbled twice and chipped a 10-yard shot over a hard-charging Engren.

Bello assisted on the final tally as he laid the ball off to Jose Curvelo in the right side of the penalty area and he buried a 15-yard shot in to the left-side netting of the goal.

The FMU score was delivered by defender Courtney DeNoux from outside the 20-yard box that was ultimately finished off by a looping Brosnihan header over the keeper’s outstretched arm. The goal came at the 1:29 mark.

Patriots to compete at ITA

FLORENCE – Members of the Francis Marion University men’s and women’s tennis teams have been selected to participate in the ITA Southeast Regional Tennis Tournament, Friday through Monday at the Palmetto Tennis Center in Sumter.

In men’s action, junior Liam Day and sophomores Harri Lloyd-Evans and Martin Barbera will compete in singles play, while two FMU doubles teams will participate: Day and junior Leonel Gonzalez and the duo of Lloyd-Evans and Barbera.

In Friday’s singles draw, Lloyd-Evans will face Cedric Holzmann of Flagler College at 9:30 a.m. and Barbera will face Edis Nokic of Wingate University at 10 a.m. Day earned a first-round bye and will play his first match on Friday at 3 p.m.

In Friday’s doubles draw, Lloyd-Evans and Barbera will play Samuel Winter and Thibeault Decaluwe of Coker University at 8 a.m., while Day and Gonzalez will play Julian Kenzlers and Juan Sengariz of Anderson University also at 8 a.m.

In women’s singles, FMU senior Gabriel Karatantcheva and freshman Chelsea Seidewitz will compete. The doubles team of junior Julie Martincova and sophomore Kim Venghaus will participate in the 32-team draw.

In Friday’s doubles draw, Martincova and Venghaus will battle Sofia Shing and Chiara Santoro of Georgia College & State University at 8 a.m., while in Friday’s singles action, Seidewitz will face Lisa Voloshyna of the University of Mount Olive at 11:30 a.m. and Karatantcheva will play Katie Robeson of Anderson at 1 p.m.

Winners at the regional advance to the ITA Cup to be held later this fall in Rome, Ga.

FLORENCE – The Francis Marion University women’s volleyball team will host a pair of Conference Carolinas matches this weekend, while the Patriot men’s and women’s soccer teams will entertain North Greenville University for a doubleheader.

The soccer twinbill will begin with the women’s match on Saturday at 4:30 p.m., followed by the men’s contest at 7 p.m.

Admission to the Griffin Athletic Complex for the soccer matches is $8 for adults and $5 for students with FMU students being admitted free with identification.

FLORENCE, S.C. — Immersed in a sea of green and gold, West Florence’s Darren Lloyd needed a minute to reflect on the magnitude of Friday’s 22-…

DILLON, S.C. – To say Kelvin Roller and Quin McCollum know each other well is something of an understatement.

PAMPLICO, S.C. – The top two running backs in the Pee Dee went head to head Friday as Hannah-Pamplico welcomed Johnsonville in a marquee 1A matchup.

South Florence climbs to top of 4A state football poll

FLORENCE, S.C. – Jody Jenerette recently told someone that this might have been one of the best bye weeks the West Florence High football team…