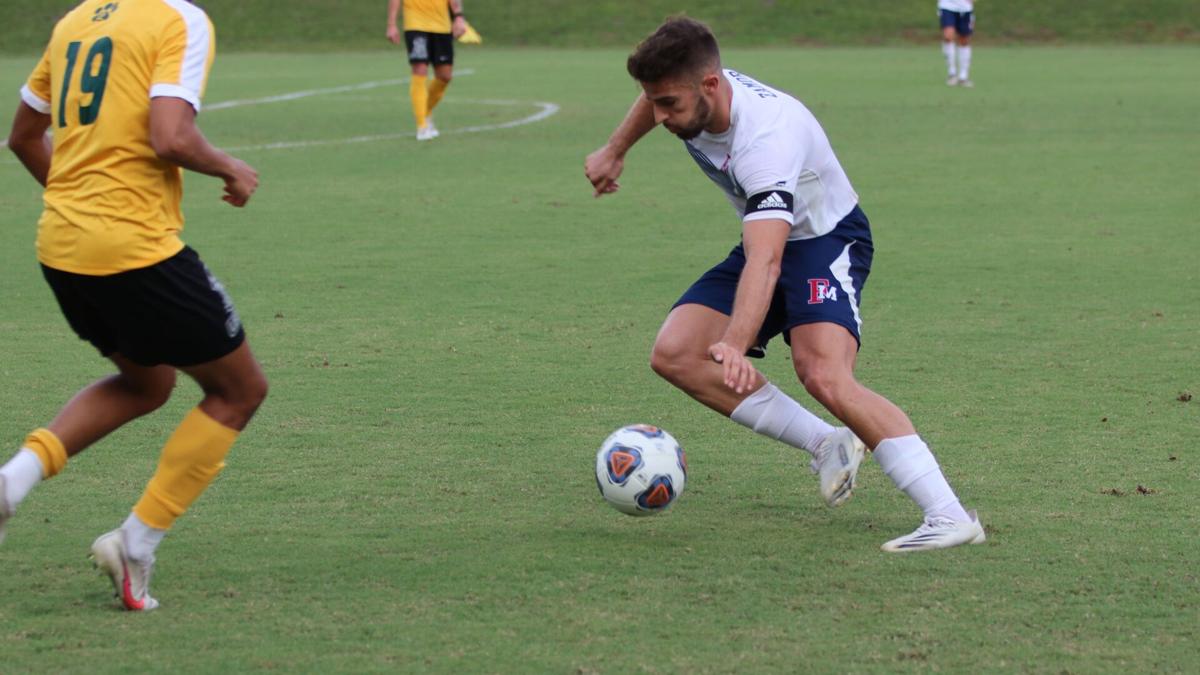 Francis Marion’s Alvaro Zamora (right) scored on a penalty kick in the 65th minute as the Patriots earned a 1-0 victory over Lees-McRae on Saturday to stay unbeaten in Conference Carolinas play. 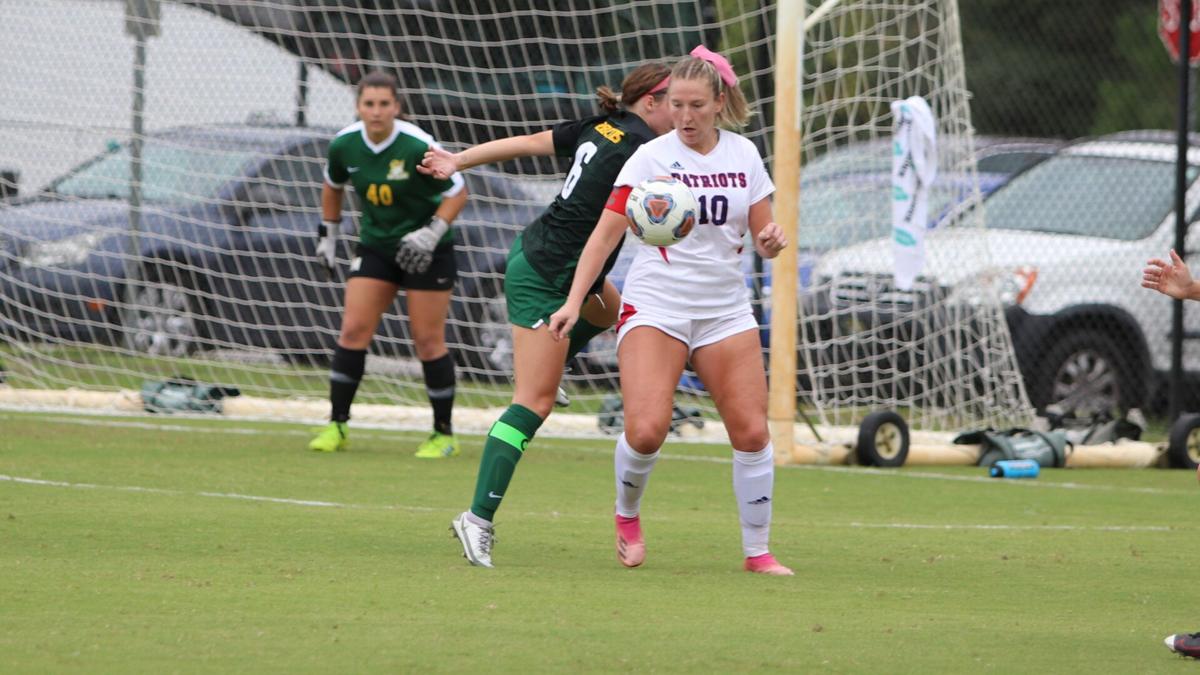 Francis Marions' Dayle McEwen (10) looks to move into scoring position during the Patriots' 2-0 loss to Lees-McRae on Saturday.

Zamora’s goal came on a penalty kick at 64:10 after a cross from junior forward Javier Bello to freshmen forward Nick Huenig in the 6-yard box was touched by the arm of a Bobcat defender. Although Lees-McRae goalkeeper Joshua Garvilla guessed the right direction, Zamora’s strong offering found the right-side netting.

The Patriots played great defense as they held Lees-McRae to only five shots, all of which were off-target. FMU totaled 15 shots with Zamora registering four, while seniors Sam Pollard, Oliver Peters, and Mauricio Castorino and junior Javier Bello each had two attempts. Graduate student defender Oier Bernaola and sophomore midfielder Matias Morales both registered a shot as well.

The Patriots compiled 13 corner kicks to the Bobcats’ one.

Sophomore goalkeeper Ricardo Rossi and the Patriots have won four matches in a row and stay undefeated alongside Mount Olive in the Conference Carolinas standings. Rossi has posted three clean sheets in the four-match winning streak, although he was not forced to make a save on Saturday.

“Even though the scoreboard may not reveal how great we played, I thought these guys played very well against a tough opponent,” said FMU coach Luis Rincon. “Coming out victorious against these in-conference teams really helps us down the line with only eight to ten games left.”

The scoreless first half featured only five combined shots. The only two on target came off the feet of Zamora and Pollard only one minute apart, but Garvilla made both stops in the 34th and 35th minutes respectively.

A good build-up in the third minute of the second stanza nearly netted the Patriots a goal. Pollard played a ball to senior Jafet Santiago who followed with a powerful cross through the 6-yard box, but Garvilla snagged it before another Patriot could take advantage. Pollard found the head of Bernaola with a well-placed corner kick at 62:25, but again Garvilla was up to the task.

Following Zamora’s game-winning tally, Lees-McRae did produce two off target shots in an attempt to tie the score, the most dangerous being a free kick from 21 yards out by Fletcher Dyson that sailed wide left in the 86th minute.

FMU womenFLORENCE, S.C. – A Francis Marion University side that included six freshmen in the starting line-up put a game effort, but Lees-McRae College scored a goal midway through each half to claim a 2-0 Conference Carolinas win on Saturday in women’s soccer action.

Francis Marion (2-9-0, 2-4-0) will host conference-leading and local rival UNC Pembroke in the latest episode of the Battle for I-95 on Wednesday at 4 p.m. on Hartzler Field.

Francis Marion and Lees-McRae each registered 13 shots, while the Bobcats held a 7-1 advantage in corner kicks.

Willets made a sprawling save on a strong header by Gwen O’Brien in the ninth minute to keep the contest scoreless. Less than a minute later, Lees-McRae’s Alexa Todd chipped a shot over a hard-charging Willets, but senior defender Anna Capra was there to clear the ball over the end line before it entered the net. Willets would post another stop in the 27th minute.

The Bobcats scored on a 13-yard shot by Taylor Barrineau at the 30:32 mark. Just two minutes later, FMU graduate student Dayle McEwen nearly came up with an equalizing score, but her header off a cross from senior Faith Allen sailed over the crossbar.

McEwen again looked to even things up, but her strong shot from the top of the penalty area was corralled by Roughton in the 36th minute. A header by McEwen off a long throw-in by Allen forced Roughton to again come up with a stop with 2:19 remaining in the half.

Only 4:42 into the second stanza, McEwen nodded a header toward goal that glanced off the crossbar. The Collinsville, Ill., native led Francis Marion with seven shots.

The margin doubled in the 74th minute when Ivy Cagno took a short pass in the penalty area following a corner kick and poked in a 4-yard attempt.

Francis Marion (12-8) (8-0), winners of eight straight matches, will host local rival UNC Pembroke on Wednesday at 7 p.m. in the latest episode of the Battle for I-95 and a show down for first place in the East Division standings. FMU’s win streak is its longest in eight years.

For the second night in a row, junior Gracie Davis led the Patriots with 15 kills and a .400 hitting percentage (.424 to be exact on Saturday). Sophomore Lexi Albright recorded 11 kills and 13 digs for her third double-double of the season, while graduate student Kayla Arthur had nine kills, two service aces, and two blocks.

Francis Marion hit a sizzling .405 in the opening set with only one attack error in 37 swings. The two squads were knotted at 10-10 and FMU held a slight 16-13 edge before finishing the set with a 9-3 run.

The Patriots trailed early in set No.2, but took the lead for good at 10-9 on a Belmont Abbey attack error. The Crusaders closed to within 24-23, but another attack error provided Francis Marion with the clinching point.

FMU took the lead for good in the third set at 3-2 on a kill by Albright. The Patriots gradually pulled away, including scoring the final five points of the match behind the serving of Arthur.

Lincoln Memorial opened the match with a victory in the first set, but Mullen achieved her career milestone as well in the frame.

The Cobras posted a 25-21 victory in the second set to tie the match. LMU jumped ahead 11-7, before the Cobras went on a 12-8 run to go ahead 19-15 in the set. Each team would record six more points in the set with the Cobras coming out on top.

Lincoln Memorial would clinch the match with set victories of 25-21 and 25-16.

Taylor Parker paced the Cobras with 11 kills, while five others also registered kills in the match. Mullen dished out a team-high 17 assists in the match, while Ashley Carson added 15.

The Cobras return to action on Tuesday to host Fayetteville State in non-conference action. First serve is set for 6 p.m. from the DeLoach Center, with video and live stats available at www.cokercobras.com.

Newberry struck first with a goal five minutes in, before Britt Kabo evened the game with an unassisted goal four minutes later. Newberry would take a 2-1 lead with a marker with three and a half minutes to play in the frame, before taking a 2-1 lead to the second quarter.

Rylie Cordrey would tie the game yet again for Coker with an unassisted marker with five minutes to go in the second, as the teams went to the half tied 2-2.

The Wolves scored twice in the third quarter to take a 4-2 lead to the fourth.

Newberry would score to extend its lead further six minutes into the fourth, while Cordrey would score her second of the game off a penalty corner assist from Coda Fisher to bring the game to its final score.

Kelsey Sithole led the Cobras with five shots in the game, while Britt Kabo had four and Cordrey added three. Lieke Bruijn also contributed one shot in the contest. Kelsey Gibbons made eight saves between the pipes, while Kiarra Rivera also contributed one defensive save on the back line.

The Cobras return to action on the road next Saturday at Belmont Abbey. The action is set for a 1 p.m. start, with video and live stats available at www.cokercobras.com.

BISHOPVILLE, S.C. — Dominique Washington rushed for two touchdowns and passed for another as Lee Central clinched second place in Region 7-2A …

JOHNSONVILLE, S.C. — Hannah-Pamplico’s Zander Poston was a force through the air, and Johnsonville’s Daquan Burroughs was a force on the groun…

South Florence has thrived on defense

FLORENCE, S.C. – South Florence has a knack for knocking a ball carrier back or taking the ball away. In eight games, the Bruins’ defense has …

Francis Marion’s Alvaro Zamora (right) scored on a penalty kick in the 65th minute as the Patriots earned a 1-0 victory over Lees-McRae on Saturday to stay unbeaten in Conference Carolinas play.

Francis Marions' Dayle McEwen (10) looks to move into scoring position during the Patriots' 2-0 loss to Lees-McRae on Saturday.