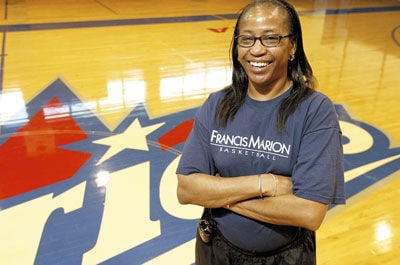 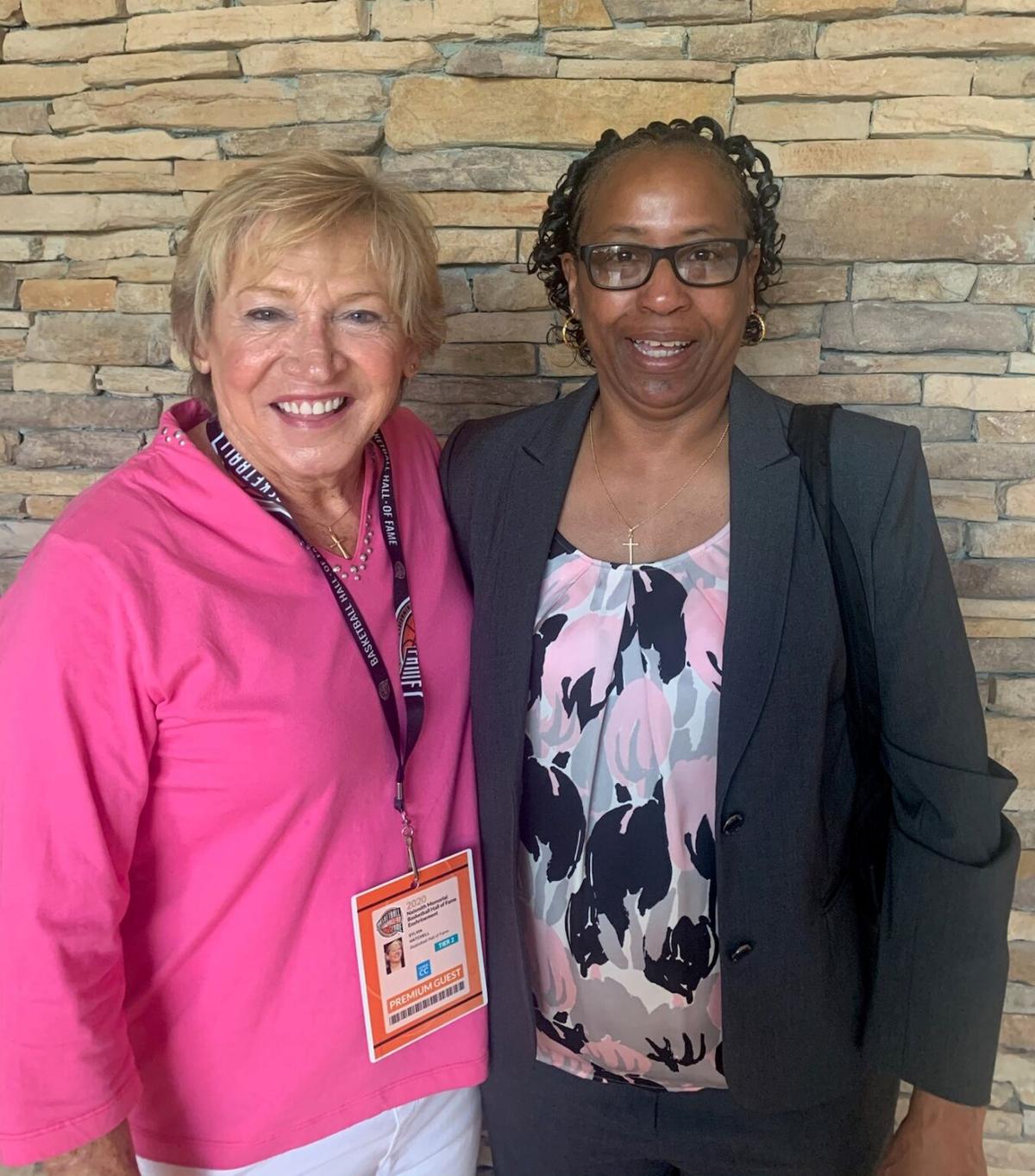 Wilson High graduate and Francis Marion University Hall of Famer Pearl Moore, right, is joining former coach Sylvia Hatchell (left) in the in the Naismith Memorial Basketball Hall of Fame after being elected as part of the 2021 class on Sunday.

SPRINGFIELD, Mass. – It was a phone call nearly 30 years in the making, and one that Pearl Moore actually missed initially.

“I had already received a phone call (Wednesday) from (John Doleva), but I hadn’t gotten up yet – I’m retired now,” Moore said, laughing.

Doleva is the president and CEO of the Naismith Memorial Basketball Hall of Fame, and after a few rounds of phone tag, Doleva was finally able to reach the former Wilson High and Francis Marion University standout.

“He told me he his name was John and he was from the Naismith Basketball Hall of Fame,” Moore said. “I said, ‘Well how can I help you John?’ He said, ‘I just wanted to tell you that you’re in the Class of 2021.’

It was moment that was a long time coming for the all-time leading scorer in women’s basketball history. A Florence native, Moore played for the Patriots from 1975 through 1979. The four-time All-American amassed 4,061 career points and was one of the first inductees into the FMU Athletics Hall of Fame in 1992.

She was nominated by the university for induction into the Naismith Memorial Basketball Hall of Fame in 1994, and her name remained in the nomination process until the Hall announced her selection early Sunday morning. Moore was able to attend the announcement ceremony in Springfield, Massachusetts, to honor the new members.

Finally, in 2011, Moore was inducted into the Women’s Basketball Hall of Fame in Knoxville, Tennessee. In 2018 she was recognized by the Women’s Hall as part of its "WBL Trailblazers of the Game" display.

That same year the city of Florence honored Moore by naming its new basketball facility on Barnes Street after her − the Pearl Moore Basketball Center. The former Tiger and Patriots also has a hand in promoting and running various youth basketball camps throughout the area.

“It’s an honor that she’s well-deserving of,” Florence Mayor Teresa Myers-Ervin said. “…The fact that we have a gymnasium in her honor shows that Florence has great potential when it comes to our citizens, and I’m very happy for Mrs. Moore. It’s well-deserved and I would like to congratulate her.”

Moore has also maintained a strong presence in the city of Florence as a community pillar and role model, the mayor added.

“It’s wonderful that she remembers her hometown and she understands that it’s important because she has been so successful that the children here in this city have the opportunity to meet her and see her as a role model,” Myers-Ervin said. “…She has the talent and she has the ... [fame], yet she’s always been so humble with that all and always been such a wonderful community member and servant.”

After starting her career at Anderson Junior College in the fall of 1975 (eight games, 177 points), Moore transferred to the Patriots who did not begin their season until the first of the year. A 5-foot-7 guard, Moore went on to post 3,884 points in a FMU uniform.

In her junior season, Moore scored a then single-game record of 60 points in a 114-71 victory over Eastern Washington State College in the 1978 Association of Intercollegiate Athletics for Women Small College National Tournament. In her final game during an AIAW Small College Regional Tournament consolation game against the University of Tennessee at Chattanooga, Moore scored 42 points to break the previous school mark of 4,045 set by Travis Grant at Kentucky State University.

She averaged 30.6 points per game in 127 games at FMU, and was part of coach Sylvia Hatchell's program that went 85-42 and earned three national tournament appearances.

She remains as the only female player to eclipse 4,000 points for her career.

“The ultimate honor for the career scoring leader of women’s college basketball,” FMU Athletic Director Murray Hartzler said. “Pearl is so deserving of this recognition. The entire university is extremely proud to see one of our alumnus enter a national hall of fame where her name will live on forever. Pearl has accomplished much in her career; for our school, the Florence community, and the game of basketball.”

Moore played two seasons in the Women's Pro Basketball League with the New York Stars and St. Louis Streak after finishing her collegiate career, earning an All-Star nod in 1981, and also played one season in Venezuela.

She won a championship with the Stars during the 1979-80 season. They defeated the Iowa Cornets 125-114 in Game 4 of the finals, with Moore leading the way with 27 points.

NBA Finals: What is the best result for the books?

Should there be concern around the Yankees?

Should there be concern around the Yankees?

FLORENCE, S.C. – Cole Drummond knows there is more than one way to catch a fish. He simply must discover them.

MARION, S.C. – Brian Hennecy played on Marion’s 1987 state runner-up team, and was offensive coordinator on the one in 2020.

Wilson High graduate and Francis Marion University Hall of Famer Pearl Moore, right, is joining former coach Sylvia Hatchell (left) in the in the Naismith Memorial Basketball Hall of Fame after being elected as part of the 2021 class on Sunday.