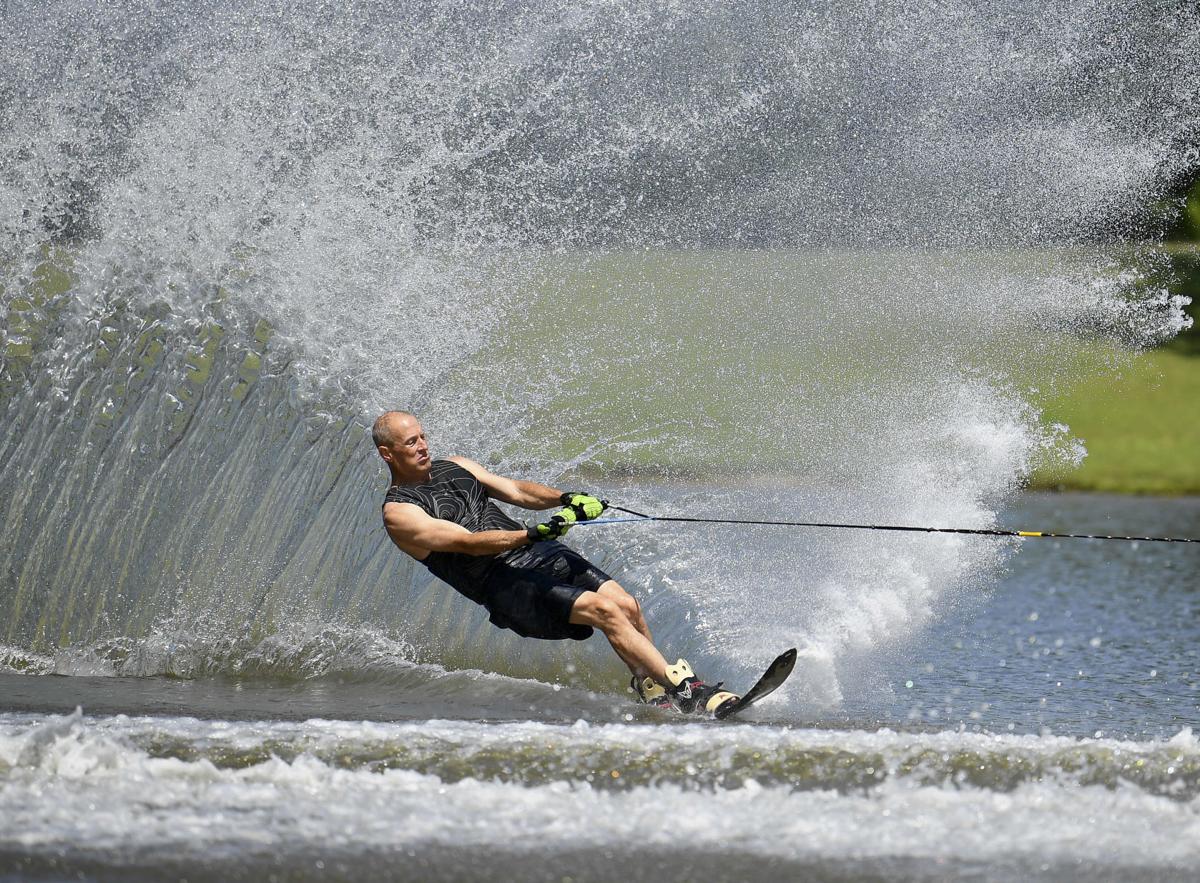 Mark Skeen is surrounded by a wall of water as he navigates the slalom course during the S.C. State Waterski Championships, Saturday July 11, 2020, at Emerald Lake, Timmonsville, SC 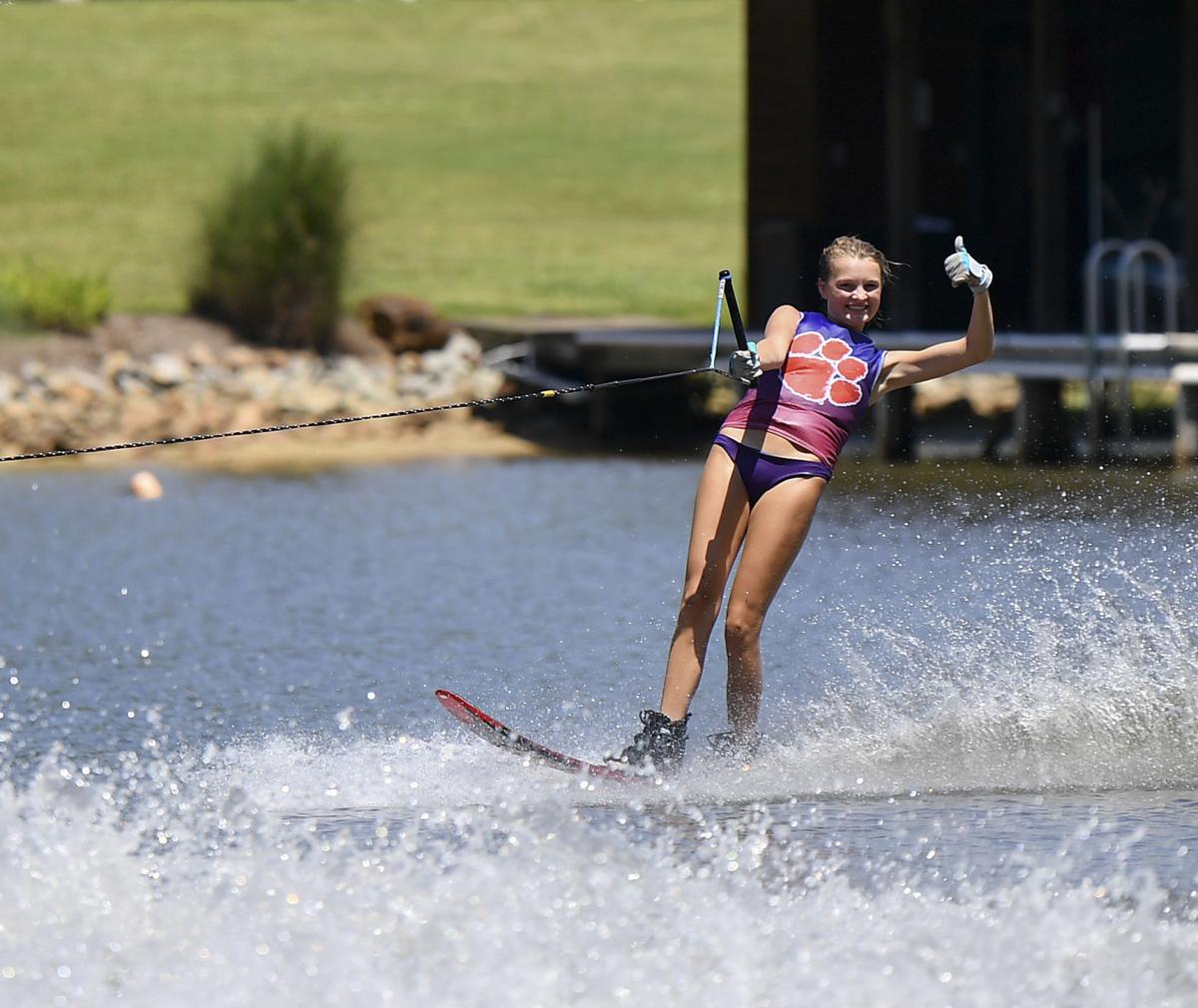 Abbie Skeen gives a thumbs-up after a successful run on the slalom course during the S.C. State Waterski Championships, Saturday July 11, 2020, at Emerald Lake, Timmonsville, SC.

TIMMONSVILLE, S.C. — Abbie Skeen and her sister, Ella, looked at each other and laughed after being asked what their father, Mark, teaches as their water-skiing coach.

Ella chimed in with, “And hips up.”

They make the sport look easy. But when it’s all in the family, it’s like second nature.

“You learn the fundamentals, and once you get up, it’s like riding a bike,” Abbie said while taking a break in Saturday’s South Carolina state championships at Emerald Lake Water Ski Club.

Their brother, Noah, even skis. But these days, his focus is on baseball after signing with USC Lancaster to play that sport.

But the Skeens’ water-skiing frenzy began with Mark, who began his passion while growing up in Central North Carolina. He garnered multiple state championships en route to helping found the water-skiing program at UNC Charlotte.

Mark agreed the learning is the hardest part.

“It’s probably the initial learning. But once you dedicate yourself to it and spend some time in the water, most people pick it up,” said Mark, whose wife, Katie, also skis. “We lived in North Carolina until we moved down here in 2010. So the kids grew up on the water.”

On this day, Emerald Lake, Mark and Ella also competed in slalom. Abbie, in addition to the slalom, competed in the trick-ski discipline.

While Mark wouldn’t delve into exactly how many state skiing crowns he owns, he did talk about his daughters’ talents.

“I think Abbie is a great skier; she’s dedicated to it,” he said. Abbie is a rising sophomore who competes for Clemson University’s club team, which placed seventh, nationally, and won the spirit award.

“She loves the sport, probably not as much competitive into it, but she just loves giving back to it,” Mark said. “She’s a great trick-skier, she grew up on one, and that’s all she did.”

“She picked the sport up a couple of years ago and just recently had an interest in competing, so we come out and ski quite a bit,” Mark said.

“I’m not a very aggressive skier, versus her,” Abbie said. “But I told her yesterday she needed to be aggressive, and she did it.”

During times like these, when family activities haven’t been exactly easy to find, the Skeen family found the water to be the perfect oasis to not only practice together, but bond together.

“We’ve been at home a lot, so there have been a lot of opportunities to come to the lake, so we’ve come here to ski,” Mark said. “For me, I just forget about everything while on the water.”

Abbie, meanwhile, sees time on the lake as not just family, but an opportunity to see extended family.

“You can go to any tournament and see people you’ve been seeing since you were little,” she said. “So that’s fun to see everybody. You stick through it your whole live, and you have that second family, too. That’s what I like about it.”

An eight-time APSE national award winner, Scott authored, "70 Years of Thrills and Chills, Drama and Dents at Darlington Raceway." Scott has received several SCPA awards, including 3 for 1st place since moving to Florence in 2015.

KANSAS CITY, Mo. — The Kansas City Chiefs had lost Patrick Mahomes to a concussion and were in danger of losing the game.

Mark Skeen is surrounded by a wall of water as he navigates the slalom course during the S.C. State Waterski Championships, Saturday July 11, 2020, at Emerald Lake, Timmonsville, SC

Abbie Skeen gives a thumbs-up after a successful run on the slalom course during the S.C. State Waterski Championships, Saturday July 11, 2020, at Emerald Lake, Timmonsville, SC.