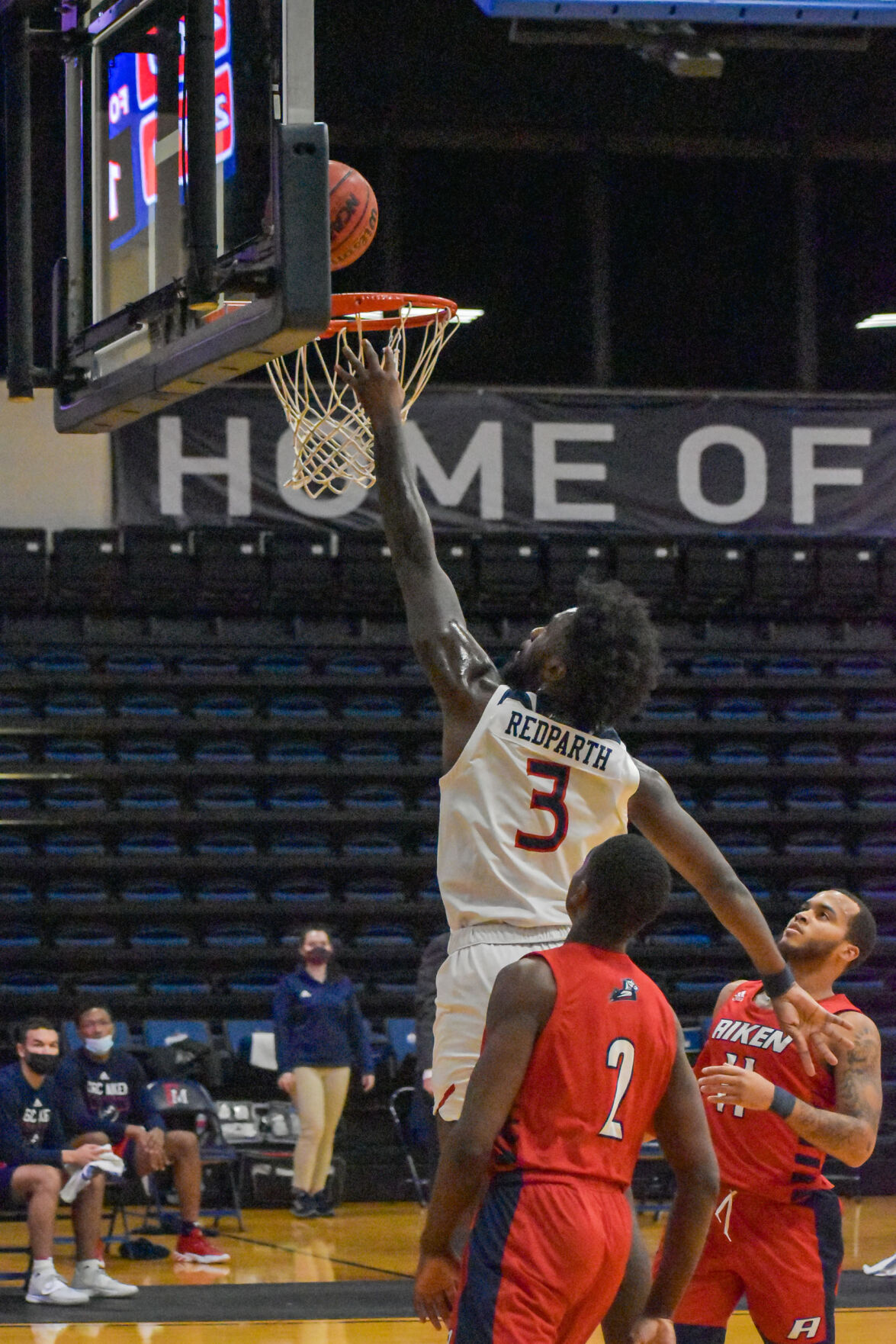 Holden Redparth (3) puts up a shot for Francis Marion during Wednesday's 70-66 loss to USC Aiken at Smith University Center. 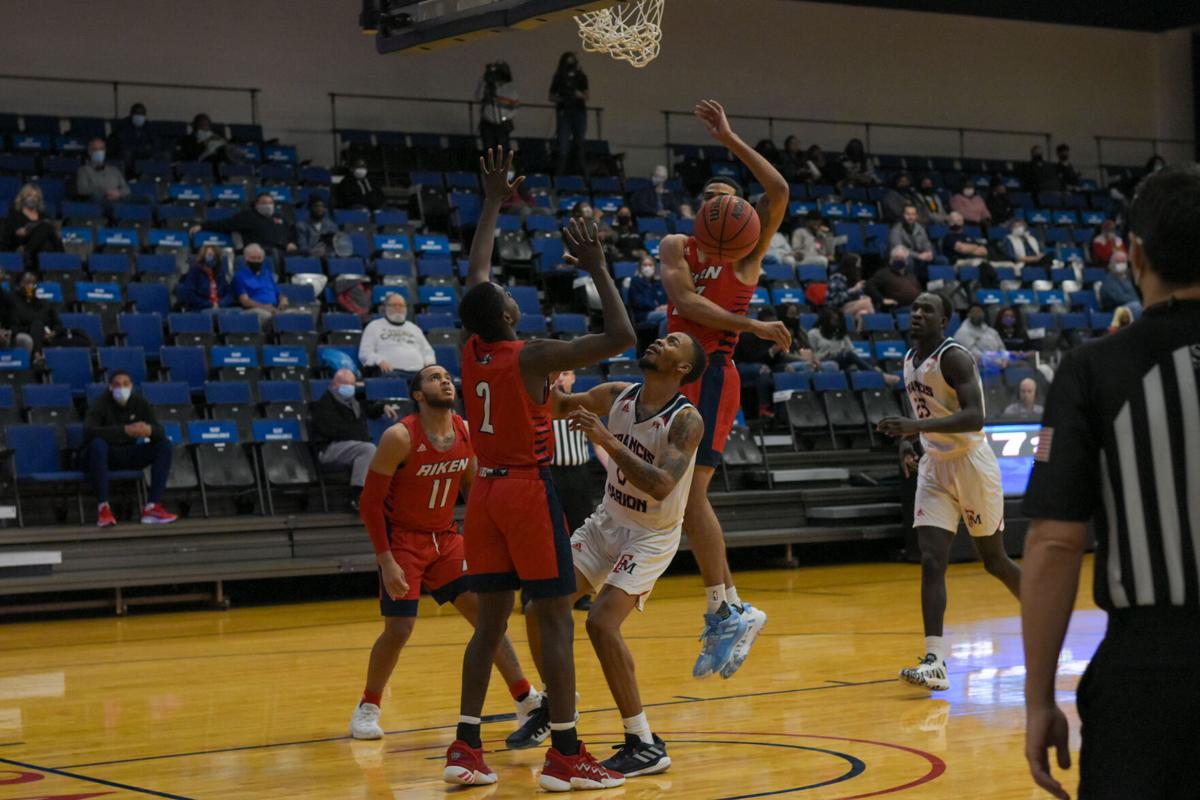 FLORENCE, S.C. — Gary Edwards thought the physical nature of Wednesday’s matchup against USC Aiken took a toll on his Francis Marion squad in the second half.

“I think we ran out of gas a little bit in the second half,” the Patriots coach said after his team let an 11-point advantage slip away. “They were out-toughing us — taking the ball out of our hands. It was a physical game all night, and they kind of out-toughed us that second half. We were really getting tired.

“But we hung in there and had a chance at the end. The end was just inexperience.”

FMU had two opportunities to pull out a late victory in the final 10 seconds at Smith University Center, but one resulted in a missed rebound and the other a desperation three-pointer that missed its mark as the Pacers wound up with the 70-66 victory.

The Patriots are now 2-3 overall and in Peach Belt Conference play. They’ll take the floor again Saturday for a 3:30 p.m. home matchup against Young Harris. The FMU women will also return to action against Young Harris with tip-off scheduled for 1:30 p.m.

“We’ll be better the next time we’re in that situation, that’s for sure.”

It was an improbable finish as a rough night at the free throw line nearly came back to haunt USCA (4-2, 3-1). The Pacers were just 9 of 21 for the game (42.9%) and missed four critical shots in the last nine seconds.

With USCA up by five, FMU’s Ben Jones connected on a trey for his only bucket of the night to pull the Patriots back within 68-66.

USCA’s Jakobi Pearson was then fouled, but missed on both attempts from the charity stripe. However, Francis Marion could not come up with the rebound and had to foul again.

This time, Latreavin Black missed both shots and Ja'Von Anderson was there to grab the rebound, but his hurried shot from the beyond the arc failed to connect and the Pacers wound up with the ball.

They sank their last two free throw attempts to ice the game and cap off a double-digit rally. FMU led 48-37 with 14:11 left to go when a 7-0 run by USCA closed the gap to just four.

“We don’t really have guys that can break people down and make one-on-one plays; we have to run our stuff,” Edwards said. “They were being physical and not allowing us to run some of our stuff. But there are some things we can do to remedy that.”

Another issue was being without Holden Redparth for most of the second half. One of the team’s top scorers overall, Redparth had 11 points at the break to lead the Patriots, but only played about six minutes of the second half before fouling out.

“We were struggling offensive and a lot of that was their physical defense,” Edwards said. “We just gave up too much junk — too many offensive rebounds, too many 50-50 balls.

“…We’ll put the film on and learn from it. I think if we’re in that situation again Saturday we’ll do a better job.”

In Reparth’s absence, Langston Gaither picked up the scoring slack with a game-high 27 points — including four three-pointers.

But those were the only players in double figures for the Patriots. Alex Cox was next with seven points followed by Anderson and West Florence's Darius Dawson with six apiece.

Dawson did set a new career high with 14 rebounds, but the Patriots were out-rebounded in the game 45-37 overall and the Pacers had 19 offensive rebounds compared to FMU's 12.

USCA also beat the Patriots in the paint 34-22. The Pacers had five players post double figures led by Anyeuri Castillo (16) and Black (14).

Black also finished with 13 rebounds and Pearson turned in a double-double as well with 11 points and 10 boards.

FLORENCE, S.C. − USC Aiken mounted a double-digit comeback in the second half and held off the Francis Marion University men's basketball team…

Holden Redparth (3) puts up a shot for Francis Marion during Wednesday's 70-66 loss to USC Aiken at Smith University Center.