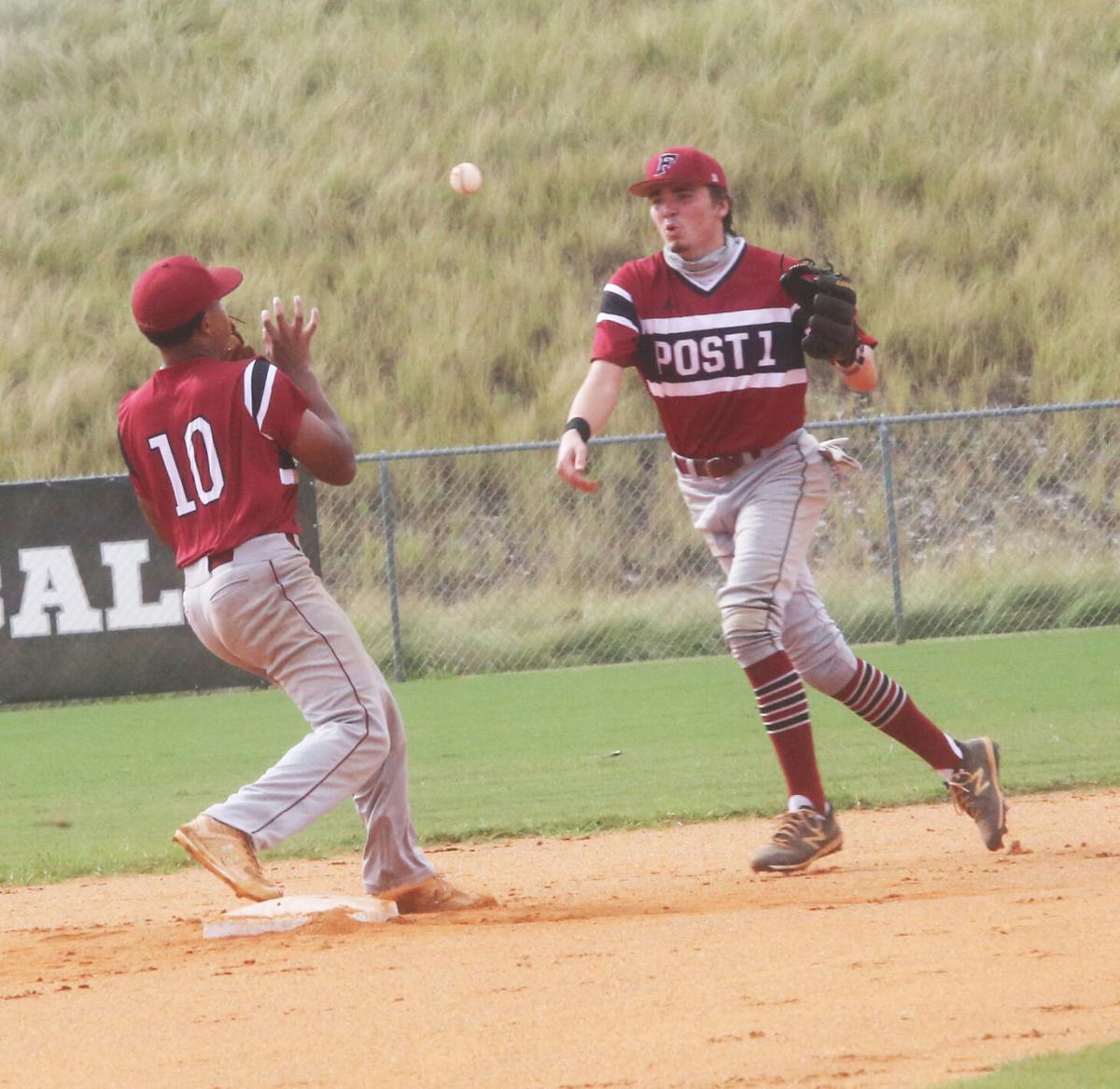 Florence second baseman Owen Taylor (right) tosses the ball to shorstop Korique Rainey to get the out at second during Wednesday's second-round state playoff game against West Columbia at Midlands Sports Complex. 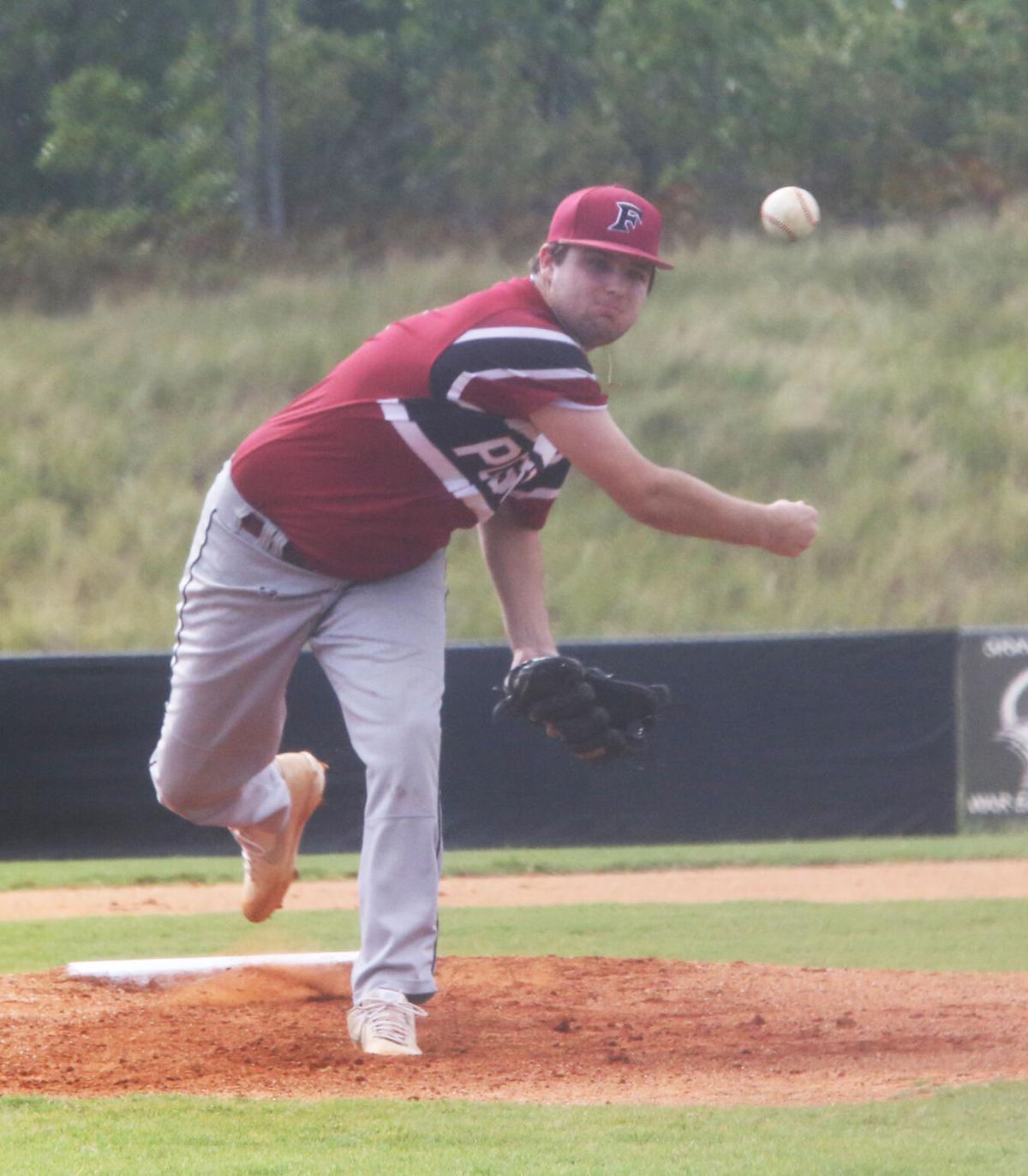 WEST COLUMBIA, S.C. – Florence saw its S.C. American League season come to an end Wednesday at Midlands Sports Complex with an 11-9 loss to West Columbia, but not without lingering questions about what might have been.

Specifically, how the decisive third game might have turned out minus a controversial call in the top of the sixth inning.

With Post 1 trailing 10-9, a two-base throwing error by WC allowed Caleb Oakley to race all the way around from first to home – sliding in as catcher Blake Paylok got the ball.

Oakley appeared to slide in before the ball arrived, but the home plate umpire ruled Paylok blocked the plate and called Oakley out.

“That killed our momentum – that ties the game. For that call to happen in that type of a game…for the umpire to miss that one…that was horrible.”

Post 1 had rallied from 10-7 down in that inning to pull within one, but got no closer as Post 79 added an insurance run in the bottom of the sixth to complete the scoring.

It was a wild final outing for Post 1 which saw Urquhart’s squad fall behind 7-0 before rallying to tie the game.

Noah Carter provided the big blow with a third-inning grand slam, and Florence got runs driven in from Mikey Morris, D.P. Pendergrass and Owen Taylor in the fourth to help complete the comeback.

It was short-lived, however as a two-out error in the bottom of the fourth paved the way for a three-run outburst by West Columbia that saw it retake a three-run lead.

Thomas Skipper came on in the third inning in relief for his longest outing of the season.

Post 1 found itself playing a decisive third contest thanks to a 12-7 victory earlier in the day in Game 2.

Florence got on the board first with a wild pitch and Taylor followed soon after with an RBI single to put Post 1 up 2-0 in the third.

West Columbia rallied with three runs in its half of the inning, with two scoring on wild pitches and another on Dylan Williamson’s RBI single.

It stayed that way until the top of the sixth, when an RBI single by Kody Hanna and a sacrifice fly by McIver Wallace helped Post 1 retake a 4-3 lead.

West Columbia threatened, putting two runners on with no outs in the bottom of the inning before Thomas Skipper entered in relief and got a lineout double play to help Florence out of the jam.

Post 1 put the game out of reach in the seventh by sending 14 men to the plate. Taylor hit a three-run homer while Carter and Oakley each drove in runs as Florence took a 12-3 lead.

West Columbia rallied to put four on the board, but not enough to avoid Game 3.

Florence second baseman Owen Taylor (right) tosses the ball to shorstop Korique Rainey to get the out at second during Wednesday's second-round state playoff game against West Columbia at Midlands Sports Complex.