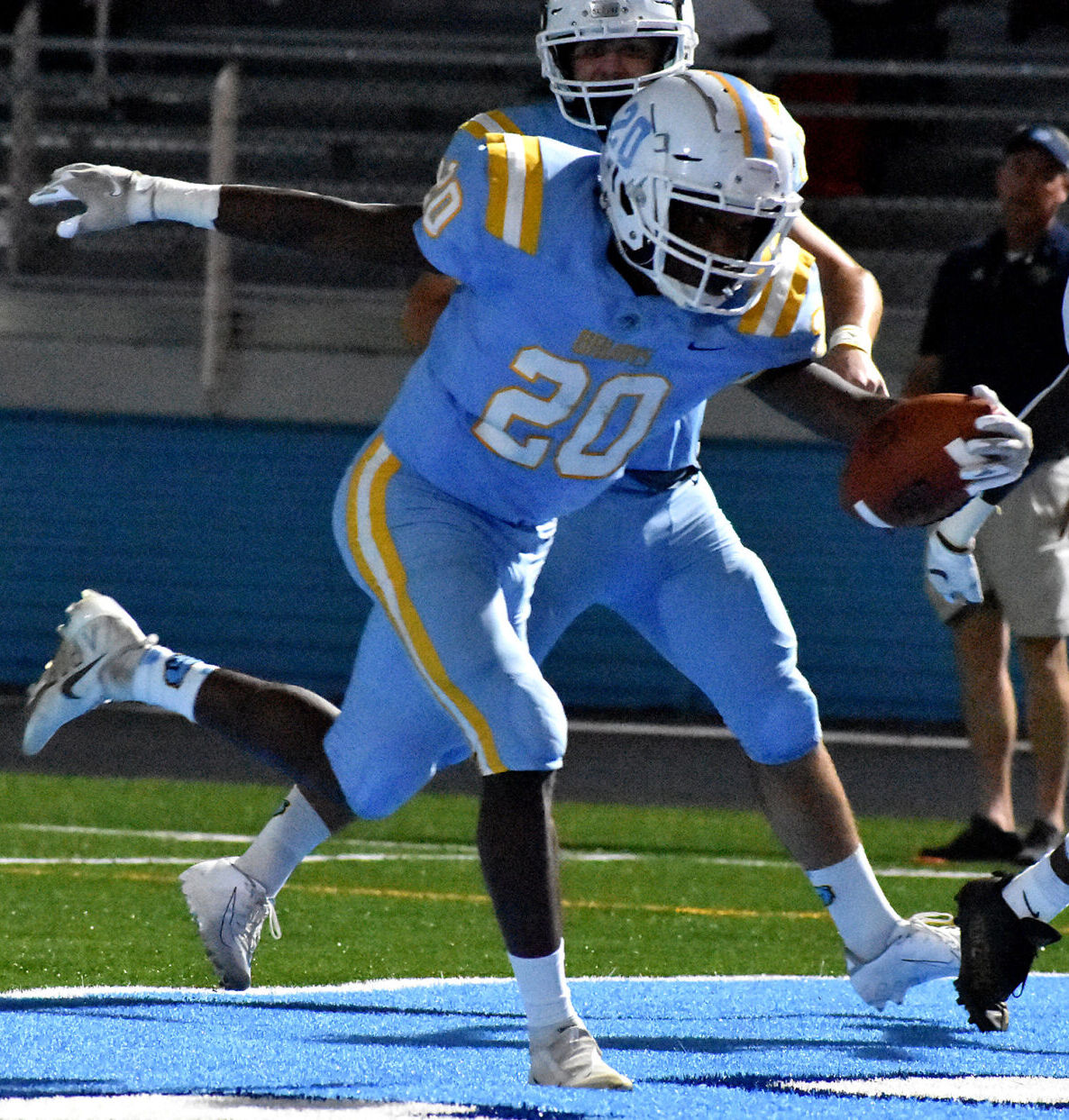 Both South Florence and Hartsville will bring strong rushing attacks into Friday’s game, with the Bruins’ Tyae McWhite (top) and Hartsville’s Carmello McDaniel (bottom) among the leaders in the Pee Dee. 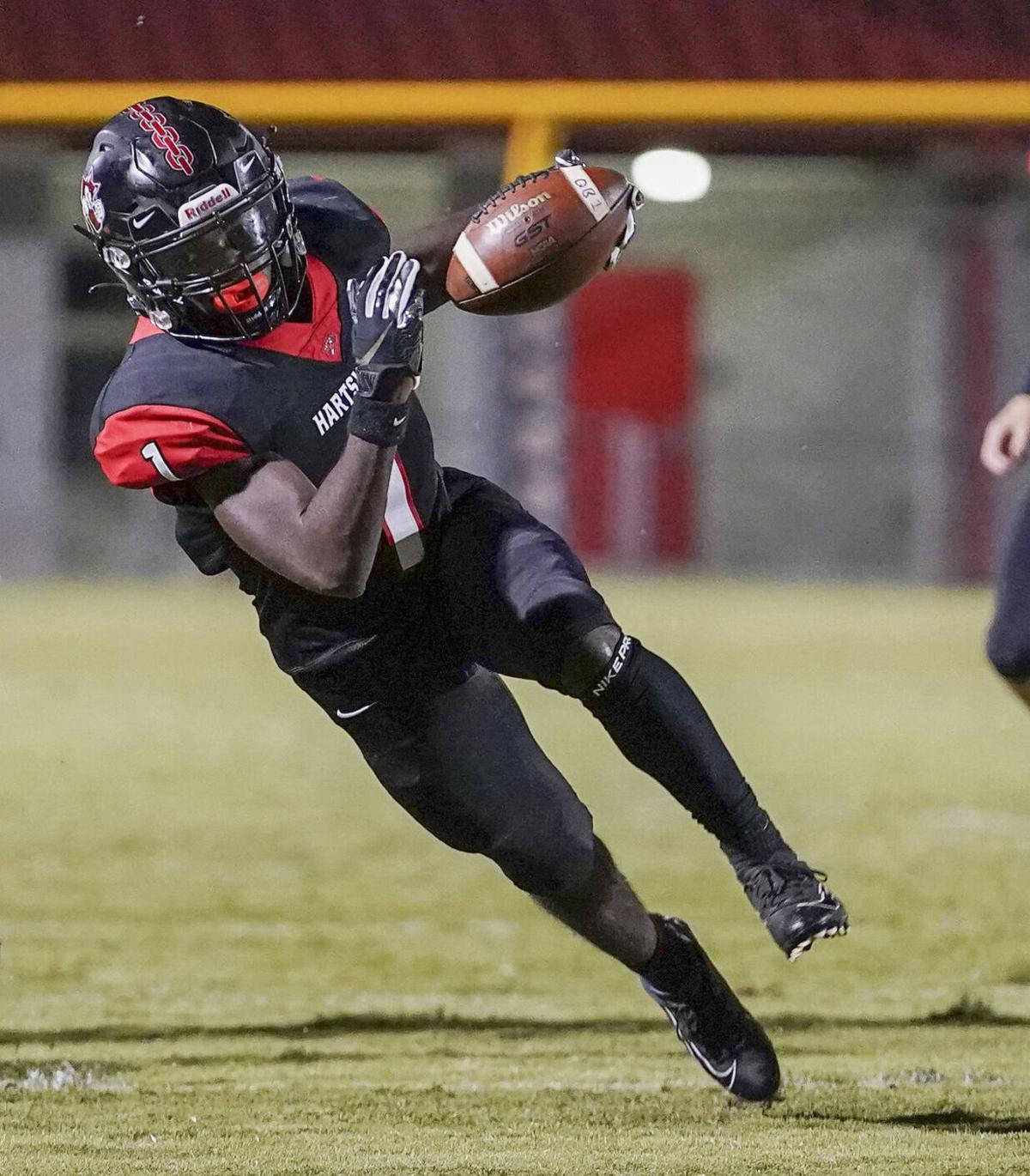 FLORENCE, S.C. – The 2021 season has already been a memorable one for the South Florence Bruins, who have already tripled their win total from a season ago.

But the way the team will be remembered is likely going to be determined during the next three weeks, second-year coach Drew Marlowe said.

“It’s great to have had the success that we’ve had,” Marlowe said. “But this will truly be the story of our team over the next three weeks. And we’re going to find out if we’re any good or not.”

The Bruins are set to begin an end-of-the year gantlet against three of the top teams in Region 6-4A if not the area – starting with Hartsville on Friday at 7:30 p.m. at Bruin Stadium in the Morning News Game of the Week.

South Florence (6-1, 3-0) is tied with Myrtle Beach for the top spot in the region standings with that big matchup looming next week followed by the rivalry game against West Florence.

But first, the Bruins will have to find a way to slow down the Red Foxes (2-4, 2-1), who had rebounded from a rough early start to post back-to-back region wins before the Seahawks ended that surge last week.

Even so, Hartsville sits in third place with an eye on moving back into one of the top two spots with a win Friday.

“Anytime (Hartsville coach Jeff Calabrese) is on the opposing sideline, he commands your full attention,” Marlowe said. “What they do on offense, what they do on defense – they do a lot. They’ve got great players and they’re just a really, really tough team to prepare for on both sides of the ball.

“So we’ve got our work cut out for us, but we’re excited about the challenge.”

South’s defense has been one of its strong points this season after allowing just 97 points in seven games (13.9 points per game average), but that unit will be tested against a Hartsville squad that had scored at least 28 points in every game prior to last week (14).

Led by running backs J’Shawn Anderson and Carmello McDaniel, the Red Foxes’ offense has been humming most of the year. The duo combined for more than 1,000 yards on the ground and 16 touchdowns prior to last week.

Quarterback McKendrie Douglass also accounted for more than 800 yards of offense and seven combined scored prior to last week’s 47-14 loss to MBHS.

“Myrtle Beach played exceptionally well,” Calabrese said. “Anytime you don’t score a lot and give up a lot of points, things went wrong and that’s for us as coaches to evaluate those things and make adjustments.

“Myrtle Beach is a spread football that is a little different from South Florence. South Florence comes downhill with power and counter and play-action, so it’s a different game.”

Tyae McWhite and Malik Terry have given the Bruins their own 1-2 punch at running back as the pair has combined for more than 1,200 yards and 14 scores.

Even with junior standout quarterback LaNorris Sellers still out, South has remained solid behind center as Quincy Rhodes has stepped in and thrown for 245 yards and four TDs.

“They run the ball extremely well and they’re very physical,” Calabrese said. “Offensively, they’re very efficient with how they’re going about their game – multiple tight ends and then they can hit you with a pass when you’re playing too much run.

“Defensively, they’re fast; they’re tough and play hard. They’re 6-1 for a reason and it’s another chance for us to play a playoff-caliber football team and see if we can make some strides and try to be a playoff team ourselves.”

NFL Week 6 Market: Will weather be a factor?

BISHOPVILLE, S.C. — Dominique Washington rushed for two touchdowns and passed for another as Lee Central clinched second place in Region 7-2A …

JOHNSONVILLE, S.C. — Hannah-Pamplico’s Zander Poston was a force through the air, and Johnsonville’s Daquan Burroughs was a force on the groun…

MULLINS, S.C. -- The 14th annual Anderson Brothers Bank Tobacco Bowl game between rivals Mullins Auctioneers and Marion Swamp Foxes was another Monday night football showdown at Fox Field. The two teams clashed on a Monday date for the third straight year. It was third straight win for the Swamp Foxes as quarterback Gabriel Cusack rushed for 179 yards on 16 carries and three touchdowns in a 27-8 victory.

FLORENCE, S.C. – Many feelings were swirling around for Alice (Allie) Murrell on Monday.

Both South Florence and Hartsville will bring strong rushing attacks into Friday’s game, with the Bruins’ Tyae McWhite (top) and Hartsville’s Carmello McDaniel (bottom) among the leaders in the Pee Dee.