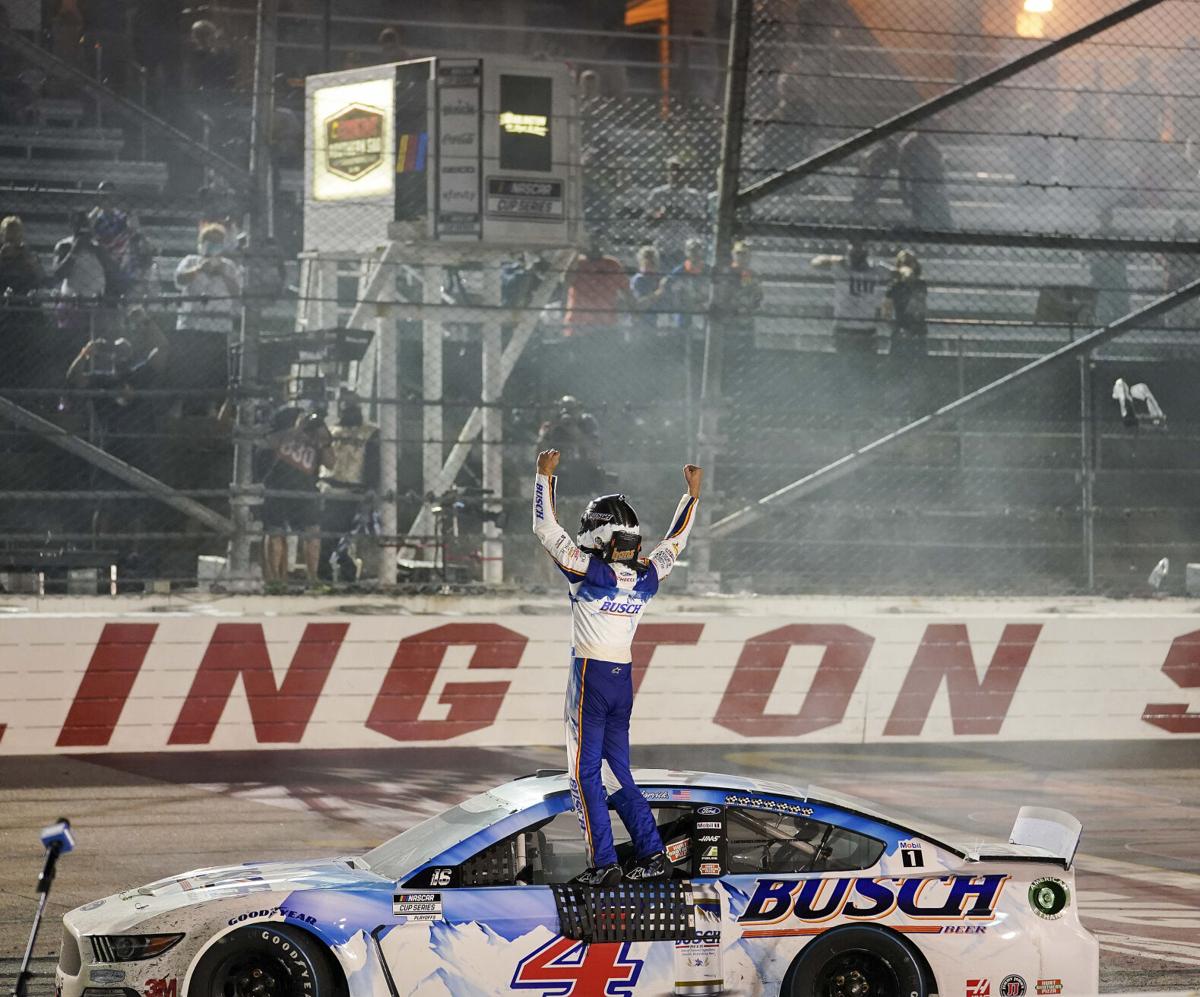 Kevin Harvick salutes the fans on Sept. 6 after winning the 2020 NASCAR Cook Out Southern 500 at Darlington Raceway. 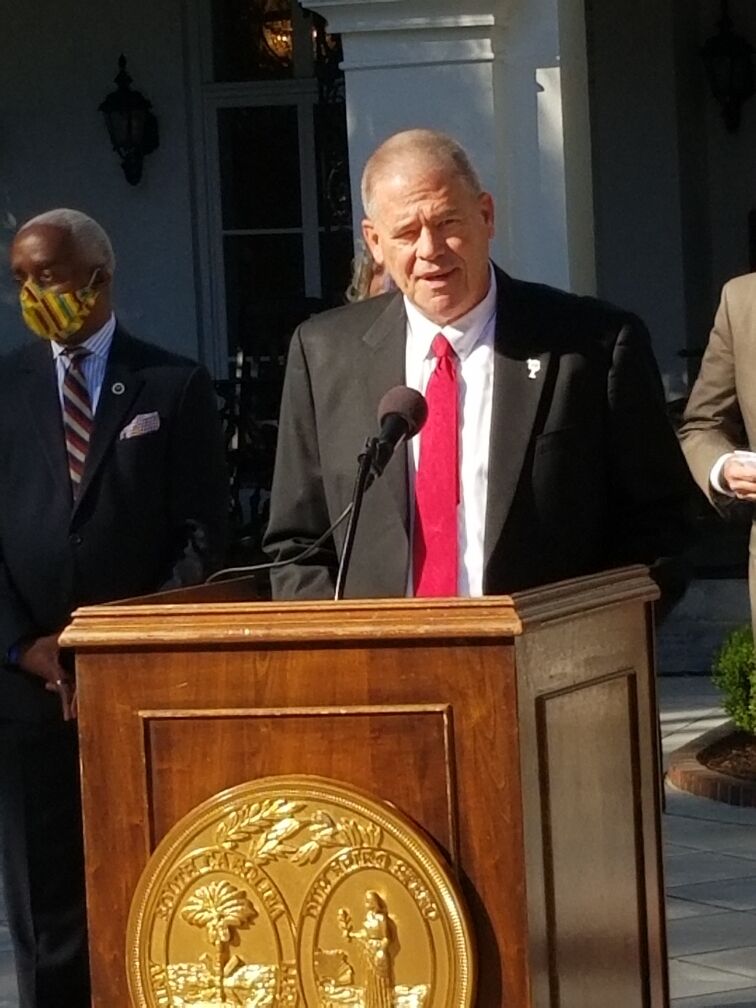 COLUMBIA, S.C. — For the first time since 2003, NASCAR is scheduling in advance two Cup races to be held in the same year at Darlington Raceway for the 2021 season: May 9 and Sept. 5.

The Sept. 5 event is the Southern 500, which will once again kick-start the 10-race playoffs.

McMaster isn’t the only happy person.

“The folks at the race track got another spring in their step this morning with this news,” said Kerry Tharp, Darlington Raceway’s president. The 2021 schedules for the Xfinity and Camping World Truck Series will be announced later this fall.

Although Darlington hosted three Cup races this season, the two in May were given to Darlington after the season started, replacing Chicagoland’s June 21 Cup event and Richmond’s April 19 Cup race because of the pandemic.

Darlington's stepping up for NASCAR in a time like that is perhaps one big reason for Wednesday’s announcement at the governor’s mansion.

“Having the races back here in May was kind of a big, big positive in our favor when it came to this,” Tharp said. “I think that opportunity presented other opportunities for us. It shows the leadership of this sport that Darlington can handle these things, and Darlington does it in style.”

What Darlington did in May also transcended motorsports.

“When we returned to live sports back in May, that was historic,” Tharp said. “It wasn’t just live NASCAR racing; we’re talking about live sports.”

Then, this year happened.

And now, here we are, with NASCAR bestowing once again this two-race-in-one-year honor upon the sport’s oldest superspeedway. One likely big reason Darlington is starting the playoffs again is the same as the reason for this year: NBC’s commitment to also televising the Olympics, which are postponed until next year (July 23 through Aug. 8) because of the pandemic. Meanwhile, NASCAR dropped Chicagoland Speedway and Kentucky Speedway from its schedule, altogether, marking the first time NASCAR has dropped a track completely from the schedule since removing nearby Rockingham in 2005.

The Southern 500 was first held either on Labor Day or Labor Day Weekend from 1950 through 2003 before NASCAR moved that Labor Day Weekend event to California Speedway, starting in 2004. Also in 2004, Darlington’s lone Cup event was a November Southern 500; that was part of what is now known as NASCAR’s playoffs.

Then, that Labor Day Weekend race was at Atlanta Motor Speedway from 2009 through ’14.

Meanwhile, in 2004, Darlington’s lone Cup race, the Southern 500, was held in November (part of what now is known as NASCAR’s playoffs), before making its run on Mother’s Day Weekend.

The first one was on May 10, 1952, in which there were two events in one day. Buck Baker won the 200-lap NASCAR Speedway Division race (open-wheel race cars with stock engines). Then, in the 100-mile Grand National Race that day, Dick Rathmann took the checkered flag.

Then, after five years of no spring races at Darlington, convertible races — each named the Rebel 300 — were held from 1957 to ‘62.

On May 11, 1963, Darlington evolved again with the Rebel 300 in the form of a Monza-style split event in stock cars for Grand National points. They ran two 151-mile races, and the average of the finishes determined the overall race winner. Joe Weatherly won the first race, and Richard Petty won the second. But because Weatherly was first in the opening race and second in the other, he was crowned the overall winner. Petty, meanwhile, was third behind runner-up Fireball Roberts.

Although this two-race deal — for now — is just for 2021, Tharp is optimistic this can become an annual deal.

“I can tell you the support we received from our fans, from the state and from NASCAR lead me to believe there is a very, very bright future for us to continue to hold two races at Darlington,” Tharp said.

A Darlington grandstand sellout is 47,000 fans. But for the Southern 500, up to only 8,000 were allowed to social distance. If some kind of social distancing is still needed next year, Tharp said, Darlington is ready.

“NASCAR has been a leader when it comes to protocols associated with this pandemic,” Tharp said. “We had a good plan in place Labor Day Weekend. If we need to use it for our next weekend, we certainly will. We hope we will be able to host more fans at the race track, but we’re flexible. And, we’ll do what’s best for the fans and the safety of the fans.”

But at the core of Wednesday’s news conference was also a statement by South Carolina.

Kevin Harvick salutes the fans on Sept. 6 after winning the 2020 NASCAR Cook Out Southern 500 at Darlington Raceway.