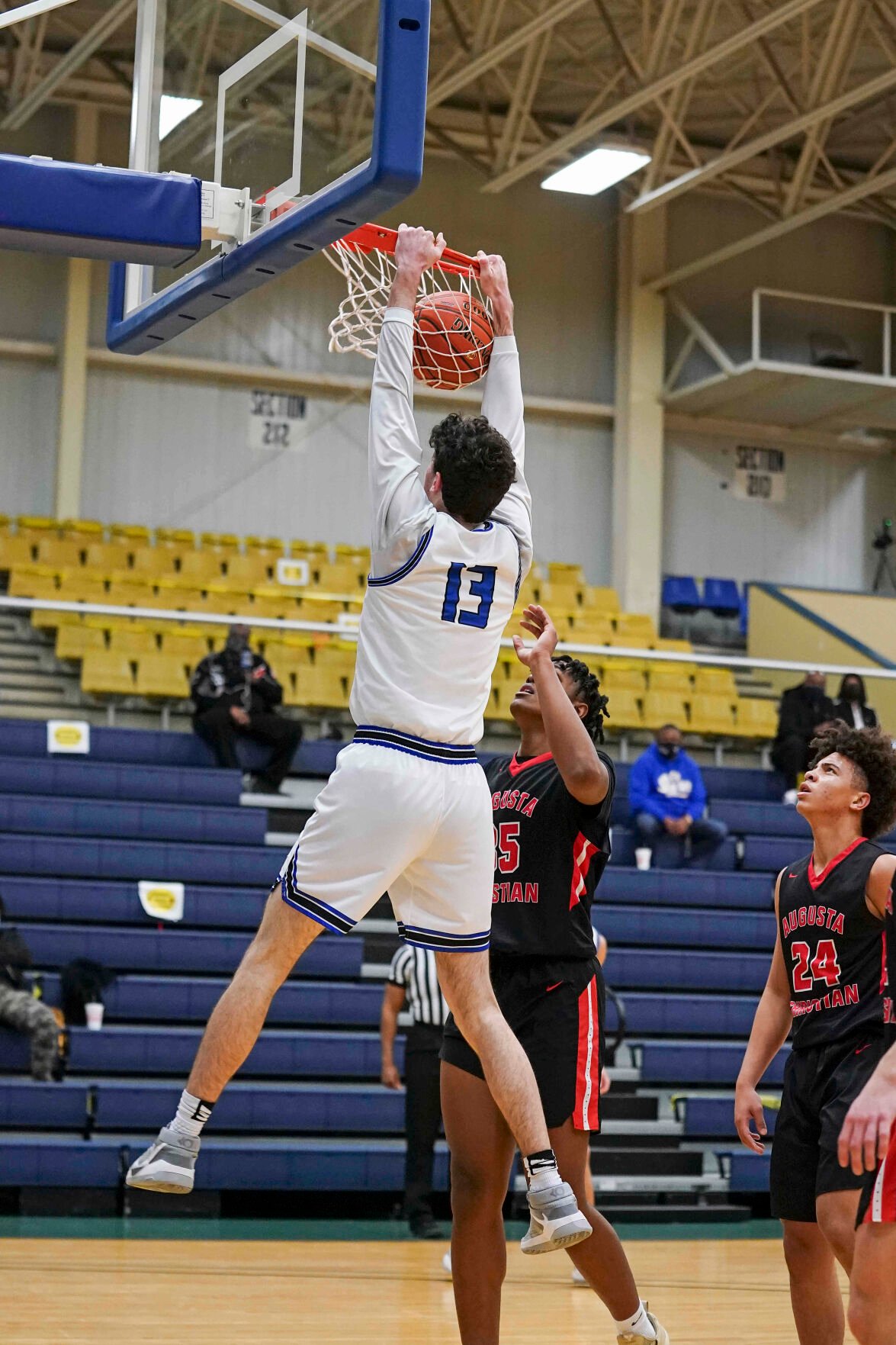 Griffin Folse (13) bends the rim with a powerful dunk during Trinity Collegiate’s 78-66 victory over Augusta Christian on Friday in the SCISA 3A semifinals at the Sumter Civic Center. 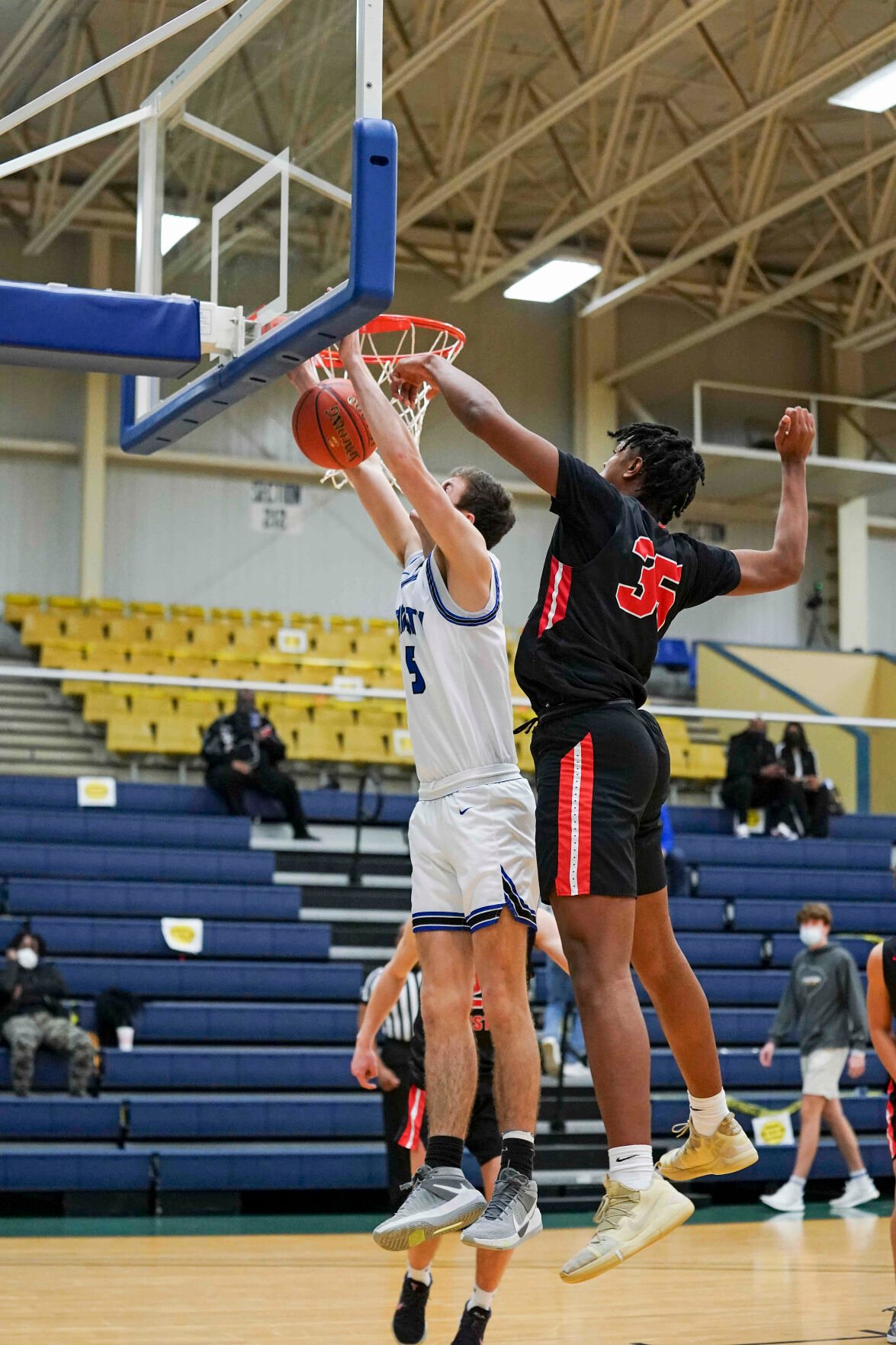 But the ones that were remember the feeling, coach Mike Teasley said.

“They remember what it felt like not to be able to win that thing last year,” he said. “So they wanted to be playing (Saturday) at 6:30 p.m.

“Kudos to them because we will be.”

Bolstered by a strong first half, the Titans were able to withstand a third-quarter charge by Augusta Christian on Friday to pull away for a 78-66 victory at the Sumter Civic Center and a return trip to the title game.

TCS will face the Porter-Gaud/Northwood victor (the result was not available at press time) on Saturday at 6:30 p.m. for the 3A title.

“It feels great … I feel great,” Teasley said. “I’m so proud of our kids. This was a big day for us. We struggled the last game that we had, but it was a wake-up call for us. We got a chance to get locked in against a very good team today in Augusta Christian.

“I’m just proud of our kids. It says something about our program that this is my second year here, and we’re in the finals two years in a row. I can get used to that.”

Teasley could also get used to how his team started out against the Lions. The Titans scored the first six points of the contest and led 12-4 in the early minutes behind LeBron Thomas and Griffin Folse, who combined for 15 points in the opening stanza.

By the early second quartTrinity’s lead had ballooned to 10 and TCS’ advantage grew to 13 by halftime, 40-27.

The Lions did not go away quietly though. Down 46-33, AC went on a 10-0 run highlighted by 3-pointers from Cam Slade and Trey Mosley to cut the deficit to just three points with 3:51 left in the third.

“This is playoffs — we expect that,” Teasley said. “They’re a well-coached team. Their coach does a great job with them. I knew they would come back and they would punch in the second half and make a good run at us. So we were going to withstand that and make a run of our own — that’s what teams do to get to the finals.”

Teasley’s team responded just as its coach wanted with a big 3-pointer from Tre McLeod that set the tone for a 13-2 run to close out the third stanza and all but squash any hopes the Lions had of a comeback.

AC never got closer than 10 the rest of the way as Trinity’s balanced offensive attack and presence on the boards kept AC at bay. Thomas had 22 to lead the way, but Dalon Edwards (12), Bewan Belle-Bonza (12) and McLeod (11) all finished in double figures.

Folse had nine while Bessanty Saragba and Matthew Warren added six each. Folse, Saragba and Warren all finished with at least five rebounds while Thomas posted nine.

Augusta’s Elijah Crawford led all scorers with 24 points followed by Mosley with 14, Luke Wilson with 12 and Johnny O’Keefe with 11.

Griffin Folse (13) bends the rim with a powerful dunk during Trinity Collegiate’s 78-66 victory over Augusta Christian on Friday in the SCISA 3A semifinals at the Sumter Civic Center.