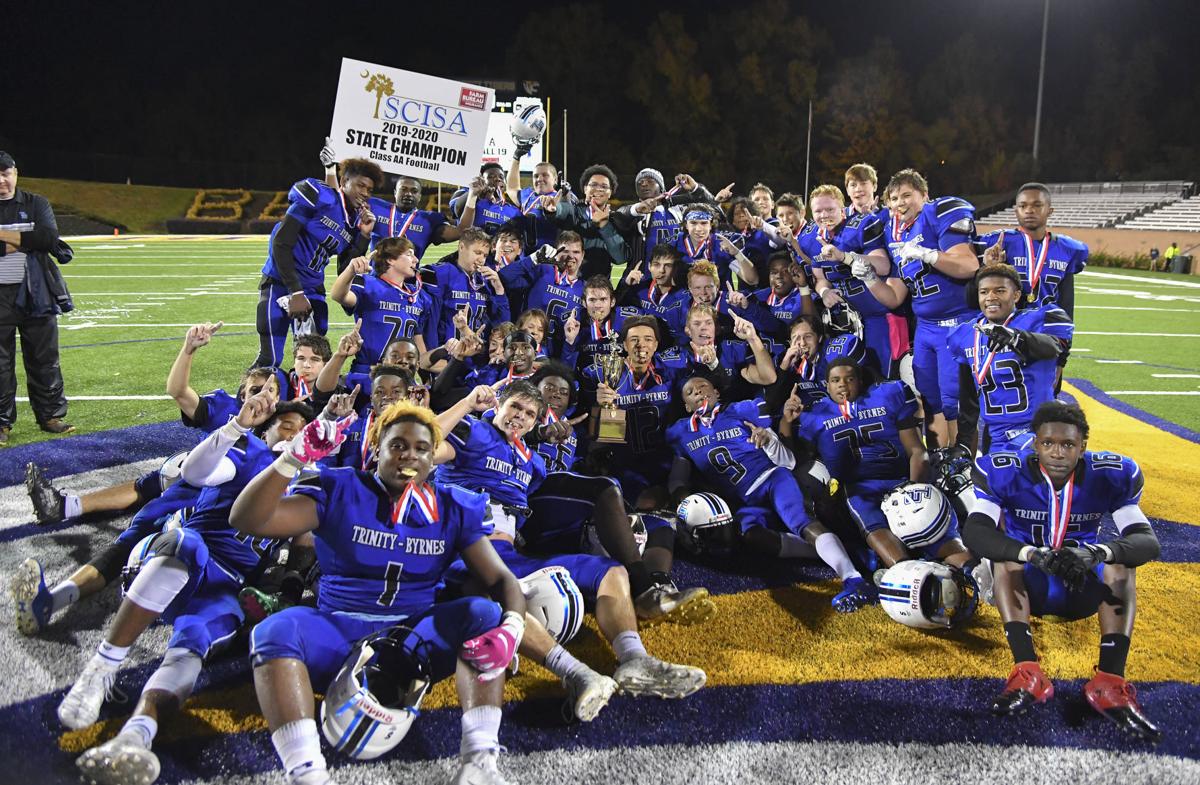 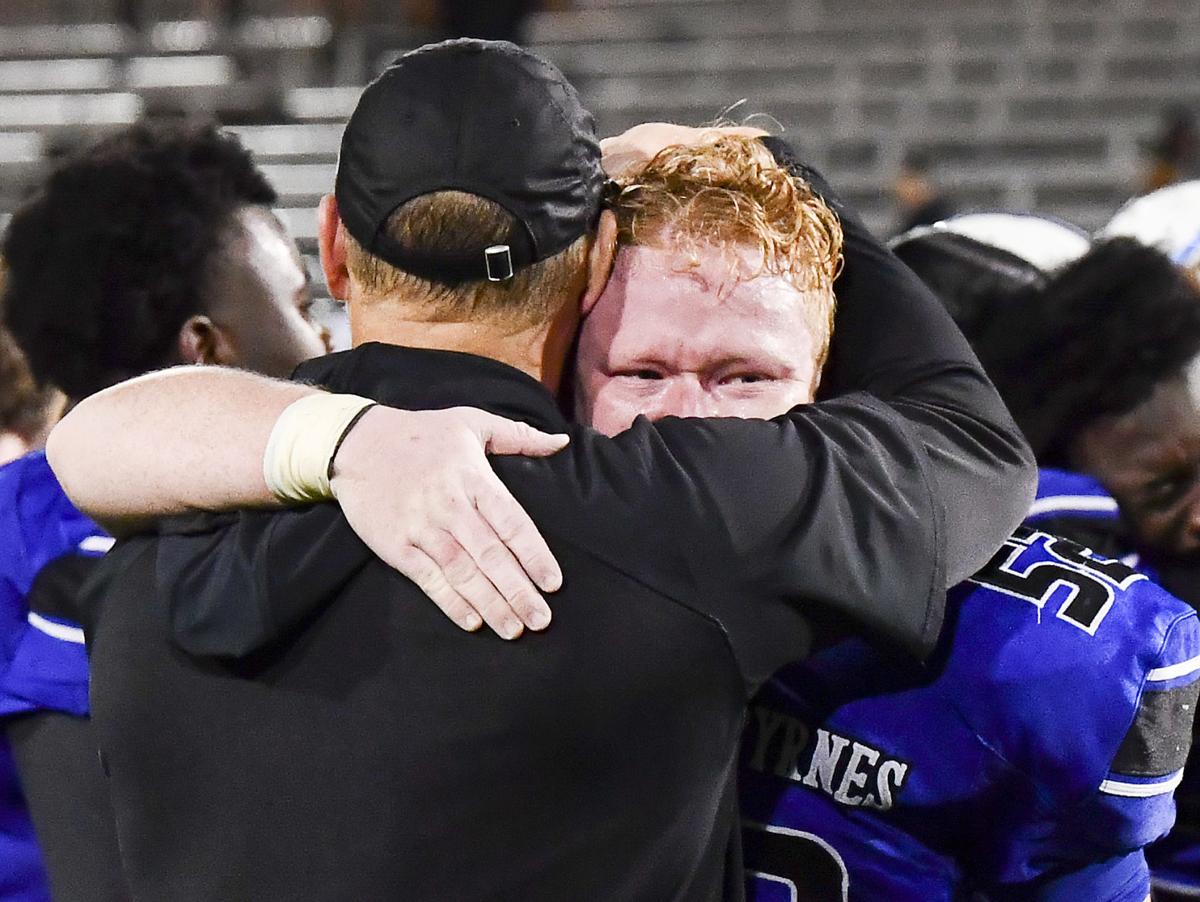 Michael Roach (52) sheds some tears as he's hugged by coach Jared Amell after winning the SCISA Class 2A state championship game at Charlie W. Johnson Stadium in Columbia on Saturday. 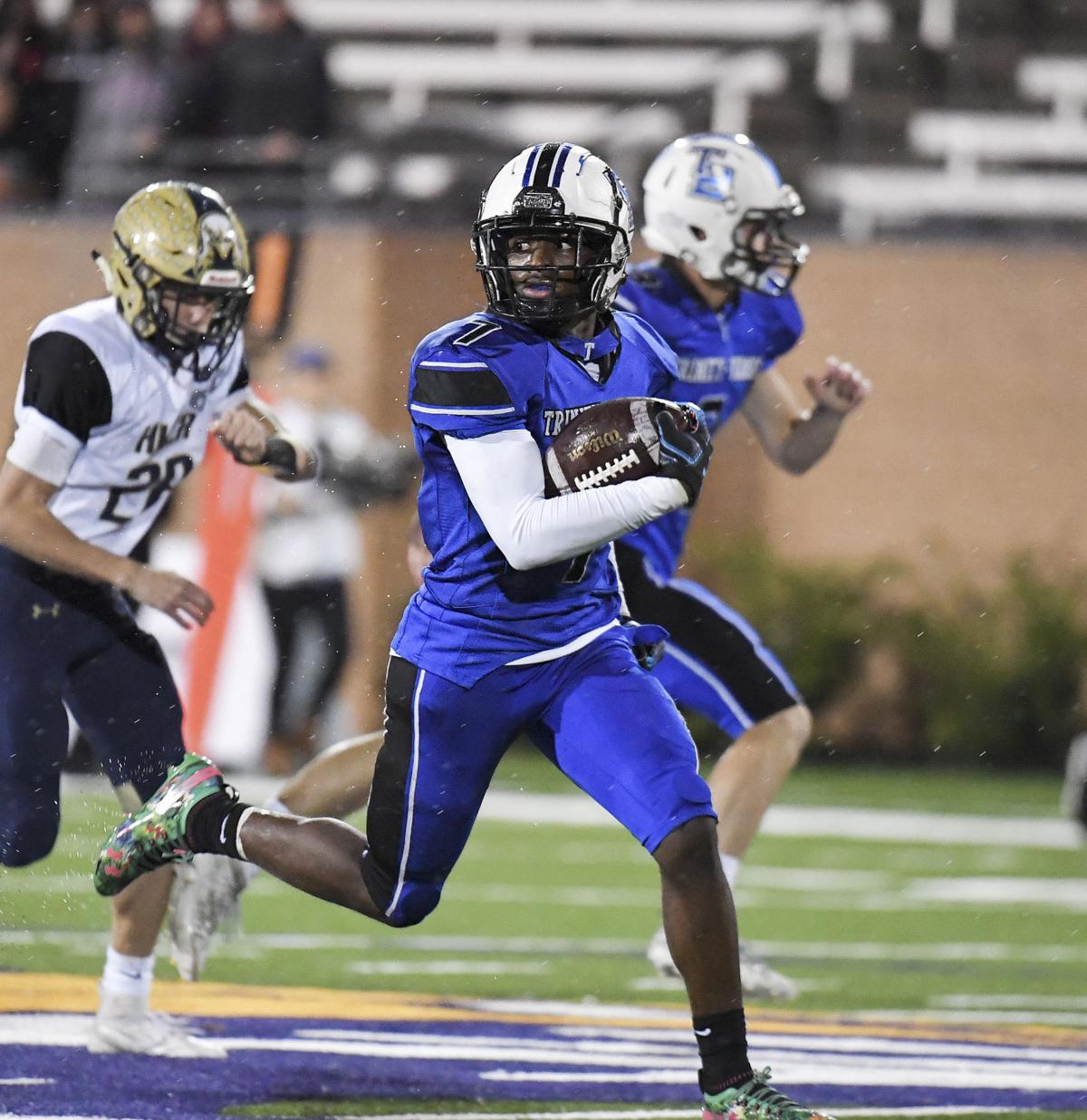 The same went for Jared Amell, who finally reached the mountaintop after spending the last 14 seasons trying to get there.

Whether it was the leftover raindrops or tears of joy, the faces on the Trinity-Byrnes’ sidelines said it all Saturday night as the Titans’ “Redemption Tour” made one final stop in Columbia to pick up some hard-earned hardware.

Lambert’s 5-yard touchdown run in overtime capped a wild back-and-forth game with Hilton Head Christian Academy as the Titans outlasted the Eagles 55-49 in the SCISA 2A championship game at Charlie W. Johnson Stadium.

It’s the first state championship in school history and also a measure of redemption for many of the players and coaches after falling just short each of the past few seasons.

To say the outcome was in doubt would be an understatement as wet conditions, turnovers and a pair of high-powered offenses provided a roller-coaster of emotions throughout the evening.

“It wasn’t easy,” said Amell, whose team finished the year 14-2 overall. “It had its highs and its lows. At times it looked like it might not happen, but my kids kept fighting, kept persevering.

“My defense remained opportunistic and my offense did what they needed to do.”

Eagles quarterback Hayden Shinn was every bit as advertised — completing 20 of 35 passes for 313 yards and seven touchdowns as Hilton Head Christian went score-for-score with Trinity for the better part of the last three quarters.

But it was the five interceptions that eventually proved too costly. One came at the very end of regulation, but a high snap contributed to a missed potential game-winning field goal as time expired.

No matter, as Shinn’s final interception in overtime to Tre’ McLeod gave the ball right back to Trinity.

Trinity’s run game was near unstoppable all night. Lambert, Reggion Bennett and Nick Jones combined to rush for 462 yards.

The final score was Lambert’s third of the game, but it was Nick Jones who took things over at times. The Titans’ senior rushed 26 times for 289 yards and four touchdowns and also returned a kickoff 99 yards for a score following a HHC touchdown in the second quarter.

“I just feel a lot of pride that I got to play with this team. My Titans,” Jones said. “It’s really hard to describe. I wish I had another year to play with them, but this is pretty special.”

Bennett added 103 yards rushing for Trinity-Byrnes, which went up 14-0 early in the game before eventually falling behind in the third quarter, thanks in part to a trio of turnovers.

But the Titans maintained their composure and never let the Eagles get up by more than a score.

“We never let it get out of reach,” Amell said. “We let it get in doubt a couple times, but it was never more than eight (points). We knew if we were down one score with our offense, we’ll take those odds any day of the week.”

Michael Roach (52) sheds some tears as he's hugged by coach Jared Amell after winning the SCISA Class 2A state championship game at Charlie W. Johnson Stadium in Columbia on Saturday.